Let’s get this out of the way right off: Yes, as has been widely reported, there is a plethora of penises in Euphoria‘s second episode.

I’ll skip the argument about how a female version of the same scene would never have raised such a pop cultural fuss. Because focusing on the hour’s fleeting moments of full-frontal male nudity is to miss its greater message about the violent and far-reaching effects of toxic masculinity. And given that Nate, in particular, seems like a human red Solo cup full to the brim with bad social programming and harmful decisions?

A bunch of nekkid nether regions seems rather benign in comparison.

Read on for the highlights of “Stuntin’ Like My Daddy.” 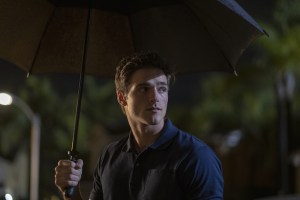 As Rue’s voiceover explains what we’re seeing, we move through Nate’s childhood and early teendom. He was on a rigid diet and workout schedule by age 12. He joined the football team as a freshman and was captain and starting quarterback by year’s end. “But he hated being in the locker room. He hated how casual his teammates were about being naked,” Rue notes as we watch Nate’s pals celebrate a victory sans clothing while he tries to avert his eyes from any jiggly bits. We also learn that Nate despises his mother and brother for being weak, and he has a long list of what is and isn’t acceptable re: female looks, wardrobe and comportment. (Essentially, dude likes ultra girly-girls who seem like they’d be the prey of sickos who’d want to hurt them.)

Enter Maddy, whom Rue tells us Nate liked because she was “basically hairless” and whom he fantasized about protecting with a gun and a bullet to the perp’s brain. “He also liked that Maddy was a virgin,” Rue adds, which is part of the reason that he went off in extreme fashion the night he saw her in the pool at McKay’s party. After all, “He knew he had anger issues, but so did every guy,” Rue explains. By the way, Cal is a simmering, menacing, gun-toting presence throughout this entire troubling montage. “No one in this world will ever root for you. They will see what I see, and they will despise you for it,” he warns Nate at one point. “Just don’t ever give them an opening.” 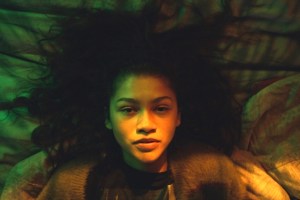 WHAT I DID ON MY SUMMER VACATION | On the first day of school, Rue is in a chipper mood. “I had made a new best friend, and for the first time since rehab, I was feeling good about the world,” she tells us. Via flashback, we watch as Episode 1’s final scene continues: She and Jules take the synthetic psychedelic she got in the premiere, and have a sparkly, cheery time as its effects kick in. Drugs are super cool, she tells us via voiceover, until they’re not.

That’s when we go back to when Gia called the EMTs after finding her sister unresponsive after an overdose. Later, when Rue is called up on stage during a drama class, the teacher asks her for a memory from the summer. We get a jumble of them — Rue waking up in the hospital with her mother and sister sleeping by her bed, Rue singing in the car while her sister giggles — but she freaks and runs out of the class to snort some crushed pills in the ladies’ room. Lexi follows her, startling Rue, who quickly flushes the drugs so she won’t get caught but gets mad when she realizes it was all for naught. She tells Lexi they’re not friends, but Lexi counters that Rue will probably change her tune the next time “you knock on my door, asking me to piss in some Tylenol bottle.” Good point.

RUE’S LATEST TRIP | We learn a bit more about Rue’s history, and it’s all sad. She first tried Oxycontin when she was 13, taking care of her ailing father after school while her mom worked a second job to help cover the bills. It’s heartbreaking, seeing her high and him out of it with pain and meds while they lay on her parents’ bed and watch television.

She’s also been faking going to Narcotics Anonymous meetings, as we see when she blackmails a proctor there into signing her slip. At school, she worries that everyone is looking at her weirdly. Jules is unsympathetic. “I don’t want to turn this into a competition, but I win,” the blonde says playfully, displaying her bandaged arm. “For, like, a multitude of reasons.” When the pair ride bikes later, Rue asks her new friend to come over for dinner on Sunday. “Are you talkin’ to your mama about me?” Jules teases her before riding off.

On the way home, Rue stops at Fezco’s place for more drugs and because she got caught in a rainstorm. He urgently tells her to leave, but it’s too late: His very scary supplier has just arrived with a new shipment, and the older man has a more than casual interest in Rue. There are multiple guns in the room and the tension is super thick when the supplier offers Rue some fentanyl off the edge of his knife, despite Fezco’s repeated protests. “Please God,” she voiceovers, “do not let me die tonight” as she opens her mouth and ingests the drug.

After she’s keeled over on the couch, the supplier goads Rue into saying that she wants more. But she doesn’t have the $300 he’s asking for, and when Fezco says he’ll cover it — anything to get the creepy guy gone — the supplier balks. He eventually accepts $600 and leaves; a worried/pissed Fezco covers Rue with a blanket and readies the Narcan (just in case), then sits beside her. “I’m so happy,” she whimpers, completely insensate.

He eventually calls Jules, who assumes responsibility for her passed-out friend. While Rue sleeps it off at Jules’ place, Jules texts with “ShyGuy,” the latest dude from the dating app, who has been messaging her all day and who doesn’t immediately come across as a terrifying sexual predator. Aces! 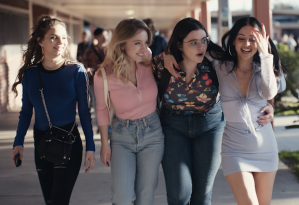 AROUND SCHOOL | Everyone now knows Kat had sex with some guy, but when a video of the incident surfaces, she and one of McKay’s brothers go on a campaign to convince the whole school — including the administration — that she’s not the female depicted. And even though she succeeds in getting the original video taken off the Web, it doesn’t matter, because of course people have made copies. Internet’s gotta Internet, after all. Eventually, off a suggestion on one of the videos, she signs up for a live cam account.

Meanwhile, McKay visits Cassie but is irked when she doesn’t seem to care about his college-football woes and only wants to make out. Later, though, he texts to apologize… and ask for a couple of nude shots. Of course she obliges.

BREAKING, ENTERING, BREAKING AGAIN | And now we get to the night’s most disturbing storyline. Nate stalks Tyler, Maddy’s in-pool paramour, as he works at a mall kiosk. He later breaks into the guy’s apartment and waits for him to come home. “I’m the boyfriend of the girl that you raped on Saturday night,” Nate informs a startled Tyler, who starts to cry when he learns that Maddy is 17, and therefore a minor (though I think the tears are more about the beating he’s going to take than any transgression he might’ve made). Tyler begs Nate not to hurt him, but Maddy’s calm and very creepy boyfriend clearly has other plans. Every time Tyler denies that he violated her, Nate hits him harder. 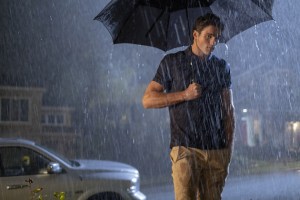 When Nate is done, he showers and dresses in Tyler’s clothes while his victim lies on the floor, bloody and cowering. Then Nate takes Maddy on a bowling date and asks a whole bunch of questions about Tyler. She’s noncommittal. Before he drops her off, he gives her a present, which turns out to be pink lingerie. “Eew,” she says when she’s out of his earshot.

At the very end of the episode we see that Jules’ ‘ShyGuy’ is actually Nate. But he tells her his name is Tyler.