Benjamin Charles Watson didn’t just join Designated Survivor for Season 3. No, he found himself jumping in with both feet, as White House Digital Officer Dontae Evans got pulled into the frenzy of an election campaign (and the illegal antics that can come with it), endured a daylight mugging and also tumbled into a torrid romance with Secret Service agent Troy Bae.

Watson also landed smack dab in the middle of some of the more mature themes that Season 3 embraced in its new, more liberal Netflix home — whether partaking in the saltier language or breaking down the complexities of an undetectable, HIV-positive status.

TVLine spoke with Watson, previously of The L.A. Complex and The Killing Season 3, about mixing it up with TV icons, Dontae’s difficult decisions, and catching viewers by surprise with that abrupt sex scene.

TVLINE | [Showrunner] Neal Baer came by my office in New York about six weeks go, and he talked about how one of his goals was to give Kiefer Sutherland some new heavyweights to play with — like Anthony Edwards, Julie White — in addition to the returning cast. What was it like for you to walk in and be a part of that crowd?
Oh, man, honestly, it was really scary. You have Kiefer Sutherland, and you have Kal Penn, and I’d known Italia [Ricci] for a long time — I put her on tape for her first leading role — so it was amazing seeing her grow as an actress and as a woman. So while coming on was scary, I knew Italia and I had a lot of scenes with Italia, so she kind of took me under her wing and showed me the ropes, which I found phenomenal because I haven’t shot a full series since, like, 2011, 2012.

Kiefer was phenomenal; that guy is incredible. Like, working one-on-one with him is always spectacular. He’s such a giving actor, which is the best thing that you could possibly ever want.

TVLINE | And Julie White seems like a real dynamo. I mean, Lorraine is a pisser.
The thing about Julie is sometimes she’ll add little things and you’re like, “What the…?” Because you just never know what she’s going to say! [Laughs] She’ll add a button or something on a line, and it fits her character so well. So many times when I was working with her, I was like, “I love this woman so much.”

TVLINE | What was most important to you about portraying Dontae?
The most important thing to me was to make sure that the character was relatable. I also wanted to push how strong he is as a person. The whole being gay aspect, I didn’t want that to overshadow who he was because I think it’s very important that Dontae’s work is really important and kind of comes first. Him being gay or HIV-positive…  that’s a part of him, but that’s not all of who he is as a person. So I needed to make sure to push his power and everything he wanted to accomplish while being in the White House, because him pushing these agendas and issues onto Kirkman, I think, is very vital and important.

TVLINE | Neal Baer also told me that the physician in him wanted to bring to light the rate of HIV amongst people of color. What did you think about Dontae not telling Troy (played by If Loving You Is Wrong‘s Eltony Williams) up front? Because that was definitely a debatable decision.
Yeah, it’s really, really, really, really debatable. There are some states in the U.S. where if you don’t disclose [your HIV-positive status], you can be criminally charged. Specifically for Dontae, I did a bunch of research because I had to think about why he did not disclose his status. Like he said repeatedly, so many people have discriminated against him that he felt hurt, shunned. It was kind of a barrier for him. And then later on — because he was undetectable, and because they did use a condom — he thought, “Hey, we are safe.” He knows that he’s not going to transmit anything to Troy. But I’m not going to lie, I was wrestling with that for the longest time. All he wants to do is to find love. So while he took a pretty big chance, it kind of worked out that Troy decided to go on PrEP and they made it work.

TVLINE | Burning question: What happened to the guy that Dontae introduced Seth to in the season premiere? Fill in some blanks, because next thing we know, Dontae is eyeballing Troy at the White House.
[Laughs] Yeah, I know. That’s come up so many times…. Look, Dontae loves his boyfriend, but he can’t help but love a man in a suit.

TVLINE | Dontae and Troy’s sex scene isn’t something that TV sees a lot of, and to read TVLine comments, it caught some viewers off-guard. Were you surprised by how out front it was?
Honestly, no. No, I wasn’t. Looking back, I hadn’t really seen this on mainstream TV, two gay black individuals having sex. Maybe on, like, other networks or YouTube Red or something like that, but—

TVLINE | Because it wasn’t foreplay. It wasn’t post-coital. It was to the finish, and it was physical.
You see Troy and Dontae when they literally pass by in that hallway… and then they’re doing it. It’s raw. It’s invigorating. It’s sexy. It’s just like, you need to get those feelings out. So, yeah, it’s not post-coital and it’s not foreplay to begin with. I think it was important to come right in the middle of it to start their relationship with this positive, electric feeling.

TVLINE | “Let’s not waste time with scenes of texting back and forth, and maybe they grab a drink.” This was really the launch of their relationship.
Absolutely, and I kind of hate to say it, but in some ways it’s realistic. You may go for a drink and stuff like that, but with all of the stuff that’s happening [with Dontae at work], sometimes you just need a little release. They connected on a physical level, and they jumped right into bed. I’m totally OK with it.

TVLINE | Speaking of realism, some have also been taken aback by the language in Season 3, which Netflix allows writers to play with — but it’s honest, right? Not necessarily just in these strange times, but in general, people probably swear in the White House.
Oh, God, 100 percent. I kept seeing a lot of that, mostly in Facebook comments, people complaining about the language that we’re using now, but the whole thing is that Season 3 is a lot more realistic than it’s ever been, to match real life. If anyone thinks that no one swears in the White House, you’ve got to be kidding me. With all the things that are happening in the White House, they’re not going to be prim and proper with language. It’s realistic language. 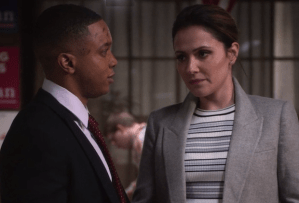 TVLINE | What are your favorite dynamics to play? Between Dontae and which characters?
I would say Dontae and the president, for sure…. I have a lot of scenes with Italia [as Emily], which were really great…. My scenes with Kal were amazing, also…. I actually loved every single scene and character that I interacted with.

TVLINE | They really let you play with everybody, which was awesome.
And I really, really enjoy that so much. Even getting to play with Julie [White], who is such a firecracker; it’s incredible watching her work.

TVLINE | As you watched Episode 9, did you get mad at Dontae for, unwittingly, hounding Emily right after her mother had died? As a viewer, were you yelling at him, like, “Dude! Not now”? Because I sure did.
It’s hard. Like, I want to say yes, but I know that Dontae needed to get that done right away. He needed Emily’s help so badly.

TVLINE | He was on a mission to save democracy!
Hundred percent. Like, I’m sorry your mom died, but you have to help save the president of the United States. Watching that scene, and I feel horrible for Emily that her mom’s just passed, but I’m kind of on Dontae’s side because we need to get this s—t handled.

TVLINE | What are your hopes for Season 4, if there is one?
I want to see Dontae interact more with the White House. Like, I want him working with the president a lot more closely to accomplish something. You see in one of the episodes, Dontae’s petrified of the campaign finishing because, then, what exactly does he do? But then Emily says that the president likes you, he will take care of you.

TVLINE | Dontae could take a cue from AOC and have Kirkman do some Instagram Lives.
Oh, that would be actually really interesting.

TVLINE | Have Tom making PB&J sandwiches for Penny while talking about international policy.
Absolutely. You need to see this man is just a regular dad, and he has the ability to run a country!