The following post contains spoilers for the series finale of Marvel’s Jessica Jones.

At the start of Jessica Jones‘ third and final season, the titular P.I. wasn’t exactly an ideal hero. Sure, she did good deeds — but they sometimes involved flinging a single father across a sandy beach, or humiliating a psychopath in front of two dozen middle schoolers.

By the time Season 3 concludes, though, Jessica seems to have a much stronger grasp on what it means to save the day, even when it comes at an enormous cost. Before you tell us what you thought of the Netflix drama’s final hour, let’s recap what went down:

The episode picks up immediately after Salinger’s grisly murder, for which Jessica instantly knows Trish was responsible. She seems conflicted, though, about how to handle Trish’s recent killing spree — and she gets some unexpected guidance from Luke Cage (!), who shows up outside Alias Investigations after seeing Jessica on the news quite a bit. Luke tells Jessica the story of his half-brother, Willis, who appeared in Luke Cage‘s first season and did a lot of bad things. Luke ultimately sent Willis to the Raft, an underwater prison for powered people, and he tells Jessica that “it killed me to do it, but it was the right thing to do.” Hint, hint, Jessica. 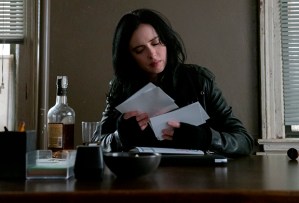 The remainder of the finale, then, is largely dedicated to Jessica and Trish’s final showdown. I’ll spare you the minutiae — Jessica finds Trish, Trish gets away, Jessica finds Trish again, yadda yadda yadda — but the two women eventually have their final confrontation in a cargo bay at an infrequently trafficked airport. With Jeri’s help, Trish had planned to get safe passage out of the country, which would have involved laying in a metal box for the duration of a 17-hour flight to Thailand. But Jessica intervenes at the last moment, and the sisters finally have the one-on-one fight that has been brewing all season long.

Jessica informs Trish that she has essentially turned into her mother, and she fears Trish won’t stop killing now that she’s a morally bankrupt vigilante. “Who else are you going to kill? Am I next?” Jessica asks Trish. “Go ahead, Trish. Prove me right.” And, stunningly, Trish does: Brandishing a knife, she lunges at Jessica, and when Jessica holds out an arm to stop Trish in her tracks, she sees that Trish’s dagger has gone right through her hand — confirming that Trish had every intention of killing her sister, if only she could have gotten close enough.

In the end, Jessica knocks Trish unconscious, then turns her in to the authorities. (And, as Det. Costa reads Trish the long list of charges against her, an alarmed Trish finally sobs, “I’m the bad guy.” That’s sorta what we’ve been getting at this whole time, Patsy.) Then, Jessica decides to leave Alias Investigations — and New York City — behind, handing Malcolm the keys to her office/apartment as she leaves. “Don’t screw it up,” she smirks, then makes a quick pit stop to watch police officers drag a shackled Trish onto a helicopter.

The final scene finds Jessica at the train station, where she approaches the ticket booth and requests a one-way trip to “as close as you can get to Mexico” — which turns out to be El Paso, Texas. But just as the clerk slides the ticket over to Jessica, she pauses, suddenly hearing Kilgrave’s voice in her head. “Jeeeessicaaaa,” he taunts. “You’re right to give in. Give up. It’s someone else’s job now.”

Never one to let Kilgrave defeat her, of course, Jessica decides not to take the trip to El Paso. Instead, she turns around, smiles and makes her way back out of the train station.

That’s a wrap, Jessica Jones fans! What did you think of the show’s final episode? Cast your votes in our polls below, then drop a comment with your thoughts!