The following post contains spoilers for the final season of Marvel’s Jessica Jones, up to and including Episode 7.

Marvel’s Jessica Jones has never been one to back down from a fight. But in the drama’s third and final season, there was one confrontation Jessica should have walked away from, according to the woman who portrays her.

In Episode 7, titled “A.K.A The Double Half-Wappinger,” Jessica and estranged sister Trish Walker take a road trip to Wappinger Falls, the small town where this season’s Big Bad — serial killer Gregory Salinger — was raised. Having reached a dead end in Hell’s Kitchen, with no substantial evidence that would get Salinger arrested for murder, Jessica and Trish head to his hometown, in the hopes of finding some breadcrumbs that will lead them to one of Salinger’s first kills.

Halfway through the installment, Jessica does find something, and it’s big: She uncovers the body of Nathan Silva, a teenager who was on the wrestling team with Salinger when they were both in high school. Nathan had been declared missing for decades, but Jessica ultimately found the boy’s corpse buried under a gazebo in his parents’ backyard. (Murder investigation is so simple when you can just lift a gazebo with your bare hands, no?) 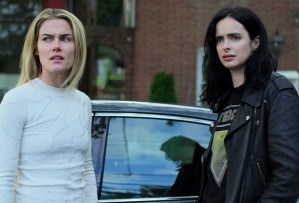 Sickened by their discovery, Jessica and Trish return to New York City, and Jessica tracks down Salinger at a local middle school where he coaches wrestling. When Salinger spots her waiting in the hallway, he invites her into his wrestling practice, then challenges her to a match with him in front of all his students, taunting her all the while that she can only win a fight if she uses her powers. Then, during the fight, Salinger pins Jessica down rather quickly — but when she whispers, “Is this the hold you used to kill Nathan?,” Salinger is stunned, and Jessica uses his moment of shock to throw him across the gym floor. Much to the students’ delight, Jessica gets a few more hits in, eventually pinning him down with her foot.

“They’ll see who you are. They’ll all see you,” Salinger warns Jessica, who merely responds, “Let them. Class dismissed.”

When asked about Jessica’s episode-ending victory, star Krysten Ritter said she “struggled with that scene,” because she didn’t agree with her character’s behavior at the time.

“I didn’t totally think that Jessica would do that,” Ritter admits. “And then once you get there, you’re like, ‘OK, I get what she’s doing.’ [But] she takes it too far. Jessica f—ks it up.”

Indeed, Jessica’s win in the wrestling match does have a negative effect, prompting Salinger to become even more ruthless in the episode that follows. But Ritter says she came to understand Jessica’s decision, because the character is very much still learning how to be a proper hero in Season 3.

“She shouldn’t have done that. That wasn’t the right move,” she says. “And that’s part of her superhero journey is making the mistakes, not knowing what to do.”

Series creator Melissa Rosenberg agrees with Ritter’s sentiment, explaining that it’s “classic Jessica” for the heroine to impulsively humiliate an enemy, without thinking about the long-term ramifications.

“That’s part of the fun of watching her. She’s probably going to do the wrong freaking thing, but there is something really satisfying about it,” Rosenberg shares. “[Salinger] controls everything, and he doesn’t have [control] in this situation, and that triggers him. It makes it much worse. But in that moment, she had this thing.” (With reporting by Scott Huver)