Euphoria‘s central character, Rue, is a teen who craves the nothingness of oblivion and will ingest just about any substance to chase it. This is no great analysis — the character, played by Zendaya (K.C. Undercover) tells us as much, voiceover-style, throughout the premiere of HBO’s new drama. And as we watch Rue and her friends in the lead-up to a suburban house party, we see the various, often harrowing ways that America’s youth approaches its modern rites of passage.

In a moment, we’ll want to know what you thought of the series’ premiere. But first, a quick recap:

Rue tells us she was born three days after the Sept. 11 terror attacks and was diagnosed with an array of mental health issues (OCD, panic attacks, possible bipolar disorder) as a young child. She has a younger sister named Gia, whom she loves deeply; their dad died when she was 13, and both girls now live with their mother. Rue routinely pops her mother’s Xanax and overindulges in drugs and alcohol; after she overdoses at home — Gia finds her unconscious, lying in her own vomit — Rue winds up in rehab the summer before her junior year of high school.

“I had no intention of staying clean,” she tells us not long after she arrives back at home. “And Jules had just moved to town.”

When we meet Jules (played by model Hunter Schafer), she’s about to meet up with someone whose dating app name is “DominantDaddy.” Upon arriving at the motel for their rendezvous, she has second thoughts, but he sends her a photo of some sparkling wine and two glasses, so she soldiers on. At first, we don’t see exactly what DominantDaddy looks like, but he’s got a creepy, whispery air as he inserts his thumb into Jules’ mouth in a move that is supposed to be seductive but makes me want to gag. When the camera pans up, we see “DominantDaddy” is played by Eric Dane (The Last Ship, Grey’s Anatomy). Gives a whole new, rather icky connotation to “McSteamy,” eh? He rips her tights, has forceful sex with her, then takes a shower. On the bedside table, DD’s phone buzzes; when Jules picks it up, the lock screen is a studio portrait of him with what looks like his wife and young sons. Jules quickly dresses and leaves. 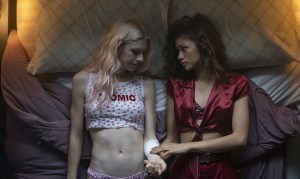 Both Jules and Rue wind up at a party at the home of a high school football player named McKay (played by The Hate U Give‘s Algee Smith). Various teen milestones are met amid the booze quaffed, pills popped and joints smoked. Kat (played by Divorce‘s Barbie Ferreira), the “fat girl” of the group, loses her virginity in dehumanizing fashion, then reports it with faked enthusiasm to her friend. Cassie (played by The Handmaid’s Tale‘s Sydney Sweeney) has sex with McKay — who seems like the least neaderthal-like of the jocks we meet — but has to tell him to stop when he tries to initiate some porn-inspired violent moves during the act. Elsewhere, Rue confesses to her drug dealer Fezco (played by newcomer Angus Cloud) that she’ll do whatever she has to to keep her panic attacks at bay; it’s her “way to live,” even though it may kill her. And in the pool, Maddy (played by Ray Donovan‘s Alexa Demie) has very public sex with a very willing lunkhead just to get back at her ex, Nate (The Kissing Booth‘s Jacob Elordi).

The discovery of this last incident throws Nate into a drunken rage, and when Jules happens to be in his sights, she becomes his target. He rages, getting more and more threatening as he wonders exactly who she is, but she shuts him down by slicing her own arm with a kitchen knife and screaming, “I’m f–king invincible!” Nate backs off, fast, while the rest of the party stares. “By the way, I’m Jules,” she announces. “I just moved here.” The spectacle grabs Rue’s attention: Outside, she introduces herself and asks if she can go home with Jules.

Rue helps her new friend bandage her arm, then they lay in bed together. That’s where it becomes apparent that Jules is transgender. (An earlier shot of her injecting something into her tush makes a lot more sense now.) “I’ve got an idea,” Rue whispers. “Wanna get high?”

Somewhere else in town, Nate arrives at his home in the early hours of the morning. As he ascends the stairs to his bedroom, we see that the same portrait that was on “DominantDaddy’s phone is hanging on the wall: Looks like DD is Nate’s actual dad.

Now it’s your turn. What did you think of the episode? Grade the premiere via the poll below, then hit the comments to expand upon your thoughts!