It sounds like a painful new form of torture from Shawn and the Bad Place, but it’s true: The Good Place is ending after next season.

Thankfully, though, NBC’s gleefully inventive afterlife comedy gets to end on its own terms — terms that have been in place for a few years now, actually. Creator Michael Schur revealed, when he announced the final season last week, that he’d been planning how to end the series since way back in Season 2. And there’s plenty still left to wrap up as we enter Season 4, with Chidi getting his memory wiped (and forgetting his entire relationship with Eleanor in the process), along with the lingering mystery of why the Good Place hasn’t admitted a single new human in more than five hundred years.

TVLine reached out to Schur to find out why he decided that now is the right time to shut the pearly gates of The Good Place — in his words, the show’s mantra is “you blow everything up before it gets boring” — and, of course, we had to fish around for hints about the final season, too. Read on to learn why Schur is actually filled with “a tremendous amount of personal, emotional regret” about the show ending, how Chidi’s sacrifice sets up the final season… and to get a tantalizing preview of the series finale. 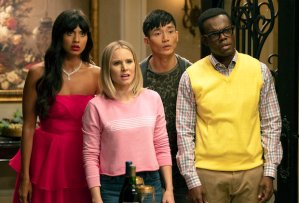 TVLINE | We now know that next season will be the last season. But you’ve known roughly when you’ve wanted to end it since the start of Season 2, right?
Yeah, we finished Season 1 and got picked up, and we’d already worked a little on Season 2 during Season 1. When we figured out that the big move at the end of Season 2 was that they were going to be sent back to Earth, which was pretty early in Season 2’s discussion, then it became even more evident. It was like, “Alright, if that’s Season 2, and Season 3 starts on Earth… and that suggests what Season 4 will be”… it just became clear that that was the end. There were a couple moments here and there where it was like, “Well, wait a second, maybe there’s this thing that could get us into Season 5.” There were a couple moments where it felt like, “You know what? Actually, if we hustled and we really crammed everything in, we could probably finish it in Season 3.” But pretty steadily, from the end of Season 1 and the very beginning of Season 2, it seemed like four years was the right number of years. We waited until we were absolutely, one hundred percent sure, and that happened at the end of last year.

TVLINE | When you say you had times where you considered expanding it to a fifth season, what were some of the storylines that you wanted to explore a little further?
Well, the show kind of moves in chunks. There was the chunk of time at the beginning of Season 2 when they were going through all the reboots, and then there was the chunk of time where Michael was learning to think of things from the human perspective, and then there were chunks of time in Season 3 when they were on Earth. And so we would say, “Let’s say they’re on Earth for four episodes before they catch Michael in the act, and Michael has to fill them in on everything that happened.” Well, that might be fun to keep them on Earth in a state of not knowing, and so maybe that’s not four episodes. Maybe that’s eight or nine or ten. It was things like that, where we would take the scenarios we were exploring and say, “Ooh, maybe there’s more life there.” And we could extend those a little longer.

But the show has always operated on this M.O. that you blow everything up before it gets boring. The original premise of Eleanor hiding in the Good Place, we blew that up in the seventh episode of the first season. The entire premise of the show was suddenly gone! Every time that we thought we should maybe extend something, we came back to that as the guiding principle, as the sort of North Star for the way we break stories. And it always led us to determine that it was better to cut something off before it runs out of juice. That always kept us on this pace to end everything after Season 4. 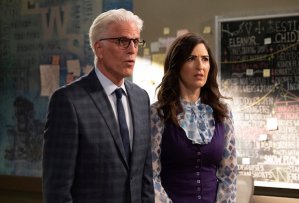 TVLINE | Is there a part of you, though, that wants this to go on for twenty seasons, just because this world is so rich and these characters are so much fun?
There’s a huge part of me that feels that way. [Laughs] It’s hard to really articulate this, but there is an overwhelming sense from the people who work on this show that the whole is greater than the sum of its parts, and the people we’re working with are the best people in the world. Every week I come in, and my job is to think of things for Ted Danson and Kristen Bell to say out loud on television. We are acutely aware, not just as actors, but as human beings, that that is a rare treat. The only feelings of regret I’ve had, none of them are creative. They’re all personal. I have a tremendous amount of personal, emotional regret about the idea that I won’t be doing this anymore, because of the cast, and this writing staff. It’s like a crazy, X-Men, all-star team… and the production team is amazing. It’s the reason shows don’t want to end, you know? When something is working, everyone knows how lucky they are. So it fills me with dread and sadness and regret and misery and shame and embarrassment that I’ve made this decision. But it’s such a specific idea, and it’s such a specific flavor, and it has a very specific set of internal guidelines, in terms of how it runs, and so it’d just be betraying the very nature of the idea to try and drag it out any longer.

TVLINE | So you’ve said the final season will be 14 episodes, not the usual 13, and the series finale will be an hour?
That’s right.

TVLINE | Is that a full hour-long episode, or two half-hours back to back?
We’re conceiving of it as an hour-long episode. It is a full, series-ending, wrap-up kind of a thing. So it will have one gigantic story that will serve as the end of the series for everybody.

TVLINE | Season 3 ended with Chidi making this huge sacrifice and erasing his memory to preserve the experiment. How does that set up what we’ll see in the final season?
Well, obviously, you can’t really think about his decision without thinking about Eleanor. The new dynamic is that she’s pretending to be the leader of this little community, which is a job she doesn’t really like. [Laughs] Eleanor wasn’t a team-leader type of person. And to make matters worse, she has to put a smile on her face as she watches the love of her life not have any idea who she is. Those two things are very much linked, for obvious reasons. And then there are the massive stakes of the experiment itself: If it works, they save humanity, and if it doesn’t work, then maybe all of humanity is doomed. A lot of Season 3 was about personal dynamics. It was about Tahani and her sister, and about Jason and his dad and his best friend, and about Eleanor and Chidi. So we are now, in the final season, telling a lot of the ends of those stories, in addition to the end of the much larger plot story about the universe and how it judges people, and what it means to be a good or bad person. So everything is sort of dovetailing in the final season. 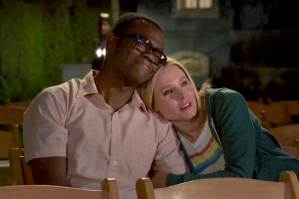 TVLINE | We did see a lot more of Eleanor and Chidi’s love story in Season 3. How central is their relationship to the overall arc of the series?
You know, there aren’t many shows that are good that don’t have love stories in them somewhere. They have to be in there somewhere, because they’re the most universal thing that people think about and care about and want for themselves. That love story is a huge part of the final season, and it’s a huge part of the show in general, but we also have all these other gigantic issues that we’ve deliberately built the show around. So we try to balance it. Season 3 went a little more in that direction because it was the big unexplored thing that we hadn’t really gotten into, and Season 4 will swing away from it a little bit at first, because we have this other gigantic experiment thing going on. But it’ll be in the background, and then at times, it’ll come more to the front, and then it’ll fade back a little bit. It’s always going to be there. It’s just a matter of whether we choose, episode by episode, to focus on it or not.

TVLINE| We’re still waiting to meet the other two newcomers to the afterlife, after John and Simone. Is it safe to say they’ll have a personal connection to Eleanor and Jason?
That’s certainly what Eleanor and Michael and everybody believes. The idea was that the Bad Place chose the people they chose to specifically kind of smart-bomb our original crew. For Tahani, that meant a person she had never met before, but who’d particularly driven her crazy, and who was designed to play to her worst instincts. For Chidi, that meant literally his ex-girlfriend, who he loved at a certain moment in time. So it isn’t necessarily someone’s next-door neighbor or former teacher or whatever, where there’s an actual direct connection. They’re just people whose personalities, profiles and/or life experiences are specifically designed to ruin the lives of one individual, who is part of the original crew. So we really spent a lot of time trying to figure out what that would mean for the final two residents… and you’ll find out in September!