Has Rafael found romance with Sophia Bush? The Chicago P.D. and One Tree Hill vet visits Jane the Virgin this Wednesday (The CW, 9/8c), and TVLine has your exclusive first look at the actress’ debut.

Bush plays Julie, who is… well, character details are still being kept under wraps. But considering Rafael recently told Jane that he went on a date, we can’t help wondering if Bush is playing the new woman who has caught Raf’s eye. Plus, when Bush’s casting was first announced in February, star Justin Baldoni wrote on Instagram, “I can’t tell you who she is playing except that some of you may not be happy about it.” And we’re guessing Jane won’t be happy either. But Julie sure does look delighted in the above photo — as was Bush during her guest spot.

“When one of your favorite ladies [Gina Rodriguez] calls you and says, ‘Will you come play in an episode for my last season!?’ AND that means you also get to play with one of your favorite dudes!? Whelp. You say YES!” Bush captioned an on-set photo on Instagram. “What a dream come true. Beyond thrilled to be making some comedy alongside two of my favorite world-changers.”

Jane the Virgin Series Finale: Behind the Scenes 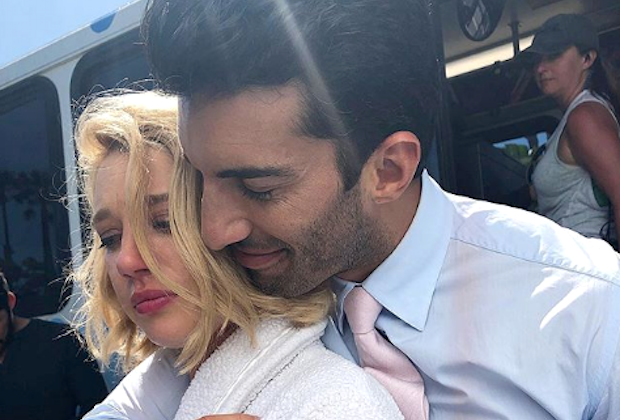 Elsewhere in the episode, “after Rafael witnesses Mateo’s behavior at school, he wants to take a different approach to his treatment,” per the official synopsis. “Rogelio is paranoid that River is plotting her revenge against him. Meanwhile, Jane convinces Petra to go on a single ladies’ night out after she learns that Rafael is dating.”

Check out the exclusive image above, then hit the comments with your theories on Bush’s character!