Though questions still hang over Fear the Walking Dead like those zombie heads that our survivors keep finding dangling above them, Sunday’s episode provided at least a few answers — about the effects of radiation on walkers, about the new character that Galavant’s Karen David is playing and especially about whether Strand and Daniel’s reunion was going to go as badly as we’d anticipated. (Short answer: not really.) The hour also seemed to seal the fate of at least one unfortunate character. Which? Read on… 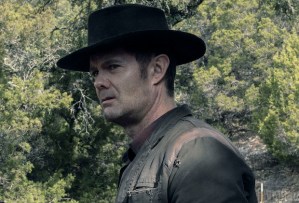 ‘JUST KNOW THAT I TRIED’ | Since apparently there are no Post-Its left in the world, Strand began “The Hurt That Will Happen” videotaping a message to inform his friends that he’d gone in search of “Skidmark,” which turned out not to be a nickname of Daniel’s but the name of his cat. (And not that Daniel was ever Mr. Nice Guy, but who the hell attaches to their furry companion’s collar a bell that’s sure to attract walkers?) After a tense moment during which Strand had to plead with his archenemy not to act on impulse and shoot him on sight, Daniel ushered him into a hangar full of vehicles that he’d “inherited.” From… ? Yeah, no, there would be no small talk and braiding each other’s hair for these two. So Strand got down to business: Al had sent him to find Daniel because their friends — Daniel’s friends, too — needed his plane. Madison? Well, not her. Nick? Uh… no. But hey, Alicia was still alive, said Strand, adding that they had “an ineluctable responsibility to those who remain.” At that, Strand called BS. “Why can’t you be honest?” he asked. You want the plane “for you and no one else.”

Meanwhile, at the crash site, Morgan, John and Alicia discovered no sign of Al or the uniformed walker that had so piqued her interest. What’s more, all of the weapons and ammo that should’ve been in the wreckage were gone. Back at the truck stop, Lucy could feel neither the fingers of one hand (owing to her injury) nor any pain (thanks to the drugs June had her on). “When will I be able to play the accordion?” asked the patient. “You play the accordion?” June replied. “I was thinking of learning,” said Lucy. So yeah, those were good drugs. When John returned, included in his small haul was a notebook of Polar Bear’s and the copy of The Little Prince that had survived so much. Next thing we knew, the lovebirds had taken off to look for Al, the kids, whoever, and Lucy was left behind with a gun that she was sure she could operate one-handed if need be. Still searching about, Morgan and Alicia found their path blocked by more radiation signs and, nearby, an official-looking vehicle whose engine was still warm. 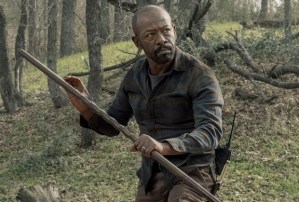 ‘TAKE OFF YOUR CLOTHES’ | Turned out, the vehicle belonged to Grace (Karen David), who’d worked at a pressurized water reactor 13 miles to the north. When its cooling system had failed, it had killed a lot of the employees who’d sought refuge there post-apocalypse. Now Grace, rocking a hazmat suit, was trying to carefully dispatch the radioactive walkers, lest they contaminate anyone else. (They were identifiable by the dosimeter doohickeys they wore and also by the fact that some of ’em looked like extras from The Toxic Avenger.) Of course, she didn’t get to tell any of that to Morgan and Alicia until after he’d sticked a radioactive walker, meaning that she’d have to decontaminate both survivors and — d’oh! — confiscate his stick (since wood is porous and can’t be adequately cleaned). As for the walker blockade Morgan and Alicia found in the season premiere, that hadn’t been Grace. Got all that? Now then, as the trio set off for the crash site so that Grace could see if any of the walkers they’d felled were wearing dosimeters, John and June happened upon a Camp Cackleberry sign and hoped that maybe the kids had gone back there.

While the sweethearts poked around the camp, its only residents appearing to be a cabin full of walkers, Morgan, Alicia and Grace fought zombies at the crash site. Afterwards, Grace yelled at Alicia for risking her life to take down what could’ve potentially been an extra-lethal radioactive walker. Not that she didn’t understand a certain amount of remorseful rage. She’d known the radioactive walkers before they’d been walkers, much less radioactive, and felt responsible for having tried to keep the plant going past the point where their infrastructure could support it. “I couldn’t take care of them then,” she said, sounding already like she’d fit in perfectly with our heroes, “so I have to take care of them now.” Just then, John radioed that he and June might have found a bunch of radioactive walkers: Before turning, it seemed the cabin walkers had burned up a whole mess of ’em and had gotten sick as a result. “This is why no one else can kill them,” said Grace. “Those people were exposed. They thought they were protecting themselves.”

‘YOU CAN’T PUT A WEAPON BETWEEN YOU AND LOSING PEOPLE’ | Back at Daniel and Skidmark’s place, Strand tried and failed to reach any of his pals on the radio, prompting his nemesis to question whether he was really the do-gooder he now claimed to be. “I’m not the same man that I was in Mexico,” Victor insisted. Uh-huh, Daniel replied. “You do have a new haircut.” Eventually, Lucy reached Strand on the radio, and the two of them were able to play “Who’s missing?” etc. before the winds knocked out the long-range antenna outside of the truck stop. While she foolishly attracted walkers by testing her one-handed aim on a few of the undead, Daniel, now aware that Strand was telling the truth, led him to… what? The exit?!? “Our friends need help,” Ofelia’s father agreed. “But not from you.” Strand only hurt people when he tried to help them. “No one knows that better than I do,” Daniel added before firing two shots in the air and warning, “If you come back, the next one will be in your face.”

Back at Camp Cackleberry, Alicia admitted to Morgan that Grace had been right — she had wanted to take down walkers, regardless of the risk. Doing so, she thought, was her only way of contributing. “Every walker I kill, that’s one less dangerous thing out there.” Otherwise, she wasn’t helping anybody, even Al. At that, Morgan heard a kindred spirit: Alicia was, as he’d once been, stuck. But she wasn’t locked in, he insisted. “The way out is opening the door, to people, to possibility, to [the title of the episode].” Once he’d done that, his life started over, and hers would, too. As the episode drew to a close, our heroes volunteered to help Grace find the radioactive walkers. Then, after they’d retrieved Al and the kids, maybe Grace could join them. Sadly, that wouldn’t work. After the accident at the plant, she’d gone back in, and though she’d been careful… well… she didn’t know how much longer she had left and didn’t want to put anyone else at risk. So she’d dispose of the bodies herself before she succumbed.

Back at the truck stop, June awakened an unconscious Lucy, who was surprised to discover that the walkers who’d been coming her way now had their heads hanging from a billboard. The general consensus was that whoever kept making walker-head ornaments was trying to scare them — perhaps, June guessed, because they were getting close to something. But what? So, thoughts? Wasn’t Strand and Daniel’s reunion calmer than you expected, considering the last time they were in the same room, the former shot the latter in the face? Hit the comments.