“Knowing Terry, he just would’ve had such a great time with the nuns,” Gaiman, who wrote and executive-produced the series, tells TVLine. “He would’ve been hanging out with the nuns.”

For the uninitiated: Gaiman and Pratchett penned Good Omens: The Nice and Accurate Prophecies of Agnes Nutter, Witch, which was published in 1990. They’d been working on turning it into a television show when Pratchett died in 2015. The book follows a demon named Crowley and an angel named Aziraphale as they try to thwart Armageddon; the nuns to which Gaiman refers, The Chattering Order of St. Beryl, are a satanic order whose role in the book is to place the infant Antichrist with a human family. (Spoiler alert: They don’t exactly get it right.) 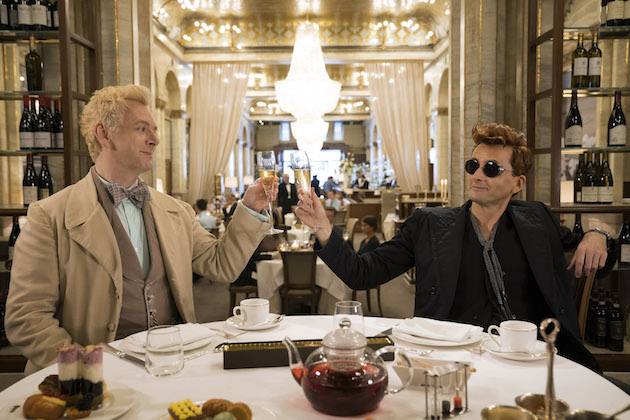 Gaiman says Pratchett would’ve had great fun with a group of actors dressed as the sisters of St. Beryl that Amazon hired to help promote the show. “I know that you wouldn’t have been able to drag Terry away from them,” he says, recalling a publicity event for the series held in Times Square at which the unholy ladies were present. “I missed Terry because I missed the moment that Terry would’ve turned to everybody there, and this thing would’ve been happening in Times Square, and Terry would’ve said, ‘You know, what we actually need to make this perfect is a rubber chicken, which I happen to have!'”

He laughs. “All of a sudden, this thing that was already amazing would’ve just become hilarious and perfect,” Gaiman says, “and he would’ve done that.”