And to illustrate the enduring bond between Good Omens‘ central pair — the angel Aziraphale and the demon Crowley — the show’s own Powers That Be decided to give them a centuries-spanning, nearly half-hour cold open at the start of Episode 3.

The sequence in “Hard Times” is one of the Amazon Prime adaptation’s few diversions from Neil Gaiman and Terry Pratchett’s novel, but “everything that’s in that 28-minute section is actually inferred and implied in the relationships that are in the book,” director Douglas Mackinnon tells TVLine. “But how do you show that? That’s what [the cold open] addresses: that relationship over the journey through time.” 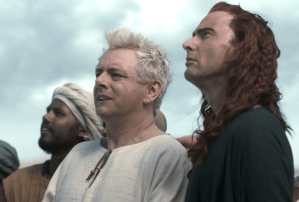 The whole thing begins with Aziraphale getting a dressing-down from God for misplacing his flaming sword, then swiftly moves to Mesopotamia in 3004 BC, where the boys watch Noah load his ark. As the action moves through history, touching on moments of importance both historical (the French Revolution, World War II) and cultural (an early performance of Hamlet), we watch David Tennant’s Crowley and Michael Sheen’s Aziraphale grow to be rather good pals, despite their opposing home teams.

The idea to do something different at the start of the third episode began when showrunner/executive producer/writer Gaiman split the 300-page book into six pieces, an exercise to help him decide what would be in each installment. “When I got to Episode 3, I went, ‘Oh, Crowley and Aziraphale aren’t in this 50-page chunk,'” he says, chuckling. “So I thought, ‘Well, I’ll do a mini-movie of Crowley and Aziraphale through time, and it will give Michael and David something to do.'”

Good Omens: Crowley and Aziraphale's Friendship Through the Episode 3 Opener 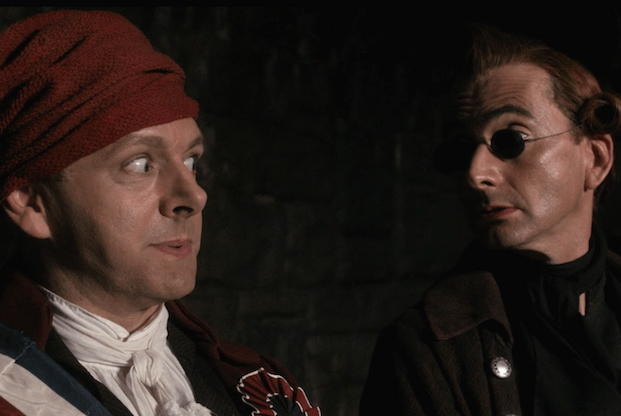 When Sheen first opened his script for the episode, it was “so satisfying to read,” he recalls during a joint interview with Tennant in New York City. “I loved it. First of all, I was going, ‘We get to do this?'”

Tennant nods. “Like, all these different things?” Their excited back-and-forth on the subject is so entertaining, we’ll just let them take it from here.

SHEEN | I remember thinking, “But this isn’t going to be in it, because who’s going to agree to do it?”
TENNANT | Yeah. So expensive to shoot all these different scenes, the massive sets for these tiny scenes.
SHEEN | Because originally, in the French Revolution Scene, that was in a square. The Place de la Concorde or whatever.
TENNANT | Yes, that’s true.
SHEEN | With the guillotine, and thousands of people. [Laughs] That didn’t make it.
TENNANT | That’s true. It didn’t quite survive the first draft. 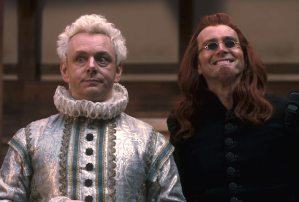 SHEEN | Or, for instance, the scene with Shakespeare at The Globe. That was, again, originally hundreds of people watching the performance of Hamlet. And they’re like, ‘We can’t do it.’ So Neil then went away and thought, ‘OK… so either it’s a rehearsal, or it’s a flop… It opens up a whole new dimension to the scene. So working within restrictions is actually quite useful sometimes. But I think it was the most enjoyable thing for us to film.
TENNANT | Yeah, because those scenes were sort of sprinkled through the schedule, so they were like little treats. Every few days there’d be, “Oh, we’re going to ancient Rome today!”
SHEEN | It was like, there’s a British kids’ TV series called Mr. Benn, where Mr. Benn would turn up in a different period [each time]. He would go into a gentleman’s outfitters, and he’d put on an outfit, then he’d walk through a door and he would be in a different time period.
TENNANT | Yes.
SHEEN | It was like our Mr. Benn. [Laughs] That’s a nice reference for the Americans!

All six episodes of Good Omens currently are streaming on Amazon Prime. Flip through the gallery above — or go to it directly here — to relive Crowley and Aziraphale’s romp through the ages, then hit the comments: What did you think of Episode 3’s extended cold open?