At long last… f—ing closure. Thirteen years after HBO erased Deadwood from the map, the acclaimed Western came galloping back onto the television landscape Friday night with a two-hour movie that aimed to do the near-impossible: bring to a satisfying conclusion a drama that was as well-loved as it was short-lived. And as far as this longtime fan was concerned, it succeeded… somewhat.

Written by series creator David Milch and directed by Daniel Minahan, Deadwood: The Movie picked up in 1889 as the titular town was celebrating South Dakota’s statehood. Along for the ride were nearly all of the show’s MVPs, which sounds swell but proved to be a curse as well as a blessing. On one hand, sure, it was a thrill to see our favorites back in the saddle again. How could it not be? On the other, since this was a movie, not a miniseries, there wasn’t time for all of them to be properly serviced. As a result, Deadwood occasionally felt so overpopulated that it was tougher than it should have been to invest in any single character arc.

That said, Milch and Minahan did manage to give most of their principals a nice moment or two. And, as one would hope, the film’s focus was Al, Seth and Trixie, who were brought back to life so seamlessly by Ian McShane, Timothy Olyphant and Paula Malcomson, you’d have sworn they hadn’t spent a day out of their alter egos’ boots. Robin Weigert also shone in a big way. As the movie began, her scene-stealing Calamity Jane vowed to make things right with her beloved Joanie Stubbs, and by God, by the time it was over, she’d done exactly that.

As for the main plot, it was set in motion by Gerald McRaney’s now-Senator George Hearst. Hellbent on dragging Deadwood into modern times, the Big Bad was eyeing Charlie Utter’s land for development when he was reminded of an old, unsettled score with Trixie and Al involving his attempted murder and its subsequent cover-up. Now, if that sounds like kind of a flimsy conflict off of which to hang a movie… um… it was; the stakes felt… let’s say… minimal. But it did pit Hearst against not only Trixie and Al but lawman Seth, who despite having made peace with his safe, simple life with Martha (Anna Gunn) still carried a torch for Alma (the ageless Molly Parker). But I digress…

After Hearst went from coveting Charlie’s land to murdering him, the villain’s status as the town’s Public Enemy No. 1 was cemented. Yet, when given the opportunity to watch the scoundrel die, Seth instead showed him mercy and merely arrested him. 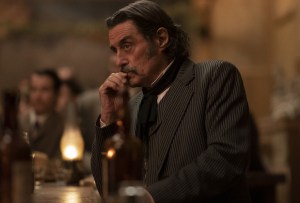 Meanwhile, decades of hard drinking had destroyed Al’s liver, rendering him a shell of his former self, at least physically. He was still Al, mind you, just a mellower, more introspective Al. He was (thankfully!) still spitting out expletives like the only words he knew were four-letter ones. And while he still loved Trixie, he appeared to be happy to see her settle down and start a family with trusty Sol.

Yes, the movie played host to both Trixie and Sol’s wedding and the slightly unbelievable birth of their child. But I’m willing to overlook the unlikeliness of a woman Trixie’s age giving birth because the scenario gave Malcomson some of the film’s liveliest moments. And, as she hinted to TVLine last year, the film felt very much like a love letter to Al and Trixie, right up until the end when, with her by his side, he drew what was presumably his last breath.

Was it everything that a Deadwood fan could want? No, and it couldn’t have been, because we didn’t just want more, we wanted a s— ton more. It was, however, probably what we needed. What do you think? Were you happy with Deadwood’s ending? Was the movie worth the wait? Grade it in the poll below, then hit the comments.