The following Q&A spoils the events of Netflix’s What/If. Haven’t finished yet? Get to streaming!

By the time the 10-hour rollercoaster known as Netflix’s What/If comes to a screeching halt, none of its passengers resemble the people they were when they first got on board. For example, former fledging businesswoman Lisa is finally owning her power, ascending to the ranks of Anne Montgomery, who has faked her own death and is now living abroad — as a brunette!

Meanwhile, Todd and Angela are starting a new life with their family after putting Ian down once and for all, and Marcos and Lionel are committing to spend the rest of their lives together as husbands, having conquered their own trust issues.

Below, series creator Mike Kelley fields some of TVLine’s questions about the ending of Part 1, including what that fourth wall-breaking final shot really meant:

TVLINE | Let’s start with my personal favorite twist: Anne is Lisa’s mother! Did Renee Zellweger and Jane Levy know that when they signed on?
They did. It was a big reason, I think, why Renee signed on. It occurred me that there wasn’t any female version of Darth Vader out there. Like, “Come rule the galaxy with me.” … It was important to me that everyone knew what they were signing up for, and they were all game. The trick on this show was the tone — how to strike it and how to have a lot of fun. 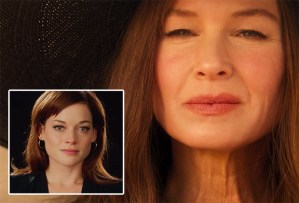 TVLINE | Does Lisa know she’s alive?
What I decided to do with this finale was have each of the characters take a step towards their future and leave the audience to decide what those futures look like. Breaking [the fourth] wall, having Lisa look at Anne and vice versa, is kind of provocative. What it says to me is that in Lisa’s heart of hearts, she believes Anne is still out there. And in Anne’s world, she’s actually won. She wins either way. Either she gets everything, including Lisa, or Lisa becomes a better version of herself, which is also a victory. Whether or not Anne would choose to muddle that up later, I don’t know, but I do know she takes pleasure in where Lisa ended up.

TVLINE | In the end, how important was what happened “that night”?
That’s what was so diabolical and interesting. Anne knew it wasn’t going to be what happened that night that would drive a wedge between Sean and Lisa, creating chaos. It was the clause that said they couldn’t talk about it. This is an examination of trust. As Anne would like to say, trust is the most dangerous thing you can give away. When you cauterize the ability of anyone to have a conversation and share their experience, that’s what f–s everything up. The important thing is to be able to talk through our differences — and secrets are really toxic. So it wasn’t so much what happened as it was not knowing, and not being able to know.

TVLINE | The power of paranoia.
Exactly.

TVLINE | And Angela and Todd — they’re just going to get away with murder?
I tried to make it clear what the story would be, about how that all happened. Basically, like his father, Ian gets caught in a bear trap and the hunter comes along and shoots him for mercy. So people wouldn’t go looking for a murderer. They’d just think, “My God, he was in a bear trap.” 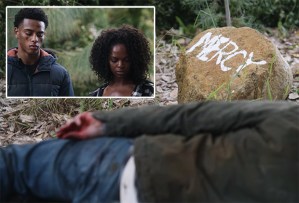 TVLINE | Yeah, I’m not a big hunter. And I definitely won’t become one after this. But I did have a lot of fun watching Dave Annable play such a monster. I’ve only ever seen him play good guys.
He actually is the world’s nicest guy, too. He’s as sweet as they come. And he made a decision to really commit to this crazy thing. That storyline was borrowed from Fatal Attraction, but I thought, “Let’s switch those genders up too, and see what we can come up with.” Everybody makes mistakes — and this one was deadly.

TVLINE | Well, at least Marcos and Lionel got the happy ending they deserved. Kevin really could have driven a wedge between them, but instead he brought them closer. What was the thought process behind this storyline?
While I was contemplating the what/ifs in life, not all of them are regrets. Not all of them lead us down a dark road. Sometimes a risky thing you do can change your world for the better. I also wanted to balance out the insanity. I thought of the Lionel-Marcos-Kevin story as the fulcrum in the center of this crazy balancing act. It was important to me that you had an emotional center for the show that felt real and that made you think about fidelity, about honesty and about trust. And about sex in general, how much power sex has over a lot of relationships.

We’ll have more of Kelley’s thoughts on Part 1 (and beyond?) in the coming days. For now, grade the finale below and drop a comment with your own burning questions.