Summer may not technically start for another month, but Netflix has already given us our first sudsy beach “read” in What/If, a 10-episode social thriller from the mind of Revenge creator Mike Kelley. The twisted series also marks Renee Zellweger‘s major television debut, as she steps into the role of vindictive seductress Anne Montgomery.

“I’ve been thinking about this character for a long time,” Kelley tells TVLine. “She was born out of my slightly unhealthy obsession with all things Mrs. Robinson. That character is so powerful and witty and compelling, but also tragic. The Graduate was my first real movie obsession, and I always thought, ‘What if Mrs. Robinson didn’t soak herself in martinis every night and indulge in self-loathing? What if she put it all into self-enterprise and success and became a person of consequence? As luck would have it, Renee felt the same way about [star] Anne Bancroft and Mrs. Robinson. I actually named the character after Anne Bancroft.”

Anne’s playthings come in the form of Lisa (Suburgatory‘s Jane Levy), the young creator of a fledgling biotech startup, and her husband Sean (Glee‘s Blake Jenner), a professional baseball player-turned-EMT. Unaware of all that Anne has planned for them, the cash-strapped newlyweds receive a tempting proposition in the premiere: The enigmatic venture capitalist offers Lisa $80 million to ensure her company’s success… in exchange for one night alone with Sean. 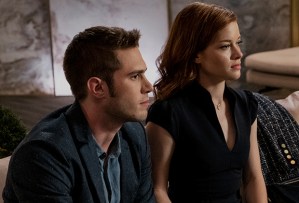 “Renee is a huge fan, as am I, of all those late ’80s/early ’90s social thrillers — Fatal Attraction and Basic Instinct and, of course, Indecent Proposal,” Kelley says. “I really wanted to bring back that tone and have a lot of fun, while also subverting the notion of morality and where we are right now as a people. When it comes to getting what you want in life, either personal, professional or political, where’s the line? Does it even exist anymore?”

And What/If‘s web of madness extends far beyond Lisa and Sean’s personal dealings with Anne. The show also explores issues of secrecy, fidelity and morality through Lisa’s brother Marcos (Tales of the City‘s Juan Castano) and his boyfriend Lionel (Luke Cage‘s John Clarence Stewart), who face difficult truths about themselves by pushing the boundaries of their relationship.

Additionally, we get to see good-guy Dave Annable (Brothers & Sisters) playing wildly against type as Ian, a surgeon with whom Lisa’s friend Angela (Glee‘s Samantha Ware) is cheating on her husband Todd (Famous in Love‘s Keith Powers).

Unlike Revenge, which Kelley left after two seasons because ABC insisted on continuing the show past its “natural” conclusion (“Either you get your revenge or you don’t, right?”), What/If completes Anne’s sordid tale in 10 episodes, all of which are now available to stream on Netflix. “I made sure [this season] has a satisfying ending,” Kelley says. “I’m not interested in dragging out a story past its sell-by date.”

We’ll have more What/If coverage coming in the next few days, but for now, give the first episode a spin. Then come back and weigh in with your thoughts on the Netflix sudser below.