The Ebola virus is one bad bug. And in the late 1980s, when it first appeared on American soil, one United States Army researcher was at the forefront of keeping it from infecting the populace. That researcher was Lt. Col. Nancy Jaax, and The Hot Zone — the National Geographic Channel miniseries based on Richard Preston’s bestseller — is her story.

In a moment, we’ll want to hear what you thought of The Hot Zone‘s two-hour premiere. (Parts 2 and 3 will air Tuesday and Wednesday, respectively, at 9/8c.) But first, a quick recap:

The premiere opens in Kenya in 1980, where a man who is very ill boards a plane, vomits a lot of bloody matter into an airsick bag, and eventually winds up in a hospital where the medical staff wonder to themselves, “Is it the new disease?” It is, and that disease is caused by a pathogen that eventually is classified as a Level 4 biohazard (translation: super deadly). When the action jumps to the end of the decade, we see that the virus — Ebola — is being kept under very close watch at the U.S. Army Medical Research Institute of Infectious Diseases at Ft. Detrick in Maryland. 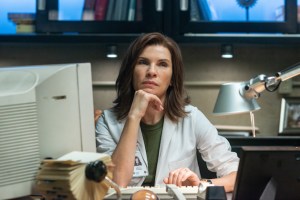 Nancy Jaax (played by The Good Wife‘s Julianna Margulies) works at USAMRIID; her husband, Jerry Jaax (played by The Americans‘ Noah Emmerich) also is an Army veterinarian. They have two children. When their son worries that maybe Nancy might be exposed to AIDS in the course of her work — remember, this is around the time that mainstream America was starting to panic about HIV — she assures him, “I work in one of the safest places in the world.”

When a diseased monkey organ arrives at Nancy’s lab from a nearby private animal-testing facility, she and her co-workers think it’s probably evidence of simian hemorrhagic fever — deadly for animals, but not a threat to humans. But upon closer inspection, Nancy starts to suspect that something more dangerous is afoot. After a sequence explaining the intricacies of how to suit up for a Biosafety Level 4 lab (hint: There are a lot of steps and layers), Nancy notices that the sample she’s looking at isn’t just destroyed: It’s like the cells are “exploded,” she notes to a lab newbie who’s accompanying her. But before she can test to see whether the sample she’s got is Ebola, which kills 90 percent of its victims, she notices that’s she’s bleeding from the hand and has to “crash” exit the facility. Oops. 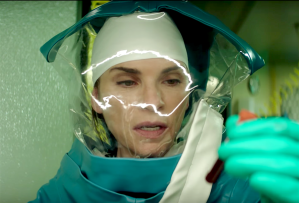 Nancy is put in isolation, where it’s ultimately determined that she’s fine. But her samples were destroyed before anyone could pinpoint what was wrong with them, so she does what any sane person would do… She drives to the private facility late that night and bullies a guard into stealing her some monkey corpses.

There’s a harrowing bit when the frozen dead animals, which are only contained in garbage bags, start melting and leaking out the back of her trunk. But Nancy manages to buy some bleach, perform a thorough cleaning on the side of the road and get back in the vehicle before the local police show up to see what’s going on. Back at USAMRIID, Nancy’s lab privileges have been revoked, but a co-worker named Peter (played by That ’70s Show‘s Topher Grace) agrees to sneak her in. He’s got a vested interest, you see: When he scoffed at her worry over the sample, he and another colleague took a deep sniff of it, and now he’s worried that Ebola is colonizing all over his body.

Eventually, Nancy confirms that the illness they’re looking at is Ebola Zaire. “There’s no cure, no vaccine,” she tells the head of the private lab (played by House‘s Robert Sean Leonard), who reluctantly agrees to let her into his facility to check on another primate that’s exhibiting symptoms of the disease. But Nancy needs backup, so she calls her mentor Wade Carter (played by Game of Thrones‘ Liam Cunningham), who comes out of retirement when he hears that the virus — which has vexed him his entire professional life — has made its first appearance in America. 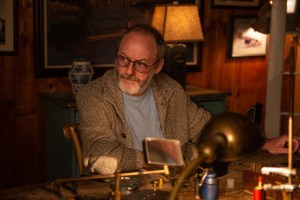 In a flashback, we watch Wade and another doctor traveling to an African mission hospital where they’ve heard reports of a terrible disease that kills with abandon. Wade is skeptical at first, but when he sees the residents of a nearby village have burned their homes (and, in some cases, themselves) to the ground in a desperate attempt to contain the illness, he’s deeply affected.

Back in Maryland, Wade and Nancy euthanize the sick monkey, but Wade is sure that the private facility is hiding something. Afterwards, once Jerry realizes everything that’s been going on, he is very angry that Nancy could’ve put their kids at risk by transporting the monkeys in the family car — not to mention how dangerous it is for her to be working so closely with a virus that’s so horrible. They argue.

Later, Wade shows up at Nancy’s house: He snuck back into the private facility and found another sick animal in a different cell. “We didn’t catch it in time,” he says gravely. “Who knows how far it’s spread?”

And now it’s your turn. What did you think of Night 1 of The Hot Zone? Grade the two-hour premiere via the poll below, then hit the comments with your thoughts!