If you have not yet sat down to binge Lucifer Season 4 on Netflix — or perhaps if you aim to do so again — you may be wondering if there is a way to “supersize” the 10-episode experience by weaving in the two “bonus” episode from last year.

To recap: Production on Lucifer Season 3 included two “bonus” episodes that were to air during the following season. But after cancelling the series, Fox went ahead and aired the two episodes back-to-back, weeks after the Season 3 finale. 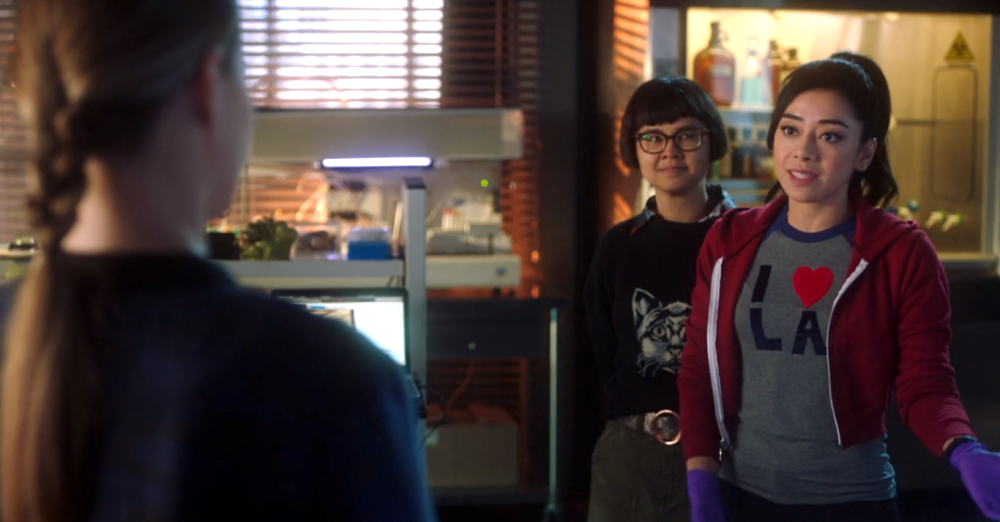 In the first bonus episode, titled “Boo Normal,” Ella was visited by Ray-Ray (House‘s Charlyne Yi), a childhood friend of the “ghost” variety, though we eventually discover that Ray-Ray is in fact Azrael aka the Angel of Death aka Lucifer’s sister, and Ella’s “guardian angel” of sorts. Most notably in that episode — which, remember, was to air at some point after Chloe saw Lucifer’s devil face — Ella confided in Decker that she sees ghosts. Chloe responded, “I have seen a lot crazier things. Like, a lot.” And producers confirmed to me at the time that Chloe was definitely alluding to the events of the Season 3 finale.

The second bonus episode, “Once Upon a Time,” imagined a reality in which God (voiced by Neil Gaiman) didn’t put Chloe in Lucifer’s path, so it was very much standalone in nature. (Read recaps of both “bonus” episodes here.)

So as you sit down to binge Season 4, where best to insert these two episodes (which have always been available on Netflix, tacked onto the end of Season 3)?

The sad news is… you can’t, really.

“We did talk for a long time about incorporating them [in Season 4], and we just decided that it would almost be a disservice to both the longer story and to the episodes themselves,” co-showrunner Ildy Modrovich tells TVLine.

Instead, the “bonus” episodes should be consumed before your Season 4 binge, thusly:

“‘Once Upon a Time’ fits nicely exactly where it is, as almost like a calm before the storm, a nice little digression,” says co-showrunner Joe Henderson. As for “Boo Normal,” which hinted at Chloe post-devil face reveal, “That fits really well in Season 3, ignoring the fact that Chloe [says what she says], because Chloe hints about knowing more, but doesn’t really say it.”

Specifically, Henderson says to slot “Boo Normal” in front of Episode 3×16, “right before we bring Abel (Crashing‘s Lauren Lapkus) back to life. I think it fits really nicely in there as, like, as a fun exploration-of-Ella episode.”

Meaning, “Boo Normal” is part of the show’s canon, in that Azrael did visit and Ella did confide in Chloe. As Aimee Garcia noted during TVLine’s set visit, “Chloe’s the only one who knows that Ella sees ghosts, who ends up obviously being Lucifer’s little sister, and that really brings Chloe and Ella together. So, when Chloe has Lucifer issues, she goes straight to Ella, which is really sweet, because you know, Ella just wants love, and Ella wants to see them happy. That’s why her first initial reaction when she sees Eve is like, ‘Team Deckerstar, bitch!'”