Not even five minutes into the premiere of National Geographic Channel’s miniseries The Hot Zone, it’s startlingly clear that going viral isn’t always a good thing.

An ailing character sweats profusely. He stumbles. He desperately boards a plane in hopes of getting help in time. And then we watch in horror as his insides seem to liquefy in real-time. The sequence is harrowing and horrifying, particularly because — as we soon learn — it illustrates a 1980 outbreak of the Ebola virus in Kenya.

The thriller, which then skips ahead to chronicle the 1989 resurgence of the pathogen in Reston, Va., is based on Richard Preston’s bestselling nonfiction book. It stars The Good Wife‘s Julianna Margulies as Lt. Col. Nancy Jaax, a scientist at the Army’s Medical Research Institute of Infectious Diseases, who found herself on the front lines of the medical crisis when an infected monkey organ showed up at her pathology lab. (Watch a sneak peek.)

The miniseries will air on three consecutive nights, starting Monday at 9/8c. Ahead of the premiere, we’ve upped your security clearance to give you access to some highly classified intel. Read on for what you need to know about The Hot Zone. 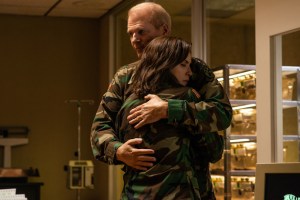 THE VILLAIN | Ebola “gets into the person’s cells and takes over the cell and transforms the cell into more particles of Ebola,” Preston said after a recent screening of the miniseries’ premiere in New York. Translation: As it progresses, the virus uses more of you to make more of itself. “In a way, it’s the antagonist of the human species, but it’s a dark and voiceless antagonist,” the author added.

THE HEROINE | When Nancy Jaax wasn’t racing to contain a highly virulent episode mere miles from the nation’s capital, Margulies noted, she was fighting for her concerns to be heard at the male-dominated nexus of science and the United States Army. “I wouldn’t have been as calm and steady as her,” Margulies said with a laugh. “I wanted to show that determination, rather than the angry hysteria that would be bubbling under my skin if I was top of my field and someone was saying, ‘No.'” 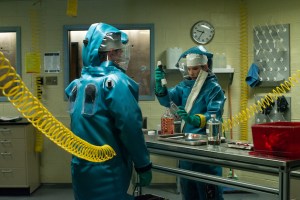 THE UNIFORM | Margulies and various other cast members spend a great deal of screentime in Biosafety Level 4 suits — aka the bulky type of protection you need when dealing with a disease like Ebola — which Margulies described as isolating and physically limiting. “I cried three times, but not when I was supposed to!” she said, laughing.

THE TAKEAWAY | Emmerich pointed out that the spread of diseases like Ebola illustrates the folly of ignoring our evermore interconnected world. “We want to build walls, we want to separate and divide. That’s an impossibility as a species at this point in our evolution,” he said. “What happens anywhere can affect anyone anywhere else. So our survival depends upon each other.”