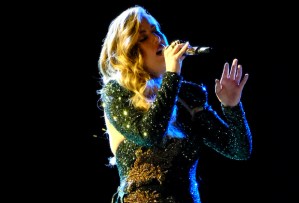 My heart was with Team Legend’s Maelyn. Since as far back as the Blind Auditions, she’d given one beautiful performance after another (after another after another). And her rendition of “Hallelujah” Monday had actually made me cry — and I never cry when recapping. Well, unless the Internet cuts out right as I’m trying to post the story!

That said, Team Blake’s Dexter performed exceptionally well Monday, had arguably the best of the original singles and came to the show with a built-in following leftover from his stint on American Idol. What’s more, the country vote seems to be huge. Maybe even huge enough to score him the win despite viewers throwing some of their votes to his teammates?

That remained to be seen as we sat down to find out the results. If TVLine’s poll Monday was any indication, nah, the country vote wouldn’t be big enough to steal victory away from Maelyn. (Last I checked, she had nearly triple the number of votes as Dexter; Team Blake’s Gyth Rigdon and Andrew Sevener didn’t even have 10 percent of the votes if we added their tallies together!)

Before we found out who won Season 16, of course, we had a whole rollicking show to get through. After a cute, silly introduction in which the coaches’ dogs hung out (and were voiced by the all-stars themselves) The Secret Life of Pets 2 style, it went a little something like this… 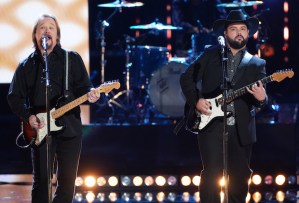 Andrew Sevener (Team Blake) and Travis Tritt, “T-R-O-U-B-L-E” — Andrew’s grade: C | I’ll admit Andrew might have been better on his duet with his idol than I realized. But I just couldn’t tell, because both his and Travis’ vocals were set too far back in the mix; the raucous guitars kinda drowned them out. Hope Andrew had fun, anyway, this being his dream matchup and all.

The Jonas Brothers, “Cool” | The JBs’ new single was as summery as suntan lotion — and damn, Nick reached those high notes so easily, it was like he was grabbing them off a low shelf — but I couldn’t say that I liked this as much as his solo material or Joe’s DNCE stuff. Guess I just prefer my cake by the ocean. Or cake, period?

Khalid, “Talk” | What I found most interesting about this performance by Team Legend’s Battles mentor was just watching him be swag in sorta slow motion. The song, I didn’t think I’d remember five minutes after it was over. And yes, I’m fully aware that I now sound like your grandpa, and I don’t like it any more than you do.

Mari and Kim Cherry, “Good as Hell” | Aw, this was the part of the show where they started teasing us with reminders of the diverse talent pool that got left behind by this cockamamie season. Mari and Kim’s Lizzo cover was nothing to write home about, but it led into… 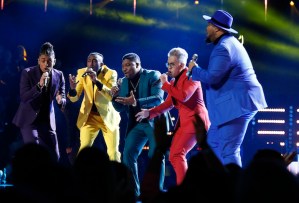 Domenic Haynes, Shawn Sounds, LB Crew, Kalvin Jarvis and Jej Vinson, “My Prerogative” | Actually, this wasn’t good, either. It felt… flat. So mostly, all it did was re-annoy me that Shawn hadn’t made it to the Finals. The rest of ’em, eh, in the end, I could take ’em or leave ’em.

OneRepublic, “Rescue Me” | Here in Voice recapland, you and I often gripe about mumbly singers, right? So you had to be impressed, didn’t you, by Ryan Tedder’s rapid-fire enunciation at the start of his new single? He lost it as the number built, but at least at first I understood every word. Cool song, too — my favorite thus far. (Though I’m probably partial to alt-pop… )

Hootie & the Blowfish, “Let Her Cry” | At this point, I’ve ceased to be embarrassed by how much I learn watching Voice finales. A coupla seasons ago, one introduced me to Janelle Monae’s “Make Me Feel,” which I played on a loop for an entire summer. I found out I was a Charlie Puth fan watching a Voice finale, too. And this season’s revelation: Hootie’s still around and still sounding good. #themoreyouknow 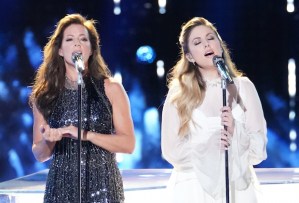 Maelyn Jarmon (Team Legend) and Sarah McLachlan, “Angel” — Maelyn’s grade: A | Whoa — now this was a match made in pop heaven. Sarah sounded just preposterously divine, and her voice blended beautifully with Maelyn’s. If I had any quibble with their duet, it would only be that Maelyn didn’t get enough solo bits to suit me.

BTS, “Boy With Luv” | Crap, I felt another grandpa moment coming on when the K-pop supergroup hit the stage. Like, was this good? Isn’t it just modern bubblegum — KC and the Sunshine Band, only mostly in Korean? Loved the choreography, at least. Hadn’t seen footwork that fancy since Kennedy Holmes was robbed of the title in Season 15’s finale. 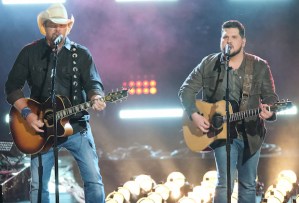 Dexter Roberts (Team Blake) and Toby Keith, “That’s Country, Bro” — Dexter’s grade: A | It’s probably country-music sacrilege to admit it, but I liked Dexter better on Toby’s hit than I did Toby himself. Dexter seemed to more sing the song, whereas Toby a lot of the time kinda talk-sang it. Plus, Dexter’s a lotta fun now that he’s come out of his shell on stage. He was serving personality the likes of which we haven’t seen since Shawn Sounds was eliminated.

Halsey, “Nightmare” | After her performance in the Season 15 finale, I was really looking forward to seeing Halsey on stage again. She doesn’t just sing, she puts on a freakin’ show. This was a full-on production number — a crowd of gyrating dancers bouncing off of one another while Halsey rocked out like Billie Eilish on steroids. Adding this to my must-download list… 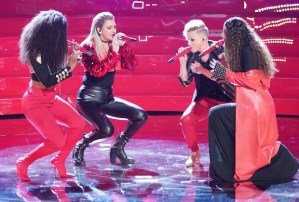 Presley Tennant, Lisa Ramey, Betsy Ade and Celia Babini, “The Edge of Seventeen” | Dang. I really wanted to love the numbers that brought back contestants we liked and lost, but they kept being duds. Here, the foursome’s voices just didn’t gel, so the most entertaining thing about their performance was the variety of red and black outfits that the wardrobe department put together for them.

Gyth Rigdon (Team Blake) and Hootie and the Blowfish, “Hold My Hand” — Gyth’s grade: B- | When Carson Daly announced this match-up, I thought, “That’s just mean — why do they keep having Gyth sing with guys who have bigger, richer voices than he does?” But I’ll be damned, he held his own. Maybe in part it was just knowing that the competition was over. He looked and sounded loose, relaxed, like he was just kicking back and having fun. His voice still pales in comparison overall to Dexter and Andrew’s, but Gyth’s enthusiasm was contagious.

Taylor Swift feat. Brendon Urie, “Me” | I thought La Swift was sounding pretty great until Brendan joined her on stage, then it was like oo, what’s this! His voice tore through the wall of sound like a wrecking ball. And he’s just such a showman, jeez. I’ve seen fidget spinners that don’t move as smoothly as he does. Fun way to round out the night’s performances.

When at last we got to the results, it was…

Second Place
Gyth Rigdon (Team Blake) — whew! I was scared there for a whole commercial break!

So, your reaction to the results? Your thoughts on the season? Vote in the polls below, then hit the comments.