Apparently Game of Thrones‘ editors could have used another cup of coffee.

Just two weeks after #CoffeeCupGate, eagle-eyed viewers of Sunday’s series finale spotted yet another anachronism — this time in the form of a water bottle. The plastic container can be seen at the 46:19 mark, as Grey Worm brings Tyrion in front of a council of Westeros’ surviving rulers.

The latest gaffe is arguably less conspicuous than the modern coffee cup that was left on the Winterfell banquet table in a scene from Episode 4. After that mistake went viral, HBO put out a statement, which read, “In response to inquiries from those who saw a craft services coffee cup in Sunday night’s episode of Game of Thrones, HBO states, ‘The latte that appeared in the episode was a mistake. Daenerys had ordered an herbal tea.'” (The cup was later expunged from the version of the episode that appears on HBO Go.) 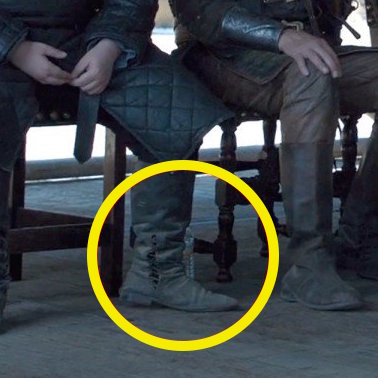 Game of Thrones ended its eight-season run this weekend with what is already one of TV’s most controversial finales ever. TVLine readers gave the series ender an average grade of “C,” and the final season an overall grade of “C-.” (Read Kim Roots’ last-ever Thrones recap here.)

Did you notice the bottled water upon first viewing of the GoT finale?