REST IN PEACE, DAENERYS STORMBORN OF HOUSE TARGARYEN, HEIR TO THE IRON THRONE, QUEEN OF THE ANDALS AND THE FIRST MEN, PROTECTOR OF THE SEVEN KINGDOMS, MOTHER OF DRAGONS, KHALEESI OF THE GREAT GRASS SEA, THE UNBURNT, BREAKER OF CHAINS

HIGH POINTS | Surviving Khal Drogo’s funeral pyre, which also brought about the birth of her dragons; buying the Unsullied and then freeing them (and having Drogon barbecue the highly annoying Kraznys); freeing the slaves of Yunkai; liberating the slaves of Meereen; bedding Daario Naharis; riding Drogon to safety after the Sons of the Harpy attack; emerging, unscathed, from the fire that killed Moro and his 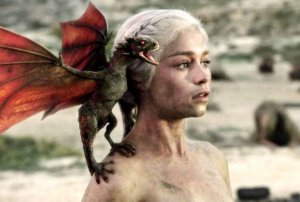 men; slaughtering the slave masters and the Sons of the Harpy; returning to Dragonstone as an adult; coming out on top in the Loot Train Battle; welcoming Jorah back after his greyscale was healed; saving Jon and his men after the Night King’s army attacks beyond The Wall; hearing Jon pledge his loyalty to her; making a highly dramatic entrance at the Dragonpit meeting; starting a romantic relationship with Jon

LOW POINTS | Marrying Khal Drogo against her will, eating a raw horse heart whole, nearly getting poisoned by Robert Baratheon’s operatives, giving birth to a stillborn son, having to kill a vegetative Khal Drogo, rebuffing Jorah’s declaration of love for her, exiling Jorah after learning he’d been spying on her; chaining up Rhaegal and Viserion; getting captured by Dothraki; losing Viserion to the Night King’s spear; learning her lover Jon was actually her nephew, Aegon; holding Jorah as he died during the Battle of Winterfell; watching Rhaegal get fatally shot by Euron Greyjoy; watching Missandei be beheaded; learning Varys betrayed her; ordering Varys’ death; destroying King’s Landing after the Lannister army surrendered the city; becoming a full-on tyrant in her final days

CAUSE OF DEATH | Stabbing at the hand of her lover/nephew, Jon Snow/Aegon Targaryen

EPITAPH | We were going to write something about power changing people, but you know what? If Daenerys were a man, there’d be a lot fewer think pieces about her hunger for domination. So we’ll just say rest easy, khaleesi: You didn’t always make the right decisions, and your timing could’ve been better, but you meant well… for a while there, at least.

Now it’s your turn. Hit the comments with your favorite Daenerys moments over the years, and then tell us which Game of Thrones character you fear/hope will fall next!