It would not be an exaggeration to say The Blacklist introduced the mother of all twists in its Season 6 finale.

After months of lingering suspicion that Liz’s mom, Katarina Rostova, might still be alive, the NBC drama served up a concrete answer to that question on Friday: Katarina is alive, and you don’t want to cross her.

At the end of the hour, Red learned of Katarina’s whereabouts with the help of an unnamed stranger who seems to know Red, Katarina, Dominic and Liz quite intimately — even though this stranger was never identified during the episode. (My theory? He’s the real Ilya Koslov. But we’ll have to wait for Season 7 to get answers on that.) Upon learning that Katarina has been lying low in Paris, Red traveled there immediately, and he stopped her as she walked down a quiet street at night.

Red knew that meeting with Katarina wasn’t safe, and he told her as much, but they greeted each other with a passionate kiss anyway — that is, until Katarina stabbed Red with a syringe (!), rendering him unconscious within moments. A car then pulled up next to Katarina, some men got out and pulled Red’s limp body into the vehicle, and they drove off.

Elsewhere in the hour, the task force finally foiled Anna McMahon’s plan, which was to have President Diaz’s wife assassinated, seeing as the First Lady was about to go public with some damning evidence about POTUS. During a vacation weekend at his lake house a few years back, President Diaz got very drunk and accidentally killed two people. His wife had wanted him to come clean about the incident during the next presidential debate, but he intended to have her killed at the event instead. In the end, the plan was intercepted: President Diaz resigned (and will be formally investigated by the FBI in the months ahead), his wife survived, and Anna McMahon was killed at the hands of Dembe, who returned to Red’s life (yay!) at the best possible time.

Liz, meanwhile, finally welcomed daughter Agnes home — blissfully unaware, of course, of the ill-fated reunion that Red was about to have with her own mother.

Below, executive producers Jon Bokenkamp and John Eisendrath break down the finale’s Katarina cliffhanger (and what it means for Season 7), as well as those unresolved questions about who Red truly is.

TVLINE | How long had you been planning to bring Katarina back into the mix as a present-day character? Was this something you had in mind all season long, or perhaps earlier?
JON BOKENKAMP | If you look back at the season, it’s probably more obvious where we were going. It’s been something we’ve been platforming all season. There’s more questions about Katarina Rostova, and hopefully we answered [some of them] in a satisfying way in Episode 19, where we really told a full hour about who this woman was and why what we’ve been led to believe — that she had killed herself — was not true. We saw that she walked out of the water, and we’d been setting up the idea that she’s out there. The specter of Katarina snapping into focus is a satisfying ending to the season, I hope, because it’s the introduction of the present-day version of Katarina Rostova. Laila Robins [who plays Katarina] is a great embodiment of both the danger and the specter and the formidability. She embodies that enigma, and looking ahead, that’s going to be a big part of what we want to talk about in Season 7. 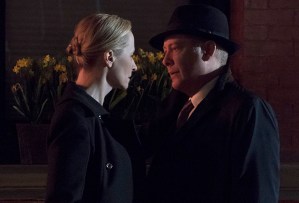 TVLINE | One of the leading theories that I’ve seen from readers — which perhaps you’ve seen from fans, as well — is the suspicion that Red’s real identity is Katarina Rostova, and he’s been Liz’s mother this whole time. How much awareness have you guys had about that theory this season, or in seasons past? Did you want to drop some clues that the theory might be true, before revealing that Katarina is really alive?
BOKENKAMP | I love reading all of the fan stuff, the theories and what’s on Twitter. I take great joy in knowing the answer and seeing all the theories that are out there. In the writers’ room, our script coordinator, Sam — for a long time — has put up The Strangest Thing You Can Find About The Blacklist [on the board] every day, just the theories that are out there. That’s one of the things that’s so fun about the show. Whatever your theory or whatever your camp is, you can probably turn the story a few degrees and make your theory make sense. So yes, that is one that we have heard, and I know it’s out there. There are a lot of them, far more unusual than that. [Laughs]
JOHN EISENDRATH | I would say, as someone who does not look very much at what people say online about the show — your question was if we’re telling the story in response in any way to what the theories are, and I honestly think the answer is no. We had an idea of what the story was from the beginning, and we haven’t really veered from it at all. That’s part of why, every year, we’ve been able to give genuine, legitimate answers that the audience has been able to enjoy. Not kind of vague suggestions — real, concrete footholds for the audience that has allowed them to feel like we’re not stalling, we’re not giving them lies or half-truths. That’s part of what’s engaged them in the question of his real identity.
BOKENKAMP | The storytelling is never reactive to what we see online. The theories never really drive anything.

TVLINE | Let’s talk about the scene where Red is speaking with that unnamed stranger on the bench. They’re both dropping hints that perhaps the story Dominic told Liz, about who Red really is, was not a fully accurate story. Is it safe to say Red’s identity has not been revealed, and there’s more answers to come in Season 7?
EISENDRATH | It is true in that scene that the stranger says, “Why would Dom have chosen to tell that story?” That is an example of our signaling that there are people who wonder whether it was [a true story]. People can interpret it as either, “Was it the right time to tell the true story?” or “Was he choosing to tell a story that was, in fact, not true?” Your asking that question is very satisfying to me, because it makes me feel like the scene fulfilled its purpose, which was to do just that: to make people wonder whether he told the truth or whether, in fact, he did not.

TVLINE | I couldn’t help but notice that when Katarina first saw Red in Paris, she called him “Raymond.” She didn’t call him “Ilya” or any other name. Perhaps I’m getting into conspiracy theorist territory, but should we take that as any kind of clue regarding Red’s real identity?
BOKENKAMP | I don’t think so. I don’t think that’s teeing up anything.
EISENDRATH | What [James] Spader always says — which Jon and I agree with — is that whoever Red really is, he is Raymond Reddington now. Whatever identity he has had in the past, he is Raymond Reddington, and anybody who even knew him then would know that that’s his real identity [now].

TVLINE | Heading into Season 7, I have to ask: Has there been any discussion about the show’s endgame? Do you have an idea of how long you’d like to continue telling this story?
BOKENKAMP | We talk about it, yeah. We talk about it. Especially in a serialized show like this, where there is a mythology, we never want to stretch it. We never want to take advantage of that. And yet, at the same time, I think we really have a lot of story to tell. Going into Season 7, John and I both feel very confident that we have a lot of work yet to do. I don’t think anybody’s racing to the finish line.

That’s a wrap on Season 6, Blacklist fans! How did you feel about the finale? Cast your votes in our polls below, then drop a comment with your full reviews.