The following post contains major spoilers for Friday’s episodes of The Blacklist.

After 130 episodes, dozens of creepy criminals and a whole lotta fandom-wide conspiracy theories, viewers of The Blacklist finally know who Raymond Reddington really is.

Of course, when the credits initially rolled on The Blacklist‘s pilot back in 2013, many of us assumed that Raymond Reddington was merely a fugitive, turning himself in after years on the FBI’s Most Wanted list. But as the NBC drama continued, it became clear that Red isn’t really Red, and the man that James Spader has been portraying since Season 1 is merely an impostor.

Fortunately, series creator Jon Bokenkamp made good on his promise to deliver answers in Friday’s two-parter, which at last revealed Red’s true identity. Let’s unpack the big developments from “The Brockton College Killer” and “Rassvet”:

LIZ’S SECRET REVEALED | In the 8 pm hour, after significant urging from Dembe, Liz finally comes clean to Red that she turned him over to the police earlier this season. (And in one of my favorite Spader moments of the series, an incredible mixture of anger and confusion unfolds across Red’s face upon hearing the news.) Liz confirms that she only did it because she wanted to learn the truth about who Red really is, but after seeing how close he came to death, “I don’t care about who you were, I care for who you are.” Red, however, is unsure if he can ever believe Liz again — and he’s barely able to look Dembe in the eye after learning he kept Liz’s secret for weeks.

In the wake of Liz’s bombshell, Red pays a visit to her grandfather, Dominic Wilkinson, in search of advice on how to proceed with Liz and Dembe. After all, Dominic suffered his own betrayal at the hands of Katarina Rostova, prompting him to lead a solitary life for decades. He tells Red that he’s at peace with the decision he made, because he did it for love. The question is: How much does Red love Dembe?

Later that day, Red returns home to find Dembe with packed luggage, and he makes a valiant effort to clear the air between them. “I went away to think about you and me, and all I could think was that I missed you,” Red tells his friend and confidant. “But I realized you don’t need my forgiveness, ever. Because when it comes to this, you can do no wrong.” (We’ll now pause for a brief intermission while I sniffle into some tissues.)

Though Dembe is grateful for Red’s emotional monologue, it isn’t enough to sway him from using a recently purchased plane ticket. “I appreciate that, Raymond — but I can’t forgive you,” Dembe reveals, prompting Red to reply that he doesn’t understand. “No,” Dembe replies. “I suppose you don’t… I’ve followed your path long enough. It’s time I follow my own.” And with that, Dembe leaves — at least for the time being. 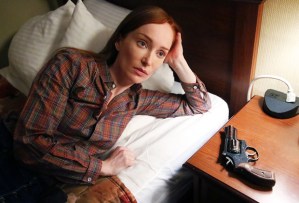 RED’S SECRET REVEALED | In Friday’s second hour, Liz pays her own visit to Dominic, after Ressler’s side investigation reveals that Dom is actually Liz’s grandfather. She begs him to offer a little insight into Red’s true identity and what really happened to her mother — and Dominic is surprisingly forthcoming with the information Liz seeks.

The episode consists mostly of flashbacks, bringing us back to the moment when Katarina Rostova narrowly avoided drowning in the ocean. From that moment on, Katarina has been presumed dead by suicide, and we learn that she went to great lengths to keep her survival a secret. Case in point: She enlists Ilya Koslov (Revenge‘s Gabriel Mann), an associate and occasional lover, to help her craft a new identity and elude the KGB officers who are trying to find her. But even Katarina and Ilya’s most elaborate ideas tend to have the same outcome; they will always be hunted by the KGB and the Americans, and there doesn’t seem to be a way to leave that life behind — that is, until Ilya concocts a game-changing plan that Katarina (rightfully) calls “absurd.”

After learning that Raymond Reddington — the real Red — had $40 million tucked away in secret bank accounts before his death, Ilya suggests that he and Katarina get their hands on that money and use it to get as far away as possible. Katarina protests, insisting that all of those banks have strict security, and they would only hand over the money if Reddington himself showed up at the banks to claim it. Ilya, however, is undeterred: In fact, he’s willing to become Raymond Reddington in order to get the job done, especially since no one seems to know that the real Red is actually deceased.

Upon hearing this story from Dominic, Liz quickly figures out how Ilya pulled off the whole scheme. He enlisted Dr. Hans Koehler, the face-altering surgeon from earlier this season, to change his appearance, and he gathered all of Red’s most private secrets from Katarina, who’d spent months getting close to him in her role as a KGB officer. (And though it’s easy to be skeptical of this big reveal, we do actually see Ilya going under the knife to become Reddington, followed by scenes of Ilya-as-Red withdrawing his money from those banks. He even changes his voice to a James Spader-esque timbre, so this all seems legit, at least.)

Ilya understands that by becoming Red, he’ll have to spend the rest of his life on the run — but he’s OK with that, if it means protecting Katarina. “Promise me something,” Katarina says. “If they get to me, if they take me? Take care of Masha.” Ilya agrees without hesitation: “Like she was my own.”

We then return to the present day, where Liz pays Red-but-actually-Ilya a visit in Hong Kong, revealing that she knows his true identity. She’s grateful that he took such a big risk to protect her mother, though she remains puzzled as to why Ilya kept Red’s identity all these years, even after he got that $40 million out of the banks. “I am what I am,” a cryptic Red responds, looking unhappy that Liz knows his secret. “Popeye the Sailor Man.”

Later, Dominic returns home to find Red waiting for him, still looking rather peeved — but Dominic doesn’t regret telling Liz the truth, or at least the version of it that she heard that day. “You were the architect of this charade that cost me my daughter and, until now, my granddaughter and great-granddaughter,” Dominic maintains. “She was going to find out sooner or later. What you need to do is thank me for putting all of this behind you.”

But Red is unmoved by Dominic’s words. “Is that what you think you did? Because I think you may have made things worse,” he counters. “So, from the start — what did you tell her? Word for word.” And with that, the credits roll.

OK, your turn. What did you think of Friday’s two-part Blacklist? Grade it in our poll below, then drop a comment with your reactions!