Superstore creator Justin Spitzer previously told TVLine that Season 4’s cliffhanger would be “the biggest one we’ve ever had” — and he wasn’t kidding.

In the second half of Thursday’s double-header, corporate authorized an ICE raid to stymie the establishment of a workers’ union at Store 1217. Jeff phoned Amy and urged her to get Mateo out of Cloud 9, but the staff’s best efforts proved futile. As the finale drew to a close, a handcuffed Mateo was in custody of Homeland Security. Meanwhile, a shellshocked Amy turned to Jonah and asked him if he wanted to start a union — for real this time.

Below, Spitzer — who is stepping aside as showrunner for the upcoming Season 5 — weighs in on Mateo’s predicament, Amy’s decision to turn her back on corporate, and the likelihood of a Sandra/Jerry wedding.

TVLINE | Mateo’s undocumented status was first revealed back in Season 2’s “Olympics,” months before Donald Trump was elected president and illegal immigration became a hot-button issue. Did the current administration’s policies influence the decision to really lean into this storyline and take it as far as you did?
I think it’d be difficult to say that we weren’t at all influenced by the current administration. There’s even a line in the finale [where] Dina says that it’s ironic that [ICE’s] whole job is just an exercise in walls being useless. So I would say unavoidably yes, but we didn’t consciously go into it to make a statement about the current administration.

TVLINE | Was there any point where you thought to yourself that this cliffhanger might be too dark?
There was a lot of debate about whether we should do it at all. We originally talked about doing it mid-season, so that people knew it would be addressed in some way in the next episode, and there wouldn’t be this sense of dread about how the show is going to address it in a few months’ time. And then by the end of the season, America [Ferrera, who is also an executive producer] strongly endorsed it. I was excited… it felt good to have her say, “Yes, I believe in this. This is an important story and a story our show can tell in this specific way.”

TVLINE | Do we know where Mateo is being taken at the end of the episode?
A lot of people will perceive it as Mateo being taken away in a van, driven to the airport and flown directly to the Philippines, and that’s not really the case. There’s detainment, there are proceedings… Nico Santos is not leaving Superstore, so I think people can at least rest assured about that. 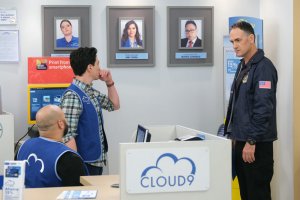 TVLINE | You call back to Mateo’s self-promotion to floor manager when the ICE agent spots his framed photo on the wall. Did you always know that photo would come back to haunt him?
No, no we didn’t. I’ll mention something that some more astute people on Twitter will figure out: After we had done that episode where he put up the photo, set dressing had replaced it with a different photo of Mateo. Then we got to this point and I wanted to use [the original].

TVLINE | Amy turned against corporate, then lied to an ICE agent about Mateo’s employment. Does she still have a future in management?
I don’t know how exactly it’ll pan out — if she’ll keep the job, if she’ll be replaced, if it’ll just be in limbo for awhile —  but I think that’s going to affect things. I think that’s safe to say.

TVLINE | How will this latest effort to unionize differ from the workers’ initial attempts in Season 2?
In Season 2, when they were on strike, we knew that the purpose of that episode was the whole thing sort of collapses very quickly. And we said at the time, if we’re still on the air for Season 4, that’s when we’ll revisit this and try to do it for real. Speaking as a previous writer but not going forward into next season, I think that this will grow into a more significant push. I think there’s a lot more to do with that arc, and we’re at a place in the series now where it’s time to make some bigger changes.

TVLINE | Amid all the chaos, Sandra and Jerry got engaged! Will Carol do everything in her power to make sure that wedding never happens?
[Laughs] I don’t know how she can stand in the way, though she did manage to convince Sandra to give up Jerry based on a coin flip. If that can happen, anything can happen.

What did you think of the Superstore finale? And what about Season 4 overall? Weigh in via the following polls, then drop a comment to flesh out your thoughts.