Warning: You don’t have to be a genius to know that the following contains spoilers for Thursday’s series finale of The Big Bang Theory. If you haven’t watched yet, use your head.

We know it all started with a big bang. But how did The Big Bang Theory not only end but end its celebrated 12-season run in such a way that TVLine boss Michael Ausiello was moved to call the series finale “immensely satisfying, consistently hilarious and, at times, refreshingly dark”? Read on and find out! 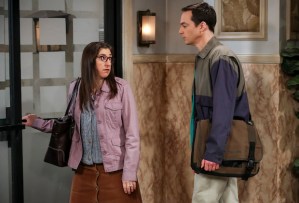 ‘OUR NAMES WILL BE LINKED TOGETHER FOREVER’ | The first episode of the two-parter, “The Change Constant,” began with Sheldon and Amy awaiting the phone call that would inform them whether they’d won the Nobel Prize for physics for their paper on super-asymmetry. When the wait dragged on (and on) and Sheldon nodded off, Leonard and Penny fought over which of them would get to slap him to wake him up — he’d given permission, after all. Before Leonard could do the deed — he had earned it after so many years as Sheldon’s roommate! — Kripke called pretending he was Sweden. Smart as Sheldon was, he was fooled by his nemesis’ accent! Then, at last, the call came, and hurrah! The couple did win! Only Sheldon’s response was so unenthusiastic — “What if I’m dreaming?” — that at that point Leonard went ahead and slapped him!

Turned out, Sheldon wasn’t as comfortable with scientific-superstar status as he’d always imagined he’d be. As the congratulatory texts came in from his entire family (including his brother’s ex-wives), and the press started hounding him and Amy, he chafed at the sudden attention. He even ran from reporters outside their apartment building. At work, the dean prepped Raj, Howard and Leonard to refer to Sheldon and Amy merely as “quirky” when asked by the press. Shortly thereafter, Howard happened upon a reporter looking for Sheldon for their scheduled interview and presented himself as a viable alternative — the brainiac’s best friend. Meanwhile, Raj found Amy crying: She hated how “frumpy” she looked in a picture that she saw posted on the Internet. Why not use some of her prize money to get a makeover? Raj asked. Later, at the Wolowitzes, Bernadette asked Howard why that article on Sheldon was really all about her husband, and he suggested that the next article about Amy could be all about Bernadette if she just played her cards right. 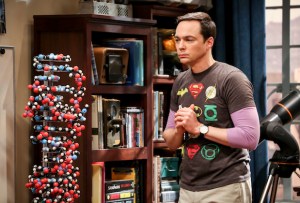 ‘THERE’S NO EARL GREY, YOU FILTHY LIAR’ | Sheldon was bemoaning to Leonard how everything was changing when Raj arrived at Leonard and Penny’s place and introduced Amy 2.0 — new wardrobe, new hairdo… She looked amazing! And Sheldon hated it. Put it back the way it was, he cried. Amy was the one constant that he had left, and now, even she was changing! Needless to say, Amy was crushed. As Sheldon and Leonard followed her as she ran across the hall, Sheldon said that he could’t take any more change. So naturally, at that very moment, Penny emerged from the elevator — holy crap! It was finally working! “This is a nightmare!” cried Sheldon before running down the stairs… only to be met there by Penny, who’d just taken the speedier elevator. He wanted to be alone but… also needed a ride, so sure, Penny could drive him.

The duo wound up at the Cheesecake Factory, where Sheldon admitted that everything was changing too quickly, and that was why he objected to Amy’s new look. In response, Penny reminded him that he’d changed a lot since they first met — and he’d handled all that change. So she was sure that he was going to be able to handle all this, too. (Hilariously, during their talk, we got a peek at Howard and Bernadette on TV telling CNN about how Sheldon and Amy were their best friends.) Meanwhile, Leonard and Raj cheered up Amy and reassured her that she deserved to enjoy her accomplishments however she saw fit. Finally, one thing led to another, and Leonard decided that he was done accommodating Sheldon’s whims. In fact, he was going to move the molecular model that his former roommate had forbidden him to touch — apparently with good reason: When Leonard did touch it, all the little balls fell off! As “The Change Constant” neared its conclusion, Penny got Sheldon to take the elevator upstairs with her. “This is wild!” he exclaimed when it began to move. 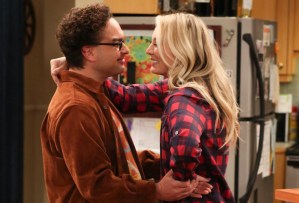 ‘THIS MAY BE THE GLUE TALKING, BUT THAT WAS A VERY PLEASANT 139 HOURS’ | “The Stockholm Syndrome” began two months later with Sheldon and Leonard reassembling the molecular model as Penny and Amy came in, fresh from their fittings for their dresses for the Nobel Peace Prize ceremony. Amy called it the best day of her life since the dressmaker had had to take in her dress — and let out Penny’s! When Amy lured Sheldon to their apartment, Leonard had to ask Penny: Did Amy suspect anything about their secret pregnancy? Apparently, they’d conceived after Penny came home tipsy from her Cheesecake Factory date with Sheldon and “attacked” him. At the Wolowitzes, Howard and Bernadette were wringing their hands over leaving their kids for the first time — and OMG, for the first time, we actually saw Halley and Michael! Stuart and Denise would babysit while they were in Stockholm — what could possibly go wrong?

Of course, Howard and Bernadette weren’t the only characters who needed childcare: Raj did, too. Luckily, Bert agreed to watch Cinnamon while he was away. At Sheldon and Amy’s, the former was trying and failing to get his super-long speech down to 90 minutes. Amy had an idea: How about taking out the retaliatory references to all the people Sheldon felt had wronged him over the years? This was a time for celebration, after all — as evidenced by the tiara she tried on. Later, at Leonard and Penny’s, Sheldon and Amy laid down the law for their friends, intensely going over their trip itinerary and reminding the gang that once they stepped off that plane in Stockholm, they’d all be ambassadors — er, for Sheldon and Amy! In other words, Penny couldn’t get drunk. That was OK, she didn’t like to drink on airplanes, said the notorious tippler, trying to lay the groundwork for her to reject alcohol without revealing that she was pregnant. “Please,” cracked Bernadette. “I’ve seen you drink in the shower.” Cue Howard leering at the idea of them having showered together in 3, 2… (Did anyone else expect the elevator to break anew the way they stuffed it with luggage on their way to the airport?) 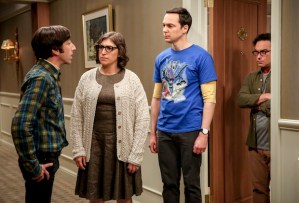 ‘YOU’RE RIGHT, I CAN’T CATCH THAT’ | Though the group was flying business class, the skies seemed anything but friendly. Howard freaked about how far away he and Bernadette were from the kids — and tried to freak out his wife, too. (Risky business, even thinking about upsetting Bernadette!) When Penny kept running to the bathroom to throw up, Sheldon worried that she had some kind of contagion and was going to get everyone sick. The whole trip could be ruined! When he ran panicking to Leonard, Leonard relented and admitted to his oldest friend that Penny was expecting. Whew, said Sheldon. He couldn’t catch that! (Relieved, he then told Amy.) Nearby, Raj asked Howard if the woman sitting next to him with an eye mask on looked like Sarah Michelle Gellar to him. As a matter of fact, she did, Howard said (though we never got to see her full face). Off Sheldon’s disinterest in Penny’s pregnancy, Leonard lit into his buddy. “To hell with you and your Nobel Prize,” Leonard finally said. At the same time, Amy questioned Penny about why she hadn’t confided in her — and Bernadette found out, too.

In Stockholm, things went from comically bad to worse. Not only was Leonard still steamed at Sheldon, but Penny wasn’t just throwing up anymore, she was having crazy cravings, too. (Pickled herring and salted cod… eesh!) When Howard and Bernadette Skyped with Stuart, he tried not to let on that he probably wasn’t going to win a nomination for Babysitter of the Year. Ultimately, though, he admitted that during a game of hide and seek, he’d… uh, lost one of the kids. Oh, and Halley had lost a tooth during a tumble down the stairs. When Howard then told Sheldon that he and Bernadette had to go back home and would miss the ceremony, his reaction was so trademark-self-absorbed that it confirmed for Howard that he had made the right call. Sheldon didn’t deserve to have them there. Leonard decided that he’d had enough, and he and Penny were leaving, too.

‘IF YOU THINK ABOUT IT, HE HAS BEEN KIND OF OUR PRACTICE KID’ | Before the ceremony, Amy tore into Sheldon for breaking their friends’ hearts and driving them away. And she knew he hadn’t meant to do it. “That’s the only reason people tolerate you!” she cried. People at times including her. Meanwhile, Leonard decided that he still wanted to see Sheldon win his prize. Howard called, and he and Bernadette were staying, too. So when we got to the ceremony, the whole gang was there. So was… Sarah Michelle Gellar? Yep, that was her sitting next to Raj and, despite his holding her hand, not on a date with him. After Amy encouraged girls never to give up on any dream they had of becoming a scientist, Sheldon took his turn at the dais. Moved to see his friends in the crowd, Sheldon ditched the speech that he had planned to deliver and instead made up on the spot a super-sweet, funny, heartfelt one during which he thanked his family and, one by one, all of his friends — his other family. Hilariously, he also noticed as he looked down the row, “Is that Buffy the Vampire Slayer?” 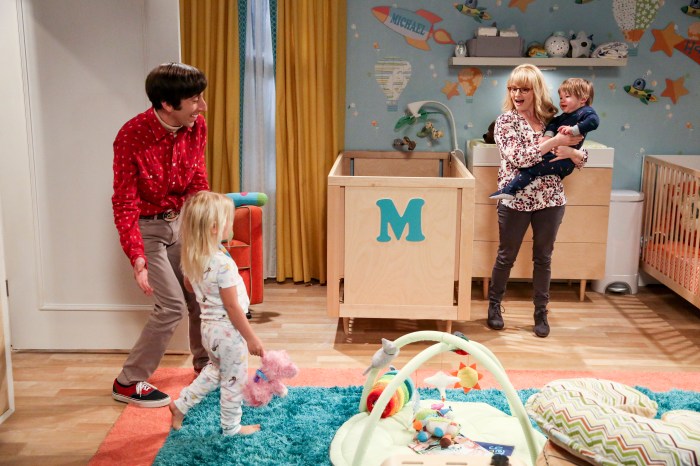 “I have been encouraged, sustained, inspired and tolerated not only by my wife but by the greatest group of friends anyone ever had,” said Sheldon, introducing Raj, Bernadette, “astronaut” Howard, and “my two dearest friends in the world,” Penny and Leonard. “I was there the moment Leonard and Penny met,” said Sheldon, recalling that Leonard had told him their kids someday would be smart and good-looking — which was great since she was expecting. My family doesn’t even know, Penny laughed. Before he was through, Sheldon apologized for being a jerk and told the group that in his own way, he loved them all. (Sniffle.) Finally, in the last seconds of the last episode, an acoustic version of the theme song played over the sweetest of tableaus: one last look at the gang talking and hanging out eating Chinese food in Leonard and Penny’s living room. (And the last vanity card: It read simply “The End.”)

So, do you think the series finale was a, ahem, Big success? Was it everything Ausiello promised it would be and more… or less? Grade it in the poll below, then hit the comments.