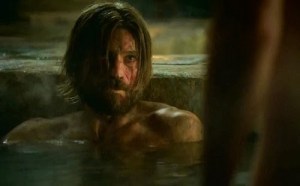 HIGH POINTS | Saving King’s Landing from Mad King Aerys’ wildfire obsession (though it earned him the “Kingslayer” nickname), serving in the kingsguard, losing a hand while defending Brienne of Tarth from rapists, protecting Brienne from a bear attack, trying to save Tyrion during Joffrey’s murder trial by agreeing to renounce his Kingsguard vows and inherit Casterly Rock, freeing Tyrion from the dungeon and certain death after their father’s murder, allying with the North after Cersei revealed that she doesn’t really plan to help Daenerys and Jon fight the Night King; knighting Brienne on the eve of the Battle of Winterfell; making love to Brienne after the Battle of Winterfell

LOW POINTS | Carrying on a years-long sexual relationship (and fathering children!) with his twin sister, Cersei; pushing Bran out a window for witnessing said incest, an act that paralyzed the boy for life; ordering the murder of Ned Starks’ men; killing his cousin in order to escape imprisonment; getting owned by Olenna Tyrell just before she died; nearly dying during the Loot Train Battle; cruelly leaving Brienne at Winterfell when he returned to King’s Landing

CAUSE OF DEATH | Mortally wounded by Euron in a fight to the death — though he killed Euron as well — and then crushed by a barrage of rubble as he held his sister/lover Cersei in his arms.

EPITAPH | Jaime was a cad, a fighter, a fool for (taboo) love — and that last one ultimately did him in.

Now it’s your turn. Hit the comments with your favorite Jaime moments over the years, and then tell us which Game of Thrones character you fear/hope will fall next!