HIGH POINTS | Seeing Joffrey made king; seeing Tommen made king; making peace with Tommen after he apologized for doing nothing while she was humiliated by the High Sparrow; blowing up the Sept and killing everyone in it, including many of her enemies, via wildfire (yes, we agree that it could also probably go under “Low Points,” but it was Just. So. Badass.); torturing Septa Unella; becoming Queen of the Seven Kingdoms; overseeing the capture of Highgarden; enlisting the Golden Company to fight for her; fooling Daenerys & Co. into believing that the Lannister army will support the fight against the Night King; getting pregnant with another one of Jaime’s children

LOW POINTS | Being haunted by a dire prophecy delivered to her as a child; having her most meaningful/longest lasting romantic relationship be with her twin brother; ordering the killing of Sansa’s direwolf, Lady; condoning literally anything Joffrey did; hearing Robert say that he’d never love her the way he loved Lyanna; enticing Lancel to aid in Robert’s death; kidnapping Ros in a misled attempt to get revenge on Tyrion; being promised to Loras Tyrell against her will; having to say goodbye to Myrcella as she left for Dorne; holding Joffrey as he died; being 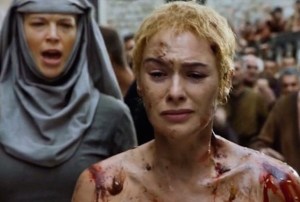 imprisoned by the High Sparrow; walking through King’s Landing, naked and with her hair shorn, while a septa repeatedly cried “Shame!;” realizing Tommen killed himself; poisoning Tyene and making Ellaria watch her die; watching Jaime leave King’s Landing to fight with Jon Snow’s army; telling Euron Greyjoy her child was his

CAUSE OF DEATH | Hubris. Also: Crushed by a barrage of rubble as she held her brother and lover Jaime in her arms.

EPITAPH | No one played the game of thrones better than Queen Cersei, a fierce and cunning lioness who never once concerned herself with the opinions of the sheep.

Now it’s your turn. Hit the comments with your favorite Cersei moments over the years, and then tell us which Game of Thrones character you fear/hope will fall next!