Last Man Standing‘s seventh season came to a close on Friday with an episode that marked a new beginning for Mandy and Kyle.

In the finale, the marrieds were hesitant to move out of Mandy’s childhood home and into their own newly renovated apartment. Having prolonged the process by weeks, Mike was forced to put his foot down and issue an ultimatum; if they didn’t want the rental above Bud’s Buds, he’d go ahead and find another tenant who did. And so, Mandy and Kyle packed up their belongings and relocated. 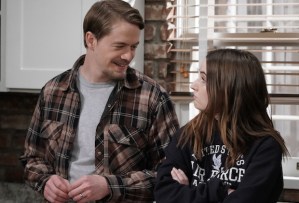 Mike’s tough-love approach didn’t sit well with Kyle, who was raised in an unstable home and cherished the time that he spent under his in-laws’ roof. As they unpacked, Eve explained to Kyle that Mike pushed him because he wants what’s best for his kids. Then, later that night, Mike stopped by the new apartment to pass along a family heirloom to his son-in-law: a waffle maker that belonged to his late father. Kyle thanked Mr. B for the homecoming gift and told him to stop by for waffles anytime.

Below, showrunner Kevin Abott reflects on a successful first year at Fox, and the challenges that came with breathing new life into an aging sitcom.

TVLINE | How are you feeling at the end of this first revival season?
I am surprisingly upbeat. Normally, if you get me on the phone at the end of a season, I’m just so tired and worn out. This was just such a pleasant season. Fox was marvelous. It was a real boost of energy to come back and feel like you were valued by the network. They were just so supportive and on top of things, and we couldn’t have felt more wanted.

TVLINE | Do you think that sense of being wanted contributed to overall vibe of the show this year?
[We felt] like what we were doing was important. That contributed mightily just to the overall morale of the stage… I do think that there’s a subtle quality that translates itself to the screen when the people doing it are really enjoying themselves. And this was just a delightful season, and I think that’s very rare to say about a seventh season of a show, because it gets harder.

TVLINE | Did it feel like the start of a new show, or did it feel like you were picking back up after an already lengthy run at ABC?
The middle years of a show — Seasons 3, 4 and 5 — are usually the ones where you have the most fun. Those are the ones where you feel most secure [from a renewal standpoint] and you’ve gotten to know the characters. A little later into the run of a show, it starts to feel tiring and a little bit like, “Ugh, haven’t we done some of these episodes?” But having that year off [before we returned on Fox] allowed us to change up some of the dynamics… It didn’t feel like working on a seventh season, it felt much more like a third or fourth season, in a very positive way. Coming up with stories was not a problem and everything just kind of clicked. Looking back, this was one of my favorite seasons of working on a show, quite honestly.

TVLINE | What do you think has contributed to the longevity of the show?
I believe in having heart in sitcom. We’re there to be funny, but I want to care about the characters, and for me the perfect episode is the one you’re laughing throughout, and at the end, you get to an emotional place you didn’t quite expect — without being maudlin. The hope is that you view these characters as real people, and the changes in their lives should affect you.
I think it’s really, really hard to maintain shows that are just purely funny, because you have to keep topping yourself. But when [a sitcom has heart], those shows tend to have a little more leg to them.

TVLINE | Right. Without the heart, you’re left with punchlines at the expense of your characters — and after a while, it seems like everyone hates each other.
That’s a really good point. They just start feeling mean, and we want to avoid that at all costs. We love our characters, and I always say, you should love your characters if you’re going to write them. Otherwise, it shows. 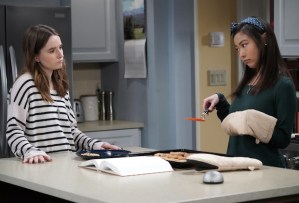 TVLINE | Aside from the Mandy recast, the biggest overall change in Season 7 was the addition of foreign exchange student Jen (played by Krista Marie Yu). Did you intend for the character to become such an integral part of the Baxter household?
Originally when we brought in the Jen character, it was because we were only going to have Eve a limited amount this year, but Krista was more than we could have ever hoped for. Her energy is just different and her perspective is different… and when you’re this late in the run of a series, it’s just so marvelous to have new perspectives to tell stories from. The danger of bringing in an outside character is feeling like that person is somebody you just stuck in there and they don’t really belong, but we feel like the Jen character has become a sister basically… and it has really helped us in terms of missing Eve, because we just don’t have [Kaitlyn Dever] as much as we’d like.

What did you think of the Last Man Standing finale? And what are your thoughts on Season 7 overall? Grade both via the following polls, then hit the comments to flesh out your thoughts.