We just learned the sinister truth about what’s happening at The Farm on Riverdale — and it’s even more gruesome than we thought.

Season 3’s penultimate episode opens in the aftermath of “the deadliest prom night since Carrie‘s,” with the victims of the Black Hood and the Gargoyle King being carted out of Riverdale High in body bags. But “luckily,” Betty is “safe” in the arms of The Farm, where she spots Evelyn hooked up to some kind of medical contraption. (Hmmm.) Betty’s mom Alice and sister Polly sit her down and tell her that, when she was a girl, she tested positive for the “serial killer” gene, and they’re worried she could follow in her dad’s violent footsteps. So Betty submits to a session with Edgar, where he puts her in a trance with one of those click-clacky metal ball toys and gets her to confess that she’s scared of her darker self. Edgar then puts her in an empty room, where she’s confronted by… herself?

Yes, the other Betty introduces herself as “the shadows,” the Dark Betty that’s hidden deep inside her. She accuses Betty of drowning her cat Caramel (!) and pushing Polly down the stairs as a kid, and though Betty denies it, Dark Betty asserts: “I am the real Elizabeth Cooper. You are the illusion.” When Betty comes to, she has a splitting headache, but she’s eager to learn more. She reconnects with Cheryl, Toni, Kevin and Fangs inside the Farm facility, and Fangs is still wincing from a “procedure” The Farm gave him. It’s a purging, Cheryl chirps, to rid the body of psychological pain, and Kevin’s been through it, too… and has a huge scar on his torso to show for it. (Hmmm!)

For her next session, Betty stuffs her ears with candle wax to block Edgar’s hypnosis, and when she’s taken in to see Dark Betty, she sees… it’s actually Polly! She rushes to tell her pals that Edgar is hypnotizing all of them, but they seem pretty OK with it, as long as it makes them feel better. (Cheryl calls her “cuckoo-pants,” actually.) Betty needs proof, and she gets it when she asks Evelyn about her medical contraption. She says she’s been on dialysis since she was a kid, but Betty notes the IV bag she’s on is an immunosuppressant… for organ transplants. She sneaks into the infirmary, and finds jars of organs and boxes earmarked for The Farm’s “Harvest Program.” Edgar is harvesting kidneys, people!

Betty steals an iced human heart and shows it to Cheryl, who sprints in to save Toni just as she’s about to have her own “procedure.” She manages to help Toni escape, blocking the guards to ensure Toni gets away. But Betty isn’t so lucky. She gets tackled by Kevin and Fangs, and ends up strapped to a gurney while Edgar looms over her wearing a blood-stained apron. He announces it’s time for Betty’s “procedure,” and she screams while a nurse puts her under with gas. Is Edgar giving her an involuntary lobotomy? Guys, Riverdale is getting really dark… and I kind of love it. 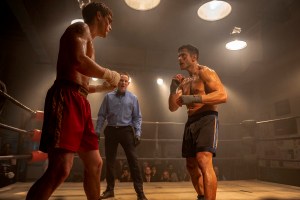 DOWN FOR THE COUNT | Hiram takes his evil gangster act up a notch, plotting to privatize the entire town of Riverdale and buy it, with the governor’s approval. To stop him, Veronica shows Mary the fake contracts she signed with her dad, theorizing that since he technically owns the speakeasy, he’s liable for all the gambling and underage drinking going on there. Mary brings in a friend from the FBI, but they need to catch Hiram in the act. Archie has his own ideas: He barges in on Hiram’s steam room session and challenges him to a boxing match. If Archie wins, Hiram has to leave town — and Veronica’s speakeasy happily takes in a flood of illegal bets on the match.

Fight night arrives, and it’s vicious from the start: Hiram cheats early and often, and then the two just peel off their gloves and duke it out with bare knuckles (!). Hiram’s pummeling poor Archie, but meanwhile, the speakeasy is being raided by the feds, and just as Hiram is about to deliver a death blow, he’s stopped by F.P. and arrested on the spot. He insists to Archie, “I won,” but later, as he stews in a jail cell, Veronica informs him his assets are being seized and auctioned off. So actually, she won. 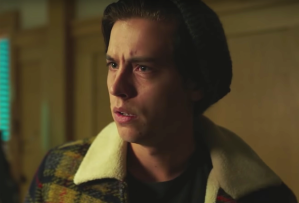 AND THE GARGOYLE KING IS… | If all that weren’t enough, we also got an answer to one of Season 3’s biggest burning questions. Jughead traces the envelope Betty received from the Gargoyle King on prom night, and finds out it came from that pint-sized delinquent Ricky. Jellybean tells him Ricky is in the woods preparing to “ascend,” and when Jughead rushes in to stop him, a dozen Boy Scouts emerge from the woods, with Ricky yelling, “Kill him! Protect the Princess!” Jughead scrambles into the bunker, where he comes face-to-face with “the Princess,” aka Ethel.

She gets the “Lost Boys,” as they’re called, to stand down, but she won’t tell Jughead who the Gargoyle King is. When one of the boys go missing, they track him to that abandoned school bus — just as the Black Hood closes in. They narrowly manage to escape, locking the Hood inside the bus. (Can’t we call the cops and unmask this guy?) Jughead and F.P. get the Lost Boys taken care of by the state, and as a thank-you, Ethel whispers the Gargoyle King’s name to Jughead. “That’s impossible,” he stammers — and we understand why. As he tells Betty, the Gargoyle King is… Jason Blossom? Yes, Cheryl’s brother is back from the dead, as Jughead confirms by digging up his grave and finding an empty coffin.

* Archie and Veronica’s victory came with a side of heartbreak: Encouraged by his mom, Archie ran to rekindle things with Veronica… and found her already rekindling things with Reggie, who helped pull off the Hiram scam. But Ronnie didn’t look like she was too certain about her decision, did she?

* We should just assume that no one is ever really dead on this show, right? Jason Blossom was the first corpse we ever saw on this show — and we did see it — but now he’s back and breathing again, apparently.

* Sorry to pick on you, Mary, but people on this show really need to stop saying “endgame.” That’s not something that people say!

* I don’t know why, but the funniest moment of the week for me was Betty walking in on Kevin and Fangs playing hacky-sack. Not a lot to do for fun around The Farm, it looks like.

* So now the FBI takes an interest in all the illegal goings-on in Riverdale? Yeah, you missed multiple killing sprees over the past couple years, all of which were ultimately solved by teenagers… but better late than never, I guess.