Yes, Riverdale still does normal high school things like the prom… but no, that doesn’t mean the body count takes the night off.

Betty rushes to the scene of her father Hal’s supposedly fatal accident, and she can’t believe — like we can’t — that he’s really dead. She worries that the Black Hood is back on the loose, but F.P. reassures her that they’ve found all the bodies, and they just need to be identified. Meanwhile, Jughead is still on the Gargoyle King case, and finds the King’s secret “gospel” stashed in an old school bus abandoned by Kurtz’s goons. But Cheryl tells them to drop all that depressing stuff: Junior prom is coming up! Betty asks Jughead to be her date, and she does get some closure when the coroner tells her they identified Hal’s DNA in a hand found at the accident. So maybe they can just forget about all that and dance the night away?

Well, maybe not. Kurtz’s autopsy reveals he had a ritualistic back tattoo matching the symbols carved into Dilton and Ben Button, and the local tattoo artist remembers doing a tattoo like that a year ago for another guy: sandy hair, blue eyes, “weirdly magnetic.” Hmmm… sounds like Edgar, right? Betty thinks so, too, and barges in on a ceremony at The Farm, accusing Edgar of being the Gargoyle King. She demands that he take his shirt off — she’s not the first woman to demand that, we’re betting — and when he does, he reveals a ridiculously chiseled torso… but no back tattoo. Huh. There goes that theory.

Jughead’s “gospel” reveals another clue: If the Gryphon Queen declares her loyalty to the King at a big bacchanal, he will show up. So he and Betty devise a plan to get Betty named prom queen — with a new G&G-inspired medieval theme — to lure the King to the dance so they can catch him. Betty rigs the prom queen vote so she’ll definitely win, and sure enough, at the prom, a masked stranger hands her a note: The Gargoyle King wants her to return to the site of the Midnight Club’s original Ascension Night… alone. 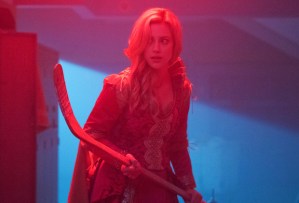 Betty walks the halls of Riverdale High — just like her mom Alice did that fateful night in the ’90s — and finds a restroom with “Flip For Your Fate” written all over the walls, and a pair of chalices waiting for her. “Not gonna happen,” she declares, and walks out to find the Gargoyle King waiting. She confronts him, demanding to know who he is and pointing a gun at him (!), when she’s tackled… by the Black Hood! He’s back, and sporting a sharp hook where his missing hand used to be. He chases Betty through the halls, and she stumbles over more than one dead body along the way, before he vanishes into the night, leaving Betty a blubbering mess.

So the Black Hood is back, and the Gargoyle King is still out there. That’s two killers at large, possibly even working together, as Betty points out. She knows she’s not safe, and she thinks Alice might be next, since Hal knows she’s marrying Edgar and handing over the twins. Edgar, magnanimous as always, offers to take Betty in and protect her… and Betty’s so desperate, she actually says yes. Welcome to The Farm! 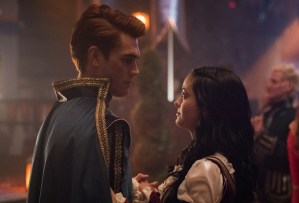 PUNCH-DRUNK LOVE? | Archie’s mom Mary is back in town — hi, Molly Ringwald! — but she doesn’t love the idea of Archie taking up boxing. (“I won’t support you getting pummeled,” she tells her son, which is understandable. He’s already been pummeled a lot!) In fact, she won’t sign a parental permission slip to let him enter a boxing tournament, so he forges her signature so he can enter it anyway. Then she sets him up with a Navy recruiter who might be able to offer him a boxing scholarship, and who sets up a match for him on the same day as the tournament. It’s like one of those Three’s Company episodes where Jack had two dates on the same night, only with double the brain damage.

On top of all that, Archie has to lose weight to qualify for the tournament, so he starves himself all week and loses a bruising tournament fight before going to meet the Navy recruiter… and promptly collapses in the ring. Mary chides him for pushing himself too hard, but agrees to help him pursue his boxing dreams. Plus, Archie and Veronica might be rekindling things: He asks her to prom as friends, though no one in town believes that’s all they are. They have a common enemy again, too. Veronica tells Archie that Hiram lied to her when he agreed to sell her Pop’s, handing her a fake deed — and she wants his help in bringing her dad down, once and for all. 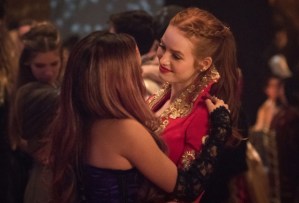 * Cheryl did something very un-Cheryl this week: She turned down an opportunity to bask in the spotlight! She planned for her and Toni to run for prom queen together, but Evelyn informed her that doing so would go against The Farm’s ideals of equality. (Cheryl sassed back: “Aren’t you, like, 30? How many proms have you been to?”) She backed down, though, when Edgar threatened to take away her visits with Jason, but she was still stewing about it at prom. Could this lead to Cheryl and Toni revolting against their dear leader, perhaps?

* So who is the Gargoyle King, then? Does anyone else match the tattoo guy’s “weirdly magnetic” description? Or did Edgar just get the tattoo removed?

* Luke Perry’s absence was keenly felt this week, with Mary moving back to Riverdale to keep an eye on Archie while Fred is “away.” Still not sure how the show will write him off, but it’s bound to be heartbreaking.

* Are Kevin and Fangs together now? I remember them kissing at The Farm’s initiation ceremony, but I never realized they were a full-fledged couple. Maybe because we haven’t heard Kevin say two words since he joined The Farm.

* Where did the students of Riverdale High all get such fantastically elaborate medieval costumes for prom? Especially when the theme was seemingly set just days earlier?

* Veronica had this week’s best quote, when she was bewildered as we all were at the mention of prom: “Prom is this weekend? We still do things like that here?”