The game of Gryphons & Gargoyles made a big comeback this week on Riverdale — and one character most definitely lost.

With Jughead’s little sister Jellybean kidnapped by the Gargoyles, Jughead and F.P. get roped into playing a round of G&G with the supremely creepy Kurtz in order to win her back. When Gladys joins them, Kurtz mischievously alludes to her drug-peddling secret, first by dubbing her “The Alchemist” in the game and then pushing her to confess her biggest secret during a “Cards on the Table” challenge. She breaks down and admits to F.P. that she’s the one selling Fizzle Rocks around town, and F.P. is furious; he sets aside his feelings to get Jellybean back, but he warns her, “There will be a reckoning.” (Oh yes, there will.)

For the next challenge, Kurtz orders the Jones family to rob Pop’s, giving him the cash so he can skip town. They reluctantly put on gargoyle masks and go in to rob the register, but Pop Tate has other ideas: He pulls out a shotgun and clips F.P. in the arm, with only Jughead and Gladys getting away. Then Kurtz sets Gladys up in a fight with… an eye patch-clad Penny Peabody! He gives them both a pair of ninja sais to battle with — Riverdale is wild, man — and Gladys gets an arm broken and a kidney ruptured before she finally beats Penny into submission. (She heads to the hospital… but makes sure to stab Penny in the thigh on her way out.) That just leaves Jughead, the lone Hellcaster, to complete the quest.

Kurtz leads him to a junkyard where he gives Jughead two refrigerator doors to choose from, but Jellybean isn’t behind either one. Kurtz pulls a gun and locks Jughead in one of the fridges while telling someone on the phone, “The Hellcaster’s been contained. You may kill the princess.” (!) But when Jughead kicks his way out, he finds Kurtz lying on the ground — dead? — and the Gargoyle King looming over him. He rushes home to find Jellybean unharmed, and seemingly unaware of the whole ordeal. Once the dust settles, Gladys hits the road again, leaving Jellybean behind with Jughead and F.P., where she’ll be safe. Although it is Riverdale… that town has to have the highest murder rate per capita in the nation, right? 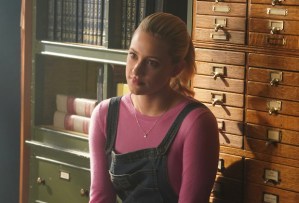 FARMER TAKES A WIFE | While Betty works to get her dad Hal transferred to Hiram’s new prison — he can get a nice view of the river! — she flips out when she learns that Edgar is preparing to marry Alice… and adopt Polly’s twins Juniper and Dagwood. Betty snoops around in Evelyn’s student file and discovers she’s been a junior in high school for a full decade now. Evelyn’s actually 26 years old, and she’s not Edgar’s daughter… she’s his wife! (Gasp!)

Penelope steps in to negotiate with Edgar and manages to bring the boy twin Dagwood home, but leaves the girl Juniper with The Farm. That’s not good enough for Betty, who charges in to rescue Juniper with Toni’s help, but Toni leads her instead to a Farm ceremony where everyone’s beaming. Oh no, Toni drank the Kool-Aid, too! Betty tries to expose Edgar and Evelyn’s dirty secret, but everyone already knows the truth, and they try to get Betty to join them, pounding on her car like a pack of zombies as she flees. There’s one more shock in store for Betty, though: Veronica tells her there was an accident when Hal was being transferred… and there were no survivors. 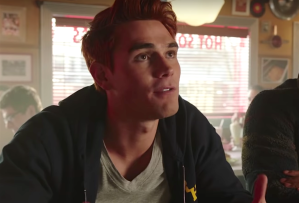 RING OF TRUTH | Yes, Archie’s boxing opponent Randy died in the ring, and yes, Archie blames himself. It doesn’t help that Elio is blaming him, too, advising him to “lawyer up.” A distraught Archie swears off boxing, and things go from bad to worse when a police raid turns up those drugs Mad Dog tried to give him, and they both end up in jail. Veronica bails them out and tries to clear their names by giving them a drug test, but Randy’s family still blames Archie, with Randy’s sister landing a very solid slap across Archie’s face.

Archie wants to do something to help Randy’s family, so he takes the $50,000 in prize money from the tournament he won — along with some cash from a fundraiser at Ronnie’s speakeasy — and hands it over to Randy’s sister. He even climbs back into the boxing ring to spar with Mad Dog after a pep talk from Veronica. But an old enemy is back: Hiram sits in a steam room with Elio, conspiring once again to crush his teen nemesis. I thought he and Archie agreed to a truce? Guess you can’t even trust a murderous mobster these days.

* The Archie/Josie fling was fun and all, but Josie called an end to it this week, leaving town to go on tour with her musician dad. “I’ve loved our time together… but we’re not endgame,” she tells him. (And Archie didn’t seem all that broken up about it, either, did he?) This leaves the door wide open for a “Varchie” reunion, of course… and for Josie to go join Lucy Hale and the rest of the Katy Keene cast.

* So if the Gargoyle King got rid of Kurtz and left Jellybean unharmed, it must be someone who’s ultimately sympathetic to Jughead and his family. I’d make a guess, but it’ll probably turn out to be ten other people before we actually find out.

* Hal isn’t really dead, is he? There’s no way Riverdale can resist bringing the Black Hood back for another round of murder and mayhem.

* Of course Evelyn is an anti-vaxxer, on top of everything else.

* Riverdale High really needs to do a better job securing their student files. Betty just waltzed right in! Shouldn’t they have digitized them by now, too? A password with two-factor authentication would help a lot.