As The Voice sped toward Season 16’s semifinals Tuesday, five — count ’em, five — more singers were given the chop. Based on Monday’s performances by the Top 13, historical indicators and TVLine’s poll that followed our recap, I figured the departing quintet would be: Team Blake’s Oliv Blu, whose vocals haven’t been on par with her styling; Team Adam’s LB Crew, whose voice failed him when he reached for a high note; Team Blake’s Kim Cherry, whose enthusiastic rapping always seemed unlikely to strike a chord with The Voice’s country-leaning audience; Team Legend’s Celia Babini, whose stage dive played like foreshadowing; and Team Adam’s Mari, who has the misfortune of being on Team Adam. Were my guesses anywhere close to right? (Let’s face it — my track record is as spotty a predictor as Adam’s is as a coach!)

Before we found out, John Legend and his team performed a fairly heavenly rendition of “I Say a Little Prayer,” and Blake Shelton and his comparably huge team performed a version of George Harrison’s “Got My Mind Set On You” that I kinda wanted to put out of my mind as fast as possible. (Though it was pretty fun when Kim Cherry went all Lisa Simpson on the sax!) Then, in the moments of truth…

Bottom Three (Immediately Eliminated)
Celia Babini (Team Legend)
Oliv Blu (Team Blake)
Jej Vinson (Team Kelly) — OK, this one was kind of a surprise; I thought he was more popular than this!

Kim Cherry (Team Blake), “My Lovin’ (You’re Never Gonna Get It)” — Grade: B | Kim turned the tude up to 11 on her En Vogue cover and sounded pretty damn good while she was at it. What I especially dug was that she had so much raspiness in her voice that you coulda used it to scrape paint off the walls. “I pray America votes you through tonight,” said her coach when she had finished. I had a feeling at that point that she was gonna be OK. 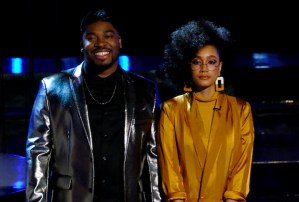 Mari (Team Adam), “Latch” — Grade: B+ | Poor Mari had barely been able to muster a smile all night. Maybe she guessed that she was gonna wind up in the danger zone. Regardless, when she hit the stage, she delivered an impressively poised, emotional performance. And vocally, she totally outclassed Kim. At first, Mari seemed to struggle a bit — or maybe I just had trouble hearing her in her whispery lower register— but ultimately, she sang with a purity, a clarity of voice that I didn’t think we’d heard from her before. Big thumbs-up. Kim’s fun, but Mari totally had my vote.

LB Crew (Team Adam), “Better” — Grade: D | Aw, LB. He seems like a likable enough fellow. But his singing here reminded me of karaoke night when somebody gets up after one drink too many. The guy clearly has a voice. However, he wasn’t just all over the map on this number, he was all over the map, the globe, the atlas… It was a hot mess. And he seemed to know it, too. At the end, he was all but saying his thank-yous and goodbyes.

Eliminated | The last of Team Adam — Mari and LB Crew

So, your reaction to the eliminations? Vote for the departing singer you’d have saved below, then hit the comments.