Say what you will about Season 16 of The Voice — and we have! — it’s wound up with a pretty good Top 13. So good, in fact, that when I went to take TVLine’s poll following last week’s bloodbath, I couldn’t pick an eliminated contestant that I would’ve been super mega eager to save. Maybe Team Kelly Clarkson’s Rebecca Howell, but even then, I’d have sooner saved Mikaela Astel, whom Kelly dumped during the Battles in favor of The Bundys.

I was relieved that Team Blake Shelton’s Carter Lloyd Horne squeaked through after choosing an Elvis cover that I didn’t think showed off what was special about his voice; I was glad that if Kelly wasn’t going to save Rebecca, she at least saved Jej Vinson instead of Abby Kasch; I was psyched that John Legend gave another chance to Celia Babini. Heck, even Adam Levine showed some taste, using his Save on Mari. (That said, I have to think that the producers told The Comeback Stage competitors to please, please, please pick as their coach Adam, whose team was all but wiped out. Otherwise, why would LB Crew — or anyone! — board that sinking ship?) But, did the cream of the crop live up to their potential as they tackled fan-picked songs Monday? Read on, and we’ll discuss… 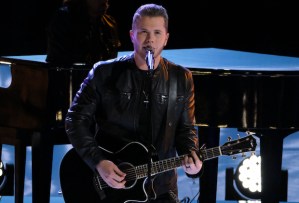 Gyth Rigdon (Team Blake), “Nobody But Me” — Grade: B- | “I didn’t make it tonight, we made it tonight,” said Gyth by way of thanking his fans, who chose him a song by his coach to perform. In rehearsal, Blake said that Gyth sounded better on the number than he did, which was beyond exaggeration, just plain silly. What Gyth actually sounded was pretty good, especially in his bigger, raspier moments. But otherwise, his voice sounded a little thin, especially compared to his coach’s.

Kim Cherry (Team Blake), “Whatta Man” — Grade: B | As much as I love the idea of a nerdy, anything-goes rapper with a voice as big as a stadium, Kim generally kinda misses the mark for me. I always think she’s fun but not great, likable but not amazing. Here, though, it clicked for me. Maybe it was because the Salt-N-Pepa smash that her fans chose her was more rapped than sung. But I even liked the way she growled the sung parts. So I’d be extremely curious to hear her take Kelly’s suggestion and just sing sometime, should she advance. 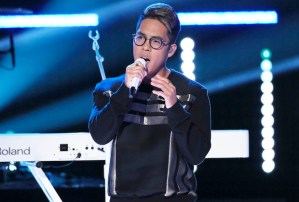 Jej Vinson (Team Kelly), “Close” — Grade: C | “I’m very shy as a person,” Jej said in his pre-performance interview. So it was hard for him to even say that he had fans. Before he went on, I wondered whether, since he strikes me as more popera than pop, the Nick Jonas number that his admirers chose him was a mistake. Aaand… it was. Though he was determined to unleash “the beast in me,” he didn’t seem to really connect emotionally with the song, and when he went for what were supposed to be the massive, showoffy notes, it sounded less passionate than just not pretty.

Andrew Sevener (Team Blake), “She Got the Best of Me” — Grade: B- | My favorite of Blake’s country guys sounded in rehearsal like he was gonna slay his Luke Combs cover. “He does not back down from any song,” noted his coach. He just attacks it. And why would Andrew back down from a song? I don’t think I’ve heard one yet that he hasn’t sung the hell out of. This was definitely not his best performance, but it was still strong enough to remind us that his voice is as unstoppable as a stampede. (In fact, it was so unstoppable that John suggested afterwards that his performance could’ve used a little finesse.) 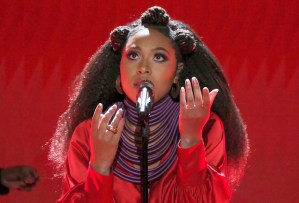 Oliv Blu (Team Blake), “Smooth Operator” — Grade: D | After Oliv made a critical misfire with her all-over-the-place “Girl From Ipanema” cover during the Live Playoffs (requiring her coach to use his Save on her), I thought it was smart of her fans to assign her a more straightforward, poppier number. Unfortunately, she sounded pitchy from the word go. She managed to land a decent long note along the way, but overall, this was just painful. I couldn’t for the life of me figure out how John could say afterward that he thought she’d sung with beautiful control and clarity. Come again?

Dexter Roberts (Team Blake), “Something Like That” — Grade: A- | Before his performance, Dexter dedicated his Tim McGraw cover to a fan back home who has cerebral palsy. The show even flew her and her family to L.A. so she could hear him live. He did not disappoint. Dexter hit that stage like he owned it, and sounded so fantastically, quintessentially country, he could’ve been singing with a piece of hay between his teeth. Simply put, his performance was as solid as the broad side of a barn. 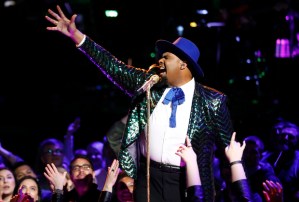 Shawn Sounds (Team Legend), “A House Is Not a Home” — Grade: A | “Shawn is really in his sweet spot” with this Luther Vandross cover, suggested his coach before showtime. “He can really knock everybody’s socks off.” Suffice it to say, I for one am now barefoot. Out of Shawn’s mouth tumbled one showstopping run after another, and he made it all look so freaking effortless. He’s just a born performer. Jej wanted to “unleash the beast,” but it was Shawn who actually did. “We’re going all the way,” his coach told him afterwards. And following a performance like that, I could believe him.

Celia Babini (Team Legend), “Shallow” — Grade: C+ | In rehearsal, John advised Celia not to downplay the break in her voice; that, he said, made her sound like an artist and not just somebody doing a cover. On stage, the 18-year-old struggled a bit with the conversational beginning of the Oscar winner. And her vocal heading into the chorus was awkward at best. Yet the overall impression that I was left with was still “Wow.” Was it technically great? Definitely not. There’s just an emotional power to Celia’s performances that nonetheless resonates. Weird. 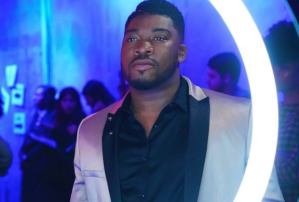 LB Crew (Team Adam), “I’ll Make Love to You” — Grade: C | Done 100 percent right, the Boyz II Men classic seemed like the kinda big number that could return the Comeback Stage winner to the competition for real, not just as a gimmick. And LB was down for it. Fans “might even cry” when they heard his rendition, he said before his performance. On stage, he started off fine, but I wasn’t exactly reaching for the tissues. Then he hit the massive notes in the middle of the song, and I was like, “Well, all right, then!” Unfortunately, he followed those up with a high note that crashed and burned so badly, it downgraded what would’ve been a pretty good performance to one that was just OK.

Mari (Team Adam), “Foolish” — Grade: B+ | In rehearsal, Adam told Mari that he’d saved her during the Playoffs because she was the most prepared, had taste and that intangible X factor. And as much as I love to disagree with everything Adam says, I couldn’t argue with that. On stage, she sang with a cool confidence that built and built over the course of the song. The Ashanti hit that her fans assigned her didn’t let her show as much range as I might have liked, but there was no denying that she sounded like a star. 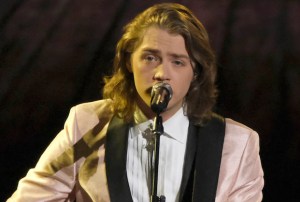 Carter Lloyd Horne (Team Blake), “Let It Go” — Grade: A- | Before his performance, Carter said that he thought his fan base was going to be, like, his mom. Instead, he was getting invitations to proms right and left. And I imagined that fan base would only keep growing in the wake of his performance Monday. Carter’s fans did him a real solid by giving him James Bay’s hit to do; it allowed him to turn loose his spectacularly lived-in voice in a way that felt intimate as hell. What’s more, he seemed to be feeling the song as much as singing it, which often separates the very good performances from the great ones.

Rod Stokes (Team Kelly), “When a Man Loves a Woman” — Grade: A | Oh, another good song selection by the fans! This classic was made for Rod, who somewhere along the line, went from being someone I could barely remember to being someone I was eager to hear sing every week. On stage, he sang with polish and passion in equal measure, going from massive notes to even more massive notes before ending with a bit of refreshing intimacy. Dunno if he’ll be able to compete with Blake’s army of country guys, but damn, is he good.

The Voice: The Singers Likeliest to Win Are…

Maelyn Jarmon (Team Legend), “The Scientist” — Grade: A+ | Maelyn’s fans didn’t make it easy on her, giving her a Coldplay classic whose melody is as intricate as a spider web. But she navigated it so flawlessly, she could’ve convinced me that she’d woven it herself. Seriously, does Maelyn ever screw up? This was gorgeous, packed with emotion… absolutely stunning. I want to buy Maelyn’s album, and I want to buy it yesterday. John nailed it when he called her the best singer in the competition.

So, which of the Top 13 did you think gave the best performance? Vote in the poll below, then hit the comments.