The following post contains spoilers for Monday’s season finale of The Resident.

The Resident‘s second season drew to a close on Monday, and its sophomore finale was heart-stopping in every sense of the word.

The hour — which was previously teased by EP Todd Harthan as “a harrowing ride” for characters and viewers alike — was indeed distressing, particularly for Nic. Though Nic finally convinced her estranged father, Kyle, to donate a kidney to Nic’s sister, the transplant had its fair share of obstacles.

First, Kyle nearly died on the operating table after anesthesiologist Shira — the one who’s been stealing drugs from Chastain for her personal use — overdosed before Kyle’s surgery, ultimately collapsing and ripping out Kyle’s breathing tube on her way down. Nic and Conrad found a workaround to keep Kyle alive, and his kidney was removed successfully… only for Jessie’s surgery to go equally haywire when she needed three massive shocks to the heart in order to stabilize.

At first, both Kyle and Jessie’s medical crises were averted, and it seemed that Jessie’s transplant had gone smoothly (potentially weak heart notwithstanding). But in the final moments of the episode, just as Nic was basking in the joy of both family members surviving surgery, her pager went off, and she raced back into the hospital to find Conrad doing frantic compressions on either Jessie or Kyle. (The show never revealed the endangered character’s identity.)

Despite Conrad’s best efforts (and judging by the sweat on his face, they really were his best efforts), the character in question flatlined just before the credits rolled, leaving Nic utterly stunned — and leaving us to wonder whether it was Jessie or Kyle who had potentially just died. But series co-creator Amy Holden Jones is quick to clarify that “someone may be dead,” and viewers shouldn’t jump to conclusions about Jessie or Kyle’s possible demise.

“There are a lot of worlds that exist from the point we left you on,” she reveals. “There’s a world where, indeed, someone dies, which is possible. There’s a world where someone dies but is brought back in some version of life, and that has to be dealt with. What constitutes life?… And the third possibility is that they are saved. Those are all possibilities. We don’t actually know that someone dies at this point.” (Though she does add with a laugh, “But it’s likely.”)

The finale was eventful for Chastain’s other doctors, too. Dr. Bell got into business with Red Rock Mountain Medical, a conglomerate that wants to buy the financially unstable hospital… provided that Bell’s authority at Chastain is significantly reduced. Meanwhile, Shira was arrested for her drug use, Mina moved on from Micah after learning he had quickly rebounded with a new girlfriend, and Kit revealed she’d gotten back together with her ex-husband. (Conrad and Nic also reconciled, in a scene you can watch here.)

We asked Jones for her insights on the episode’s biggest moments, as well as what the future holds for Chastain and the many relationships inside its halls.

TVLINE | Have you already made the decision internally about whether it’s Jessie or Kyle who flatlines, and whether he or she actually dies? Or will that be determined when you start breaking Season 3?
We know the options. Interestingly enough, I’ve polled people working on the show — including the entire writers’ room — and everybody wants the same person to die but me. [Laughs] So I don’t really know how that’s going to play out. And most people want someone to die, and I’m not sure I do want someone to die. Even if someone does, by the way, that doesn’t mean they won’t be in Season 3, because they would be, in the form of flashbacks and previous stories that we haven’t seen. They would still be there, to some degree. How it will be decided has to do with how we want to be playing stuff out. When you see Thanksgiving dinner, do you want it to be with Marshall and Kyle? Do you want it to be Marshall, Kyle and Jessie? Have we played all the stories with Jessie that you need to play? Have you played all the stories with Kyle?

And it all has to do with how this will affect Nic, because this is a big deal, how it affects her. She has been desperately trying to save her sister. Did she succeed or fail? That’s important to what she’s going to go through next. And she talked her dad into doing this. He felt it was dangerous, and what if it actually really was? Now, we don’t want to say kidney donation is dangerous. It’s really quite safe. What gets him is not the donation; what gets him is the unaccountable element that doctors aren’t drug tested, and anesthesiologists have a high rate of drug addiction. It’s not something that’s being monitored enough. 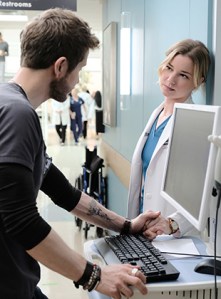 TVLINE | Nic and Jessie have a great scene where Nic is told not to blame herself if Jessie dies. But we already know that Nic does blame herself when these patients die, as does Conrad, who’s clearly trying to save either Jessie or Kyle in that final scene. How will the two of them deal with this potential death, emotionally?
Regardless of what happens, Nic’s got an emotional journey ahead. The concept for Nic and Conrad has always been, for me, not that they will be breaking apart and coming together, breaking apart and coming together. That only lasted a few episodes. I’m trying to show a really good couple — a really strong couple, a couple that should work — and how, even with all of their shared goals and desires, people have hills and valleys. People have issues that they have to cope with, as Nic says in the beginning [of the finale]. The problems never stop coming. As Conrad said when he broke up with her, “Why aren’t you seeing that I’m here for you when you’re having those problems? That’s what we’re supposed to be doing.” That’s where they’re going to be going forward, whatever they face. Conrad’s going to have some significant issues to face and will need all of our team behind him — and one of the people he’ll need behind him, who is there for him, is Nic. And he’s going to be there for her. That’s something I’ve been working for this whole season… They are solidly a team now at the end of Season 2.

TVLINE | Was it hard for you and the writers to resist making Alec Shaw a bigger problem for Conrad and Nic, which we typically see in love triangles like this? Or were you adamant that he would never become a real love interest for Nic?
The hard part for me was introducing him at all. This is something that the network and studio — and other people who have very wonderful input on the show and very strong support of the show — wanted to see. There was a moment when he came in and we thought, “Wow, he’s really a great guy. Maybe there’s something here.” But it wasn’t discussed very seriously, because the concept for [Conrad and Nic] has always been that this wasn’t going to be a couple that has all these other love interests. It’s going to be a couple that survives the vicissitudes of life and doesn’t fall for other people… And we decided that it was more interesting to make [Alec] the kind of person who ultimately breaks more rules than Conrad would break. And Conrad realized, “Wait a minute, there is a bridge you do not cross in trying to save people.” Alec becomes an example of when it’s going too far, and buying organs is one of those things.

TVLINE | We also saw Bell on the verge of signing a contract with Red Rock Mountain Medical — and this is the second time that Bell has lost some of his power at the end of a season. It happened first when Marshall Winthrop became Chastain’s chairman, and now again with Red Rock. What toll will that take on him in Season 3?
Interestingly, it’s a different emotional thing that is going to happen to him, because Bell changed somewhat throughout the course of this season after seeing what happened with the medical devices — and he’s fallen for Kit. I think we’ve succeeded in softening Bell’s heart somewhat. He’s always going to be the pragmatist, always the one who knows you can’t make the hospital run on air. It has to make money. But he’s actually going to be somewhat in opposition to Red Rock Medical’s worst impulses… Bell will be caught somewhat in the middle. He wants to be a pragmatist and he wants to retain the power, so he’s not going to want to alienate these people too much. But he’ll be trying to negotiate between those two forces and somehow keep the hospital going and his job going.

This is happening all over the country, conglomerates are buying up hospitals. And if they own all the hospitals in an area, your chance of price competition is over. The price is going to be fixed at all of them, and there’s no such thing as a free market anymore. It’s not good for patients, and it’s not good for doctors either. We’re trying to show that profit-over-patients does affect doctors, too. It’s not just greedy doctors looking for more money. It’s dedicated doctors being forced to do too many procedures that they don’t want to do. So that is a vast area. It sounds dry, but there are human stories that are not dry at all that will show you some of the scams that go on. It will never be the A-story. Our A-story will always be our people and saving the patients we care about, but underneath it, there’s always a wealth of new stories to show of the things that happen when hospitals are trying desperately to search for more money.

TVLINE | You mentioned Bell’s affection for Kit, and their relationship has become one of my favorites this season. Will Kit be a part of Season 3? I know Jane Leeves only signed a one-year deal with the show, and she’s attached to another pilot, as well.
We do have her for a certain number of episodes in the first half of next season, and we have a very big role for her. But we also have a big role for the entire season if her pilot isn’t picked up, because we love her also. The relationship that they have, that’s so good on screen, is mirrored by the relationship that Jane and Bruce [Greenwood] have in real life. They have a wonderful friendship, they get along and hang out on set. So it won’t necessarily be a love relationship [between Kit and Bell], but it will probably be a friendship, a very deep friendship. Bell is unbefriended, or feels he’s unbefriended, at the end of this episode, and Kit is telling him, “Because I’m back with my husband, that doesn’t mean you’re unbefriended, because I am your friend.” And that is something that may end up going forward — or, if he ends up not being forceful enough [to do what’s right with Red Rock], it may cause a rupture between them. I don’t want to hope Jane’s pilot doesn’t go, but we’ll be happy to have her in the second half, as well, if it doesn’t.

That’s a wrap, Resident fans! What did you think of Monday’s finale? Grade the episode via our poll below, then drop a comment with your full reviews!