Suits and its spinoff Pearson are teaming up this summer: The ninth and final season of the flagship series will premiere on Wednesday, July 17 at 9/8c on USA Network, leading into the debut of the Gina Torres-led offshoot at 10 pm.

Suits‘ 10-episode swan song will explore Harvey and Donna as a romantic couple in the aftermath of his Season 8 finale epiphany. The realization that Donna is the one with whom he wants to share his wins and losses led Harvey to rush to her home, after which the pair had sex.

“We’re going to follow their growth,” showrunner Aaron Korsh told TVLine during a post mortem Q&A. “When you’re in a relationship with someone, learning how to communicate with them is probably the most important key to success. They’re going to have to learn how to handle their issues in a relationship the way people do, the way couples do, and we’re going to see that.”

Are you excited for a Suits-Pearson doubleheader this summer? Check out the official poster for Pearson below, then drop a comment with your thoughts! 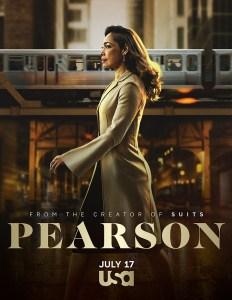