The long-awaited moment came after a series of events that led Harvey — who was at risk of being disbarred — to realize what’s been in front of him all along. The short version: In order to protect Donna, Harvey asked Thomas to lie to the ethics committee and say Harvey shared the privileged information, which made Thomas question what Harvey and Donna are to each other. In the end, it was Robert Zane — wanting to make up for his past mistakes with Samantha’s attacker — who took the fall for Donna and Harvey, sending him into early “retirement.” 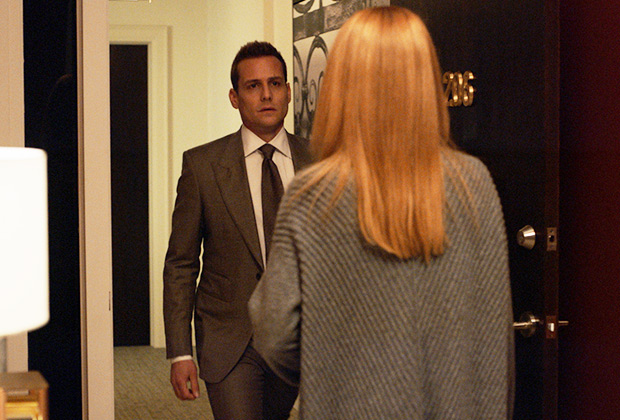 While Samantha pondered life without her mentor Robert, who loved her despite her faults, Harvey came to his own realization about who he wants to run to when he has a big loss or win. With that, he rushed off to Donna’s apartment, eagerly knocking on the door. When she opened it, neither one of them said anything before she stepped back and he moved in for a passionate kiss, with Donna eventually leading them to the bedroom.

Below, executive producer Aaron Korsh reveals the surprising way the “Darvey” twist was born and what it means for the pair’s future in the final season. Plus: Is something brewing between Harvey and… Samantha?! (Read TVLine’s post mortem with star Gabriel Macht here.)

TVLINE | Why was now the right moment for Harvey to have this epiphany about Donna?
We almost always write the finale up in Toronto, just before we shoot it. There was no contemplation of this happening. It was not on our minds going up. If you had asked me when I got on the plane to go to Toronto, “Are Harvey and Donna going to get together at the end of Season 8?” I would have said, “What? No.” But in discussing the writing of the scene with Donna and Thomas, where he’s asking what Harvey means to her, it just opened up a huge discussion and debate. It was kind of late at night, and tempers flared, guns and knives were pulled. I’m just kidding! But we just kept saying, “What if this happened? What if that happened?” We were just debating things, and all of a sudden, I said, “What if Harvey goes to Donna?” I pitched it out, and we all three — [writers] Ethan [Drogin], Genevieve [Sparling] and I — loved it. We all three thought it was a great thing to do.

TVLINE | Did it feel like those feelings were always there, but it was just time to act on them?
Yeah, obviously, something has been there since the beginning. We’ve put it in there since the beginning. The question [was]: When were these people, if ever, going to act on those things? It just seemed like when we were writing the episode, the way it was going to come out was… when Samantha’s saying, “What am I going to do when I have a huge victory and the one person I want to run and tell is not there?” Donna wasn’t at the hearing for Harvey, and he went and looked for her afterwards, and she wasn’t there. And it all of a sudden clicks in for him, “She’s the person I want to tell everything to.” Now that I think about it — I didn’t think about it at the time — it’s a little bit similar to When Harry Met Sally. He just sort of realizes, “This is the woman for me.” 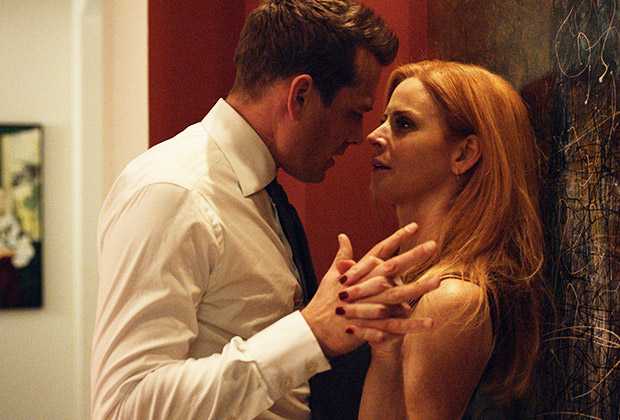 TVLINE | Was there any debate about what he would do after he has this realization and how far should it should go? Should he just tell Donna what he’s feeling? Should he just kiss her?
Once the idea hit, it instantly clicked in, and I was like, “This is how we should go.” But there was a thought to when Donna opens the door, we had written like five lines. He says one thing, she says another, he says another, she says another, and then they do it. We had a pre-rehearsal of that scene the day before we shot it, because this is a big scene. We wanted to get on the same page with Sarah [Rafferty] and Gabriel [Macht] and make them comfortable. And we did try it where they said those words, and we thought we were going to film it with those words and without those words. But then on the day, it worked so well without the words that we felt like it was unspoken when he [knocks on her] door and she’s there.

TVLINE | What did they say in that alternate version of the scene?
I think it was, [she] opens the door, he says, “You weren’t there.” [She says], “I’m here now.” I can’t remember the other two lines… But regardless, it was better unspoken to me.

TVLINE | In the scene between Donna and Thomas, she seemed a bit conflicted about her feelings for Harvey. She said she wanted to cut him out, but she wasn’t sure if she’d ever be able to. In this moment at the end, has Donna accepted that Harvey is it for her?
I believe so. And as I said, it was that scene between Donna and Thomas that led to the debate that led to the realization at the end. Because we were having a discussion about, “Does Donna want to cut Harvey out? Does she not? What [are] her true feelings?” I didn’t buy that Donna’s in love with Thomas this quickly. I thought we had not earned that. So out of that thing, we were like, “But does she want to be rid of Harvey?” And I think in that moment, she did want to be rid of Harvey, but the honest truth is she doesn’t know if she’ll ever be able to be rid of Harvey, which is an interesting realization that she said aloud. She didn’t say it to Harvey, but she said it to Thomas. … You could say the second Donna says aloud, “I don’t know if I’ll ever be able to cut him out, but I want to,” and Alex sort of tells Donna, “You’re closing the window on Harvey. When the window got closed on me, it was how I realized I didn’t like being on the other side of the glass,” it’s like Donna’s feelings subconsciously, possibly, made Harvey realize what was going on. 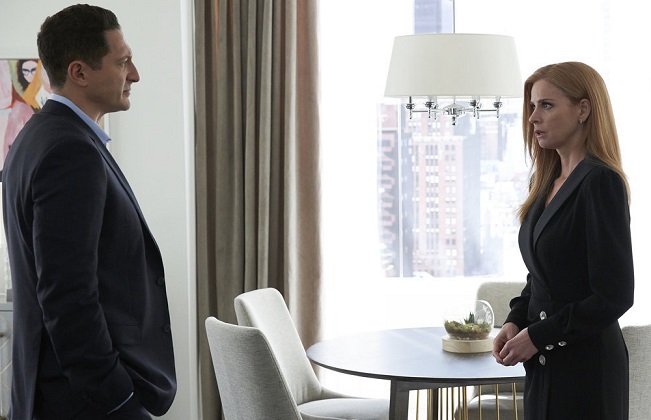 TVLINE | Are Donna and Thomas broken up or still together by the end of the episode? After they have that conversation, we don’t really see what happens between them.
We cut the scene where Thomas and Donna break up. The director had cut it. I wasn’t sure whether we should keep it or not keep it. Turns out I never even watched it, because whenever anybody watched the episode without the scene in it, they said they did not miss it. And it allowed us to have something to deal with in [Episode] 901 and Season 9, in general. … Obviously, in Donna’s mind, the second Harvey comes to the door, she was broken up with Thomas. And you could make the case that she was broken up with Thomas in her mind before that. But I had written a scene where they break up because I wanted to relieve Donna of the burden of being a person that would do that. But the truth of the matter is she had a very frank and open discussion with Thomas about how she feels. It’s a little messy, but I think it’s OK.

TVLINE | How will this development between Harvey and Donna shape the final season? Have you started to get into the work of that yet?
We’re really just writing [Episode] 901 as we speak. We’re going to follow their growth. If you want to say they’ve had these feelings that they repressed or were unable to communicate for all these years, [then Donna and Harvey are] not the world’s best communicators with each other, and they’re going to have to learn how to do that. When you’re in a relationship with someone, learning how to communicate with them is probably the most important key to success. They’re going to have to learn how to handle their issues in a relationship the way people do, the way couples do, and we’re going to see that. It’s not going to be the highlight of every single episode, but I would say it will be there in pretty much every episode. We’re going to explore how they handle this newfound relationship.

TVLINE | There were a couple hints in the finale of something potentially happening between Harvey and Samantha. Robert made a comment to her, and then Harvey came to her. Were those just red herrings? Or is there a potential romance and/or love triangle brewing?
They were red herrings. … It’s possible those feelings were brewing or would have brewed in Samantha, but they were red herrings designed to make people furious at me — “How could I dare possibly contemplate putting Harvey and Samantha together?!” — to throw people off the scent of what was coming.

TVLINE | There was a moment, before Donna opened the door, that I thought someone really unexpected was going to be behind it. I don’t know who I was thinking of, but I was expecting something wild and crazy, so you got me.
[Laughs] My hope is that when Harvey’s running to her, you’re thinking, “Oh, my God, is it finally going to happen?! Is this going to be when it happens?” That was my goal with that. A lot of times at the end of the year, we write these things so close to when we’re going to shoot them and so close to the table read that the cast is reading it for the first time at the table read. The way Katherine Heigl came to be an actress on Suits is, first and foremost, she was a huge fan of Suits, and she wanted to be on the show. So we’re in the middle of this table read, and she had not read the script. We only finished it, I think, the night before. So she’s reading it and she realizes all of a sudden what’s happening, what Harvey’s going to do, and she gasped. She couldn’t believe it. She was having the live reaction that I wanted people to have when they watch the show, ultimately, and it was so satisfying. She’s such a fan. It’s awesome to have an actress who is a part of the show and an amazing character on the show and also just a fan of the show.

Suits fans, what did you think of the twist? Grade the finale below, then hit the comments!