Lauren German knows the exact question that has been on many a Lucifer fan’s mind ever since Chloe saw her partner’s true face:

“Is knowing he’s the Devil going to be a roadblock to them going to Bonetown?”

Yes, German’s many skills include an ability to cut the chase after TVLine clumsily tried to phrase that question more delicately (the word “consummation” may have been used). And as for the answer…? We’ll get to that in a bit. Suffice to say, Season 4 of the supernatural-tinged procedural (all 10 episodes arrive on Netflix Wednesday, May 8) will make clear from that start that Chloe’s reaction has been a… multi-layered one.

“When I did press at the start of the break, I was asked what I thought Chloe’s reaction might be, and it is pretty much in line with what I guessed,” German shared during TVLine’s visit to Bing Crosby’s former Toluca Lake mansion, where in early December they were filming the finale. “I guessed that she would support him and love him, but be a little scared. She is, I think, in love with him, but just in denial” about what she has seen.

German is quick to acknowledge that yes, Lucifer has repeatedly claimed to be the Devil over the years, “but seeing what he is and opening up that Pandora’s Box is terrifying to her. And yet there’s also some relief, because it seemed like Chloe was looking for the truth all along, always asking, ‘What is up with you? What’s your deal?'”

Chloe’s on-the-spot reaction to the Devil face is one that we don’t get to see, for reasons explained in the premiere’s cold open. “When I first read our first episode, I was like, ‘Oh my gosh, I wonder how people will react to this?'” series lead Tom Ellis recalled during a break in filming. “I sensed that everyone wants to know exactly what happens in the moment straight after, and we don’t pick it up there. We pick it up a month later, and I’m glad we did that because—”

Uh, Ellis started getting a bit too spoilery there. But fans could find some solace in the fact that the first time we do see the partners in crimesolving together in Season 4, Chloe is assuring Lucifer that everything is fine “and she’s dealt with it.” Lucifer in turn “goes along with it, but he’s got a niggle that something’s not quite right…,” said Ellis. 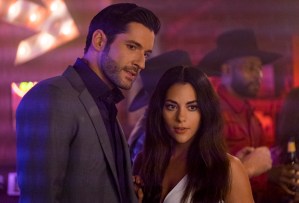 Further complicating Lucifer’s life is the intrusion upon it by Father Kinley (Preacher‘s Graham McTavish), an investigator for the Vatican who “very much has an axe to grind,” obsessed as he is with a prophecy about “the Devil walking the Earth and finding his first love,” said Ellis. “Graham is a friend of mine, so when we got him I was delighted,” Ellis enthused, before teasing: “What happens in the first few episodes with Graham’s character is not where we finish it.” Hmm.

Also new for Season 4 is Inbar Lavi (Imposters) as Eve aka  Earth’s first lady, who sneaked out of Heaven after growing bored with her marriage to humdrum Adam. “Inbar plays Eve so uniquely and well,” German raved. “She brings a whole new vibe to the show — this very ethereal, light, kind of sensual energy. It’s spot-on and it f–king works.”

Eve reminding Lucifer of his slithery ways sets the stage for what Ellis says is “a more Jekyll-and-Hyde Lucifer than we’ve ever seen before,” especially in the wake of him enthusiastically slaying Cain. “It was almost like a predator who smelled blood again.” 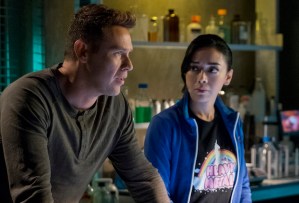 Lucifer is not the only character who will feel pulled in different directions this season. Sweet-natured, hug-happy Ella (Aimee Garcia) enters “a bit of a spiral” following the deaths of Pierce and Charlotte, whom she knew to be “a dreamy guy” and “a hard-nosed professional woman.” Said Garcia, “Ella’s no stranger to a rough life, but she really sees the best in people and believes there is karmic justice in the world. She believes that love begets love.” But after the sum total of these tragedies, “instead of lashing out, she kind of self-destructs” and succumbs to a world of “sex, drugs and rock-n-roll…. Even her t-shirts get a little darker.

“It’s hashtag #fun, hashtag #AimeesGoingToBareAll,” Garcia added with a laugh. In addition to being among those who flash some Netflix-friendly skin, “I get to make out with guys and girls.” 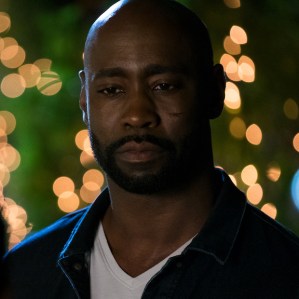 Similarly, Dan (Kevin Alejandro) will find his grieving of Charlotte (and his placing of some blame at Lucifer’s feet) steer him back into morally grey areas, crossing some lines as a lawman, while Amenadiel’s (D.B. Woodside) return to the Silver City has proven oddly dissatisfying. “He got exactly what he wanted — his wings grew back and he returned to Heaven. So why does he feel like he’s missing something?” asks co-showrunner Ildy Modrovich. “And what happens to him early in Season 4 that makes him reevaluate where he belongs in the world?” And though Lucifer isn’t directly involved in his brother’s latest travails (nor vice versa), “At the very important times, their kinship is drawn upon,” Ellis noted. “They become big allies in the last couple of episodes.”

Elsewhere in Lucifer’s orbit, Dr. Linda (Rachael Harris) will help a new patient “through a trauma when they need it most — and that character, in turn, will be there when Linda’s dealing with a huge life emergency of her own,” says co-showrunner Joe Henderson. Maze, meanwhile, will 1) try to patch things up with tweenage Trixie, 2) reconsider her living situation in light of the new Lucifer/Chloe dynamic, and 3), in a “big, very cool” Episode 9, find that elusive thing called love. That is all in addition to, of course, at least two major fight sequences. (“If it was me, I’d be fighting everybody,” Lesley-Ann Brandt said with a grin. “But that’s a different show!”)

But wait, there’s more. A whole lot more, that isn’t even hinted at above. (Oops, did we not mention Remiel? Or the bubble-wrapped ceiling fan?) And it all builds to a Season 4 finale that is “f–king dark,” Rachael Harris confided. But maybe it also leads to, you know, “Bonetown”…?

“All jokes aside,” German said, “people come along in your life and you don’t know why you love them, but you do. And I think that is what she has with Lucifer. So yeah, I fully think she would go to Bonetown. Because she’s madly in love with him.”