HIGH POINTS | Choosing to follow Daenerys instead of her terrible brother, Viserys; stopping Daenerys from drinking poisoned wine; volunteering to be Daenerys’ champion in Meereen; capturing Tyrion; winning a fight that was heavily stacked against him in a Meereenese pit and saving Daenerys from being murdered by one of the Sons of the Harpy; getting back in Daenerys’ good graces; being cured of greyscale; reuniting with Daenery at Dragonstone; receiving Hartsbane from Samwell Tarly before the Battle of Winterfell 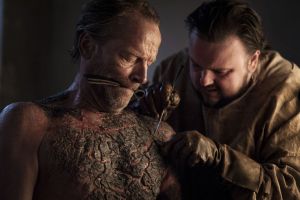 LOW POINTS | Spying on Daenerys for Robert Baratheon; realizing that his romantic love for Daenerys is not reciprocated; engaging in an ongoing pissing match for Dany’s attention with Barristan Selmy; watching Daenerys fall for Daario Naharis; being banished by Daenerys after she learned he once spied on her; getting greyscale; nearly dying during an excursion beyond The Wall

CAUSE OF DEATH | Stabbed by a wight during the Battle of Winterfell, after bravely protecting Daenerys from the army of undead

EPITAPH | Though he was a traitor when we met him, Jorah turned out to have one of the most loyal hearts in Westeros and beyond. Daenerys couldn’t have asked for a wiser advisor or a steadier presence (and girl, you should’ve ridden that dragon when you had the chance!).

Now it’s your turn. Hit the comments with your favorite Jorah moments over the years, and then tell us which Game of Thrones character you fear/hope will fall next!