Now that American Gods has put Cairo in its rearview mirror, it’s time to discuss that huge reveal in the Season 2 finale.

No, we’re not talking about Bilquis and Shadow’s clothing-optional scene near the end of the episode (though we’ll have more on that from the love goddess herself, Yetide Badaki, in a moment).

We mean the revelation that Mr. Wednesday, aka the Old God Odin, is Shadow Moon’s father. Those who’ve read Neil Gaiman’s novel on which the Starz series is based have known this for a while, of course. But for the rest of the show’s viewers, this is a big, divine deal. 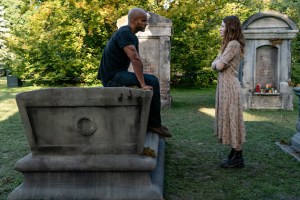 The episode opens with a reenactment of Orson Welles’ War of the Worlds 1938 radio broadcast and segues into Mr. World talking about how fear drives so much of what people believe. After all, he intones, “If it’s real in your mind, it’s real in the world.” Soon after, we watch Wednesday scurry away from the funeral home just before Laura arrives there. Shadow, still reeling after killing Mad Sweeney, tells her the leprechaun died. She apologizes for everything that she’s done, but he brushes it off, and then she announces her plan to kill Wednesday. She asks if he’ll try to stop her. “Free country,” he replies listlessly.

Not long after, the Xie Comm CEO somehow resurrects Technical Boy, who repays him by transferring a massive amount of digital information to Mr. World’s headquarters. Soon after, TV newscasters — with a little goosing from New Media — begin reporting on massive data dumps and security breaches, settling loose a galloping fear that overtakes the American public. Runs on banks, long lines for gas, the whole deal. And then news reports begin showing photos of Shadow, Wednesday and the rest of the gang, identifying them as the perpetrators of the “Bellefontaine massacre” and claiming that America is under attack. 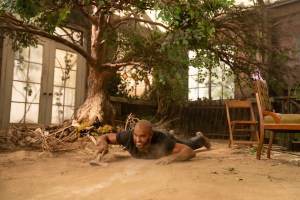 As the police start to close in and Salim freaks out, Shadow prepares to run. Bilquis is waiting in his room. She loses all her clothes, kisses him (“You taste of love lost”) and informs him that their fortunes are linked. Then she’s gone, suddenly. Shadow eventually tries to leave through the greenhouse, but the mystical tree won’t let him. In a trippy sequence, its roots drag him in, and Shadow has the revelation that Wednesday is actually his father. So he begins hacking at the tree with an axe.

Later, Mr. Nancy sees that the tree is gone, and so is Shadow. “Now we’re talking,” the Old God says. The Jinn and Salim ride off together. Laura carries Mad Sweeney’s corpse down the street. Elsewhere, Mr. World revels in the chaos he’s created, and Wednesday sits in a restaurant and remarks to himself, “My boy’s gonna be just fine.” 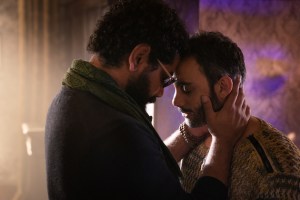 The next time we see Shadow, he’s on a bus that’s getting pulled over by police. But after he shows them his ID, expecting them to arrest him, they merely bid him goodnight. That’s when he realizes that his license now identifies him as “Mike Ainsel.” Confused and tired, he gets back on the bus and closes his eyes.

Read on as we talk to Badaki about closing the show’s Cairo chapter and more.

TVLINE | We’ve often talked about what Bilquis has had to do to survive. What survival skills do you think she picked up this season?
I think the most useful thing for Bilquis is something I’ve been saying from the beginning of the season. When we ended Season 1, there were signs that they needed to get themselves a queen. This season Bilquis remembered that she is, in fact, a queen. You have two very divisive sides and they both making cases for why you should join them, but they’re both ultimately speaking of war and they’re ultimately speaking of an ending that’s not great for many. What I love that we get to see in Bilquis’ journey is that she hears what these individuals are offering and she starts to carve her own path. She says, “Thank you very much,” and she starts to move in a different way that neither of the sides could’ve seen… You rarely really show where she stands and there are so much possibility for where she can go.

TVLINE | On the flip side, what do you think she’s cast off this season? What no longer serves her?
She casts off being small. She really starts to step into her full goddess and the power that’s there and the possibilities that are there.

TVLINE | Speaking of casting things off, what was your initial take on that Shadow-Bilquis scene in this episode?
[Laughs] That’s interesting. Actually, you’re probably the first to hear this, but the nudity wasn’t there at first.

TVLINE | Oh, really?
I asked for that. Part of that reason was we’re seeing Bilquis becoming more and more powerful throughout the season. I was very wary of a corollary being made between a woman being powerful and her removing herself from her body and her sexuality. I did not want the message to end up being, “Well, she’s now getting more powerful and successful, and so she will no longer connect with her body.” I was very worried about that message being sent. She is still in ownership of it. It’s still a very powerful part of her and I actually find it interesting in this moment that people are readying for war where you may see a lot of other individuals’ armor up, she in approaching conflict that gets as intimate and vulnerable as can be and her power still resides within her. 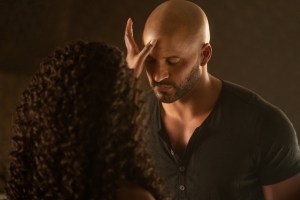 TVLINE | I would’ve been like, “Let’s put her in a power suit” or something, and you’re like, “Let me just take off everything.”
[Laughs] For me there’s a lot of strength in that. She’s in there, in herself, in her power in all ways. I also did appreciate though that I had to ask for it and that people were very careful around it. Again, it goes back to agency. I have no issue with nudity. However, I do have issue with removing a woman’s choice within it. Whether it’s to put on more clothes or to take off some, it should always just be the woman’s choice and in this case, it got to be my choice.

TVLINE | Right before Bilquis disappears, she says something about her and Shadow’s fortunes being linked. Does she have any hand in his evading police capture at the end of the episode? We even say it in there that she has an absolute interest in his well being. This is Shadow’s journey. We’re all experiencing this through him, and all of the gods are very interested in him, but we’re seeing this from the first episode where she gets her fortune and she is immediately struck by something in regards to Shadow. And even going to Cairo, she goes for Shadow. There’s been a continuous connection between the two. We’re not sharing yet, as we love to do in this show, but the moment before you see her disappear in the last episode, it’s a catalyst moment for Shadow. She says, remember who you are, and we do see him go through a major realization through the episode.

So to answer your question, there is a connection. She does have a vested interest in him, and I think there are many moments where she is very protective of him and that those moments extend further than whether she’s there at the moment or not.

Now it’s your turn. Grade the finale and season overall via the polls below, then hit the comments with to expand upon your thoughts!