If you think you’re having trouble wrapping your brain around Dynasty‘s latest twist — that Elizabeth Gillies is now playing both Fallon and Alexis via the magic of prosthetics — try being the guy who has to play both Gillies’ father and ex-husband.

“Grant Show couldn’t even look at me, and we only had one scene together!” Gillies tells TVLine about tonight’s episode (The CW, 8/7c), which formally introduces Alexis 2.0 in all her glory. “I was sitting on the couch with him, and I realized he was being incredibly squirmy and uncomfortable. It was probably my favorite of all the scenes I shot [as Alexis]. He’s so funny and earnest in his performance, because he really is so uncomfortable. It works perfectly, and I just loved it.”

Below, Gillies and showrunner Sallie Patrick discuss the process of giving new life to an iconic character, including how long we can expect this recast to stick…

TVLINE | Let’s start at the beginning: When you realized that you were losing Nicollette Sheridan, was it a no-brainer for Liz to take over the role? Or did you weigh other options?
PATRICK | It wasn’t a no-brainer. It was actually quite sudden, the news of Nicollette’s departure. Part of the beauty-slash-challenge of having a 22-episode season is being nimble and being able to adjust quickly. In the spirit of the OG Dynasty, we just went for the biggest twist possible as an homage to the double castings and doppelgängers they had on the original series.

TVLINE | Did you consider bringing in a new actress, or was there just no time?
PATRICK | We didn’t want to compromise the integrity of the casting process. We have an amazing cast and wanted to add someone of their caliber to that role. We wanted to take our time with that. This is a momentary storyline to fill the gap.

TVLINE | Liz, how did you react when this was first brought to you?
GILLIES | I thought it was pretty wild. I’ve always loved the character of Alexis, even from the original Dynasty. I’m a huge Joan Collins fan, and what Nicollette did with the role was wonderful. She made it her own, and she developed such a following with her version of Alexis. When they presented it to me, I thought it was crazy, but I love a challenge — and it felt like a big one to me. Whatever I did, I was really paying tribute to the character that Nicollette built and carrying on the storyline that she had taken on so far. I did my best to embody everything she built with the character. The scenes with myself were wild. A lot was wild. It was pretty exciting. I was flattered they asked me, and I hope that once the fans see more, they’ll embrace it. It’s all in good fun.

TVLINE | What was you process for getting into that character? Did you go back and study previous episodes?
GILLIES | I love studying people, and I do it even when I’m just working with them. When I tell stories about people, I tend to fall into their voice and mannerisms. I’ve done characters and impersonations since I was a kid. So I didn’t have to study her, really. She has a very specific cadence in her speech, a way of talking that took a minute for me to make sure it was right.

TVLINE | Has she weighed in with her thoughts on the casting?
GILLIES | I don’t think so. I hope she likes it. I really tried to do my absolute best. I did my very best to make the fans proud and her proud, so hopefully it pays off.

TVLINE | You had me the moment you blew that kiss to Adam.
PATRICK | That was a Liz Gillies improv moment, just so you know.
GILLIES | Well, Sam Underwood actually blew me a kiss first off camera. So I just blew him one back. I love him.

TVLINE | Speaking of Adam, is Alexis not even mad at him anymore, since she got this great new face out of the deal?
PATRICK | Well, we don’t want to give away spoilers, but you’ll see that she has a lot of feelings about the transformation. That is what’s implied at the end of the episode. She’s been through a lot, so it’s quite an unexpected surprise to look so good. 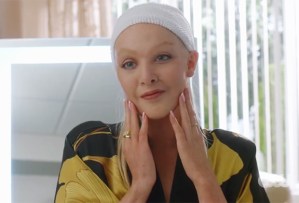 TVLINE | And how long does it take to make you look like Alexis?
GILLIES | I had to get a life cast done, and I’m a little anxious and claustrophobic, so I was worried how I would do with that. They make a mold of your face and you have to breathe through your nose for an hour and a half. The prosthetics we ended up going with were incredibly thin and very impressive; it was done by Blue Whale Studios, run by Matthew Silva and Jonah Levy. It took five hours to get into them and about 45 minutes to get out. I started to get used to it, though. It became like a very calming face mask towards the end of it. I would sometimes fall asleep, which was very strange. It was oddly therapeutic. And I knew it was worth it. The detail they went into — you’ll see they painted my chest, my arms, my hands. I’ve never done anything like that.
PATRICK | It gives a really uncanny effect, especially when Fallon is playing scenes with her mother.

TVLINE | Yeah, let’s talk about those scenes. How surreal was it playing opposite yourself?
GILLIES | Whichever character’s scenes we shot first, I had to figure out what I was going to do on the other end right there on the spot. I had to instruct my double on what I would do in the future while I shot the other side. It was very strange for me. I’m not a spontaneous actress, but I like to change things up and make each take fresh, make a lot of different choices. But you don’t have the opportunity to do that as much when you’re working like this. Once I saw it all together, though, it was mind-blowing. It was strange to see me touching and hugging and crying with myself.

TVLINE | The show has been renewed for a third season, so could you see yourself pulling double duty for the long haul? It seems like a lot of work.
PATRICK | I’ll speak for Liz. She certainly has the talent to balance the two, but production-wise, it’s challenging.
GILLIES | [Laughs] It was a little exhausting. It was also came later in the season. Like, we were wrapping up the season post-Christmas break, then things suddenly got very exciting very quickly. Maybe in another form it could come back, but yes, it is temporary. I would do it again, though, absolutely. I really, really liked it.

Your thoughts on Dynasty‘s most Dynasty move yet? Drink in our exclusive first look at Gillies’ Alexis above, then drop a comment below.