Beyond that, I guessed that Blake Shelton would use his Steal on Abby if Kelly Clarkson hadn’t already Saved her (and The Bundys if she had), John Legend would use his Save on Beth, and Kelly would use hers on Abby. But was I anywhere near right? After a bare, intimate performance of “Grow Young,” which Season 14 winner Brynn Cartelli referred to as “her most vulnerable song yet,” we found out… 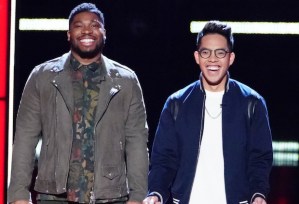 LB Crew (Team Adam) vs. Jej Vinson (Team Kelly)
Saved by America’s Vote | Jej Vinson
Eliminated | LB Crew… nooo! He was so present, so passionate! Damn. I mean, I kinda thought the vote would go to Jej, but still… nooo!

So, were you surprised by any of the Cross Battle winners/losers? By the contestants the coaches chose to keep? Vote for the eliminated singer(s) you’ll miss most below, then hit the comments.