With five of the eight available Steals/Saves already used, the contestants relegated to Night 2 of The Voice’s Live Cross Battles really had to bring it… that, or bring a bag for their trips home. But, based on the sound and pitch problems — so many pitch problems! — that were on display a week prior, I wasn’t terribly optimistic. Which singers rose to the occasion, and which sounded like they’d be among the unlucky five eliminated Tuesday? Read on… 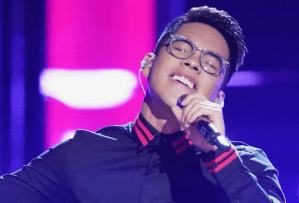 Team Adam’s LB Crew performing “Wade in the Water” (Grade: B+) took on Team Kelly’s Jej Vinson performing “Versace On the Floor” (Grade: B) | Admitting that viewers were probably sick of him challenging Blake over and over again, Adam finally threw down the gauntlet in front of someone else: Kelly. Up first, LB began his performance with a vocal that was as low as it was gorgeous. (Even foghorns had to be jealous of that lower register!) And for the most part, his rendition of “Wade in the Water” was as smooth as a freshly paved road. There were instances here and there where I thought he’d gone a smidgen flat, but even if he had, I’d forgotten all about it when he really let loose and went raucous with his vocals. Taking the stage next, Jej covered Bruno Mars with great competence. Which is to say, vocally, he was quite good. His voice is so pure and undiluted. But he just didn’t have the swagger to pull off “Versace On the Floor.” So in the end, he gave us a performance that was technically fine but not compelling.

Team Adam’s Kalvin Jarvis performing “New Rules” (Grade: B-) took on Team Legend’s Julian King performing “Hello” (Grade: C) | Again forgoing the predictable Blake challenge, Adam challenged John, who put in the very artist he’d used his Block on Adam for during the Blinds. Singing first, Kalvin really impressed me. His performance was the opposite of, say, Jej’s — it wasn’t technically perfect at all. It was probably even a little sloppy. Or maybe it was just loose and on the border of sloppy. Either way, he unleashed his cover with a rawness and a passion that made me believe he was feeling every word that he sang. And if I have a choice between flawless and dull, and flawed but gripping, I’m going to go for flawed but gripping every time. Following Kalvin into the spotlight, Julian started off OK but got pitchy when he went for his big note in the chorus. And though ultimately he demonstrated that he has good range, I wasn’t convinced that he entirely knew what to do with that range. It was like it was greater than his ability to control it. Not sold. 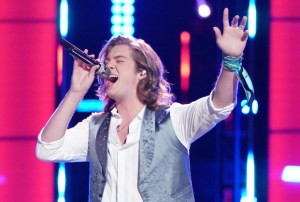 Team Blake’s Carter Lloyd Horne performing “Way Down We Go” (Grade: B) took on Team Legend’s Jacob Maxwell performing “You’re Still the One” (Grade: C-) | I had high hopes for Carter after his awesome Blind; less high hopes after his disappointing Battle. Had the Blind been a fluke, I wondered, or had the Battle been one off night (and a terrible song choice)? As he started, to my relief, it appeared that the Battle had been one off night. Again, he sang with a voice that sounded so beat-up and lived-in, I’d have believed it came out of someone twice (even thrice) his age. There were pitch problems here and there, and Carter probably doesn’t have the biggest range in the world. But this was solid as a brick wall. When it was Jacob’s turn, I’ll admit I had a moment of panic, remembering his horrible Police duet in the Battles. This wasn’t nearly that bad. However, it ultimately fell flatter than a crepe that’s been run over by a steamroller. Partly, that was probably due to the Shania Twain ballad being the absolute wrong song for him to cover; partly, due to the fact that some things, not even great bone structure can compensate for.

Team Kelly’s The Bundys performing “The Letter” (Grade: C) took on Team Blake’s Andrew Sevener performing “Modern-Day Bonnie & Clyde” (Grade: B-) | Since The Bundys are a trio, I kinda wanted them to be three times as good as any of the solo acts competing in Season 16. That sounds unfair, but then again, it feels unfair to me that a threesome can go up against an individual. Anyway, they sounded OK but not earth-shattering, and definitely were at their best when they were doing the harmonies that only a group could do. Their solo bits were so-so, and the second Bundy sister to sing by herself had so much trouble, I think I docked them a whole letter grade for her section. When Andrew hit the stage, he immediately made me lean forward and take notice. There was an authenticity to his raspy, imperfect voice, and a sense of fun to his performance, that I just loved. Blake said that Andrew had looked like he was strolling all over the stage “looking for some change you dropped.” I thought he looked like a guy who was gonna be safe Tuesday. 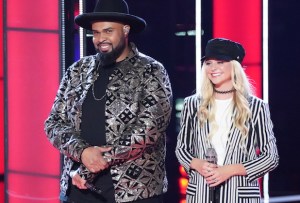 Team Legend’s Shaun Sounds performing “Lay Me Down” (Grade: A-) took on Team Blake’s Karly Moreno performing “Down” (Grade: D) | Up first, Shaun literally sparkled as he sang — and not just because of his bedazzled jacket, either. The guy is just made to perform. He has a voice as big as the auditorium, an astounding ability to keep a hold of that massive voice, and the presence of a born showman. By the time he was done, I felt bad for Karly. She’s cool and different — kinda Gwen Stefani, really. But I didn’t think she had a snowball’s chance in hell against the beast of a performance Shaun had just delivered. Maybe she thought the same. Though she smiled through her performance, I felt like she seemed kinda deflated, defeated. And she definitely sounded like she was going to be on the losing end of this Cross Battle. So. Many. Pitch. Problems. Yikes. I suspect Tuesday will be her last appearance on the show. Blake said that this had been her best performance ever. With all due respect, no, Blake. Just no.

Team Adam’s Kendra Checketts performing “Cold Water” (Grade: C) took on Team Legend’s Jimmy Mowery performing “Mercy” (Grade: C-) | A one-woman Evanescence, Kendra began her performance singing with a clarity that was stunning. Unfortunately, she ran off the rails when she went into her lower register, and she never quite recovered. She hit some nice, big notes now and then, but once she lost her handle on her pitch, what could’ve been a terrific performance was just at best OK. Following Kendra onto the stage, Jimmy should’ve seen this as his Cross Battle to lose. And I wasn’t sure by the time he was done if he hadn’t actually lost it. He had a lot of energy (good) but at the expense of his vocal (not good). So the impression that he left us with was that we’d been yelled at for a couple of minutes, and not always on pitch. In the end, there was more about Kendra’s performance that worked than there was about Jimmy’s.

Team Kelly’s Rebecca Howell performing “Any Man of Mine” (Grade: B+) took on Team Legend’s Beth Griffith-Manley performing “I Put a Spell On You” (Grade: A-) | As we got down to just a few singers left, I couldn’t help but wonder how it feels to be last picked from your team. Are you flattered, because your coach wanted to save the best for last, or bummed because he/she didn’t think to put you in sooner? Anyway, Rebecca sounded for the most part like her voice could’ve been coming pre-mixed from the radio. There were some slight pitch issues, but they were few and far between. Overall, she sounded confident and powerful enough to put the “Grand” in Grand Ole Opry. Next up, Beth gave her cover of “I Put a Spell On You” a dramatic, James Bond-theme spin. At first, I was like, “OK, this is nice. Maybe a little overstylized but nice.” But then, she just totally cut loose, allowing her voice to shred nine ways to Sunday. Forget the Bond theme-ness of her arrangement, she herself brought the drama and a boatload of it. It was like, “Damn!” and then “Damn!” all over again. Great Cross Battle.

Team Blake’s Gyth Rigdon performing “Goodbye Time” (Grade: B) took on Team Kelly’s Abby Kasch performing “Cupid’s Got a Shotgun” (Grade: B-) | Before these two sang, I assumed that Gyth had the edge, if only because what I mostly remembered about Abby was that, despite a super pitchy performance in the Battles, Kelly had dumped Jackson Marlow for her. On stage, Gyth freakin’ slayed. The verse was a little overwrought for my taste, but he nailed the big choruses, especially the first one. He might as well have been singing “Goodbye Time” to Abby. Speaking of whom… when she stepped up to the mic, she gave a ferocious, energetic performance that made me rethink my initial impression of her. She definitely doesn’t have the show’s most polished voice, and veered in and out of pitch quite a bit. But there was an “I will not be denied!” oomph to her go-for-broke performance that made this a closer-than-expected Cross Battle to call.

So, who do you think will be sent packing Tuesday? Who stood out for you Monday? Vote in the poll below, then hit the comments.