The first season of Roswell, New Mexico reached its explosive conclusion on Tuesday with a cliffhanger that took life-and-death stakes to dizzying new heights.

But before we break down the episode’s biggest surprises with executive producer Carina Adly MacKenzie, let’s do a quick recap: Embracing his inner “savior,” Max used his newfound powers to defeat Noah, a victory he and Liz celebrated with some long-overdue sex. Unbeknownst to either of them, Isobel and Michael had just discovered Rosa’s corpse in a pod in Noah’s cave, something they decided not to tell Liz about. But because Max was still in hero mode, he used his alien powers to revive her, apparently sacrificing his own life in the process. (Oh, and did I mention that we found out Rosa is actually a Valenti?)

Speaking of the Valenti family, Kyle let himself go to a dark place, nearly buying a gun to seek revenge on Jesse Manes. In the end, though, a bulletproof vest and a blunt object were all he needed to knock Alex’s father unconscious before putting him in a medically induced coma. And after reuniting with Michael’s lips, Maria made a disturbing discovery of her own when she noticed that his hand mysteriously healed.

Below, MacKenzie discusses the episode’s biggest game changers, and how they could potentially set the stage for a dramatically different second season. (UPDATE: Roswell is renewed for Season 2.)

TVLINE | Let’s start with that Dido cover. I feel like you can only use that song once in the series, so what about this moment made it the perfect time?
This was the plan from the very beginning. When the show got announced, the first thing people started tweeting at me was “I’m not watching this unless you use Dido.” I don’t have enough time to have a theme song on the show. I don’t want to have a minute-long credit sequence, because that minute is so precious to me. There are episodes where I would have killed for 15 more seconds. For this moment, we talked about Michael finding peace in music, and it just felt like the right way to honor everything that came before while putting our own spin on it. That cover was done specifically for us, and I really liked the idea of this slow beautiful song playing as things are ramping up towards the very end of the show.

TVLINE | Well, I’m glad that Liz has her sister back, but how is Rosa handling this? What’s going on in her head right now?
Rosa thinks she just woke up from a bad hangover, and she’s about to be very confused. There’s a line I really like that she says while they’re hugging: “I’m here, it’s OK.” Even in her confusion and fear, her instinct is to comfort Liz. If we get a Season 2, we’ll literally pick up moments after this. Things will start to click for her, like how Liz looks a little different, and she’ll have to learn to adapt.

TVLINE | The flip side is that we lost Max. What can you say about his fate?
I can say that we actually told the audience this was going to happen in Episode 2, when he said the guy with the healing hands tends to die bloody in the great stories of religion. Max’s story definitely isn’t over, but there are consequences for raising somebody from the dead. We can’t just have this guy on the show who’s capable of doing that. There would be no stakes.

TVLINE | I have to say, I was a little disturbed by Kyle’s darker turn this week. Are we saying goodbye to the Kyle we knew and loved?
I was so proud of Michael Trevino in that scene, which we shot in a real gun store in a mall in Santa Fe. That scene was actually the most important one in the whole episode. We knew we were running long, so we didn’t have enough time to shoot everything we wanted, and people kept suggesting that we cut that scene. I just sort of said, “Hey, listen, we’re done suggesting that we cut that scene. Suggest something else.” There are a lot of guns on the show, a lot of casual-seeming gun fights, because we’re talking about cowboys and cops in New Mexico. I wanted to say something about how easy it is to get your hands on a gun in New Mexico when you’re clearly in a state of distress. 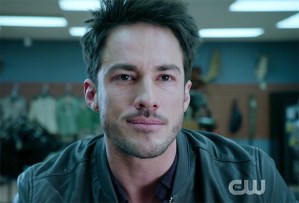 I’ve been watching Michael Trevino work for a decade now, and I love challenging him. He’s always game, and it was really fun watching him do something I’ve never seen him do before. The “do no harm” Kyle who was trying to live by his father’s moral code has now seen that code fall apart. Doing the bare minimum isn’t working for him. He’s not happy. He’s gone from being at the top of his game to now feeling like he’s lost everything. He’s definitely going to have to reconcile with his choices, but I don’t think anybody was sad to see Jesse Manes get his ass kicked a little. Kyle’s not going to be a villain, though. I’m always going to be on that guy’s side.

TVLINE | And Maria seemed intrigued by Michael’s mysterious healing hand. Is this the beginning of her own journey of discovery?
If I have one regret about this season it’s that, in an effort to do things differently from the original show and to keep the secret from at least somebody on our playing board, we accidentally sidelined Maria’s story a little bit. My intention was for it to be a very slow burn, and then we sort of reduced her to something less than she had the potential to be. Maria’s going to be a much bigger player in Season 2. Heather Hemmens is a magical gem to work with, and we’re going to give her more to play with. We’re going to look into her family and the necklace she wears and what that all might mean. That said, Maria’s someone who wants to believe in miracles, so her first instinct isn’t going to be, “Your hand healed? You’re definitely from outer space.” But it’s definitely a bump in the road for her crush on Michael.

TVLINE | Speaking of Michael, did you feel any pressure from fans to keep him with Alex for the sake of not losing another same-sex relationship on TV?
Yes, but this isn’t the end of that story. If the show ends at Season 1, it ends at Season 1, but I wasn’t ready to end it with everything in a neat little package. For as long as this show exists, the story of Michael and Alex exists — and it’s not over. I consulted with a lot of advocacy groups, we’ve got a lot of queer people on our staff who I talked to about this. You don’t want to stereotype the bisexual person and make them someone who can’t decide between two genders, or make them the person who needs to be with a man and a woman to be fulfilled, because that’s not the story we’re telling. 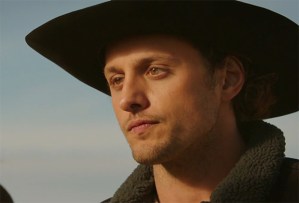 I also wanted to represent the fact that people can seek different kinds of relationships in their lives. Michael’s decision at the end of the episode isn’t about Maria being a woman. It’s just a choice that feels a little bit easy right now in a way he feels he needs. This guy just went through absolute epic trauma, and he wants to go back to this place where he’s just hooking up with people — not caught up in this incredibly fraught, powerful, painful love story. We grew up watching love triangles on TV and this is one that I hadn’t seen before. I wanted to make Michael the Joey Potter, the Rory Gilmore, the guy who’s in the center. He’s my favorite character, and I want him to be in the middle of things. … I think to suggest that Michael and Maria are together now isn’t the intention. Like she said, they have a lot to talk about. And Alex is very much a factor for both of them. He’s just had a really, really bad day and he needed a little but of a reprieve from the weight of what he was going through.

How did you feel about Roswell, New Mexico‘s first finale? What are your hopes for a potential second season? Grade the episode in our poll below, then drop a comment with your review.