The Village‘s Gabe wasn’t looking for a new love interest when he opened a dingy law office door and ran right into the “kinda judgy” Sofia Lopez. But, series star Daren Kagasoff says with a shrug, here we are.

“He sees this is a young woman who’s a lawyer, who’s an actual lawyer, and that’s something he’d like to be some day,” the actor says during a visit to TVLine’s offices. “He’s taken aback because she’s so smart. She has her life put together, and he really has to ask her for help with this case, because he has nobody else to go to.” 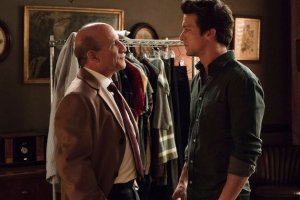 If you’re behind on NBC’s newest ensemble drama, allow us to catch you up: Kagasoff’s character, Gabe, is a law student with a disapproving but highly successful lawyer dad. Gabe has agreed to help Ava, one of his neighbors in a tight-knit Brooklyn apartment building, with her impending deportation hearing. Oh, and Gabe’s grandfather lives with him, which will become clearer when you watch the exclusive sneak peek above.

Kagasoff previews that in Tuesday’s episode (which will air in its new 8/7c time slot) we’ll see Sofia, played by guest star Aimee Carrero (Young & Hungry), warm to Gabe… in her fashion. “At first it’s a work relationship, and then, you know,” he says, smiling. “We might kiss.”

Their association may also spell the end for Gabe’s interest in following in his formidable father’s footsteps, Kagasoff adds.

“We don’t really know if he’s in it for the right reason — not Ava’s case, but pursuing a career as a lawyer,” he says. “Once he meets Sofia and he gets the understanding of how difficult and how hard this type of work is, and how invested you have to be in [your clients], we see: Is he cut out for this line of work?”

Let’s table that question for a moment to deal with one that’s been on our mind: Has there ever been an apartment building whose residents’ lives are as entwined as the people who live in The Village?

“It’s so funny, because my old apartment that I had before I moved here, it might have been 10 or 12 units, so a fairly small place, and I wouldn’t say we were friends, but it was a very friendly environment. We would see each other all the time in the hallways,” Kagasoff says, laughing. “I wouldn’t say, ‘Hey, let me babysit your kids!’ But you know… We were kind. Everybody was kind.”

So yes, The Village is about the incredibly empathetic people who fill a fictional abode, “but it would be amazing to see this more in life, because this is what we need,” Kagasoff says. “Everybody has their own lives that they have to do, but it feels good to help other people at the end of the day. It really does.”