We’ve known it for months, and now the fictional American people of the Madam Secretary-verse know it, too: Elizabeth McCord officially is running for president.

Sunday’s Season 5 finale found Téa Leoni’s Elizabeth resigning as head of the State Department in order to launch her White House run. The campaign to be Commander in Chief would be the focus of a potential Season 6, though CBS has not yet renewed the political drama.

“We feel pretty good” about getting another season, executive producer Lori McCreary tells TVLine. “I think, certainly, our audience is rabid about wanting to see this through. When we started this show, many moons ago, we had the expectation that in its success we would be where we are, and we could push her into a presidential campaign. So we’re doing a lot of deep thought about what that might look like. We have some exciting things planned.”

McCreary and executive producer Barbara Hall let us in on what some of those developments might be and broke down the finale’s major beats (is Owen Callister’s run really over?), ramifications for the future (did you pay attention to that political party talk last week?) and biggest overall surprise (Stevie kissed whom?!). Read on for the highlights.

TVLINE | We’ve reached kind of critical mass with where Elizabeth has been headed for the past few years. What comes next? Are we going to be focused mainly on her campaign? Will we be in the State Department at all?
HALL | What we’d love to do is get her on the campaign trail. We’d love to do a primary and an election next season. We’ve always been about pulling back the curtain on the State Department and showing the process of diplomacy, so this is going to be pulling back the curtain on a campaign and everything that that involves. 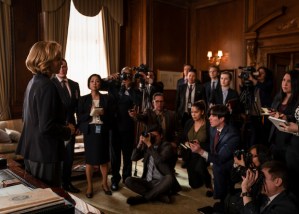 TVLINE | In the penultimate episode this season, the show addressed political party affiliation in a way that hasn’t been done before: After seasons of not putting a fine point on with which party the Dalton administration and Elizabeth identified, we now know she is not Republican. What made now the time that you felt that it was time to start addressing these party lines? Do we have a strict definition of what party Elizabeth is with?
HALL | We thought that if we were going to do an election year, we couldn’t really avoid addressing the party system. What we really wanted to do, since Elizabeth is an independent and that’s the party she’s running on, is that we wanted to name all the parties. I’ve always said the mission statement for the show is a place people can go to talk about politics that isn’t so polarizing. We wanted to come at our election from the point of view of you’re going to get to hear everybody’s policy differences and different platforms as elections work in a thriving democracy. The only thing that we ruled out of our world is extremism. So we just wanted to show a three-party election system, and in order to do that, we decided we had to identify the parties.
MCCREARY | I think it’s possible to actually have discourse on real-life polarizing issues. Some real discourse that helps people understand all sides of the issue, which is hard to find these days. The reason they’re polarizing is they’re not easy-to-answer problems. But one of the things I love about what we can do in the show is help unpack those issues for people, like we did last season with NATO, and look at some more domestic issues in a way that helps people really understand why there are “sides.”

TVLINE | Talk to me a little bit about Sen. Owen Callister. We see in the finale that he’s suspending his campaign,  but is there a possibility he will un-suspend next season?
MCCREARY | We haven’t dismissed it as a possibility. As we take on this approach to a campaign year, I want to feel like we can go wherever we need to go. It’s a whole different world, as I said. Again, with the three-party system, who knows what can happen? We’re not closing the door on anything.

TVLINE | The terrorist group Knights of Western Freedom don’t seem like they are going to go away, either. How much of a threat might they be as we move forward? How much they’re on Elizabeth’s mind as she leaves the State Department?
HALL | It will come back into the story, because we’re trying to address the global issue of nationalism, and I think that it’s going to be an issue for her in the campaign because it’s an issue in the world.
MCCREARY | The fun thing for our show can be, we know at a certain point the presidential candidates get read into some [national security intelligence] that they wouldn’t necessarily be read into, so she’ll be a little farther ahead that most of them… 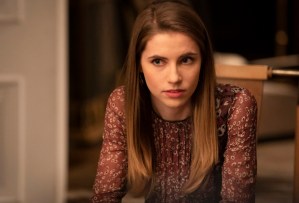 TVLINE | So to go from the very serious to the very frothy: Blake and Stevie’s pairing was something I did not see coming! Tell me about the decision to pursue a deeper relationship between those two.
HALL |  I think that’s the beginning of the deeper relationship, certainly a deeper friendship. I really feel like anything can happen. I feel like you’re going to be focused on interpersonal relationships in the campaign year because everybody’s going into these high pressure situations. It forces everyone to deepen their relationship, but we’ll see what happens with them. I feel like anything is possible.

What did you think of Madam Secretary‘s season finale? Grade the episode via the poll below, then hit the comments to back up your choice!