From here on out, the cuts were supposed to be coming fast and furious to The Voice. Tuesday’s Live Cross Battles Results Show had the potential to give the hook to a whopping eight contestants. But it turned out that Steals and Saves were what was really coming our way fast and furious. Only three singers ultimately got the hook. (Damn, it’s gotta suck to be among the contenders who’ll perform next week — so many Saves/Steals gone!)

Who were the unfortunate wannabes who were sent packing? After an understated, so-polished-you-could-see-your-refection-in-it performance of “Preach” by John Legend, we got our results…

Kim Cherry (Team Blake) vs. Betsy Ade (Team Kelly)
Saved by America’s Vote | Kim Cherry.
Stolen by Adam | Betsy Ade. After how badly she’d done Monday, I was surprised that both John and Adam Levine tried to steal her.

Matthew Johnson (Team Kelly) vs. Domenic Haynes (Team Adam)
Saved by America’s Vote | Matthew Johnson.
Saved by Adam | Domenic Haynes. So his coach really meant it when he said he’d do everything in his power to keep Domenic on his team. Also, gee — two Cross Battles results in, and already, Adam had used his Steal and his Save. 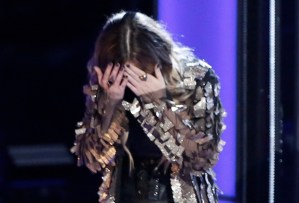 Maelyn Jarmon (Team John) vs. Rod Stokes (Team Adam)
Saved by America’s Vote | Maelyn Jarmon.
Stolen by Kelly | Rod Stokes. So maybe in the end, Kelly Clarkson wound up with a better country singer than she’d had in Jackson Marlow, whom you’ll recall she inexplicably cut to keep Abby Kasch following their Battle.

Celia Babini (Team Adam) vs. Oliv Blu (Team Blake)
Saved by America’s Vote | Oliv Blu.
Stolen by John | Celia Babini. Monday, John had suggested that it didn’t seem like Celia was really into the song that she had been assigned. Fingers crossed he will be able to pick her numbers with which she’ll be able to better connect, because as much as I love Celia, her Live Cross Battle was… oo, not good. Also, at this point, was anyone else thinking, “Is anybody getting eliminated tonight?”

So, am I nuts, or were the coaches crazy for using up so many Steals/Saves? Do you give a thumbs up or down to the Cross Battles format? Vote in the polls below, then hit the comments.