As we drew ever nearer to the end of The Voice’s Season 16 Battles Monday, we also closed in on what last week’s promo called “the twist no one will see coming.” Except for the fact that several websites have already predicted that the twist would be the replacement of the traditional Knockouts with Live Cross Battles. What are they, exactly? If the American version of the show follows the format of the international versions that have instituted Live Cross Battles, they pit members of different teams against one another and allow viewers’ votes, not the coaches, to decide the winners. Which certainly sounds exciting — power to the people and all. But before we got to those sing-offs — or even confirmation that that’s what the big twist is — there were more Battles to be waged. Let’s review them, shall we?

Team John: Lisa Ramey (Grade: B) defeated Betsy Ade (Grade: B-) on “The Joke” — Betsy stolen by Kelly | Prior to rehearsal, John Legend praised the duo as both being able to bring that “raw energy.” Once they hit the rehearsal room, Lisa sounded like she was connecting with their Brandi Carlile number better than I’d ever heard her connect with a song. Betsy, meanwhile, fired herself up by thinking of her son. On stage, Lisa started strong, singing with great control to her vibrato. Betsy kinda spoke-sang at the beginning, which seemed a waste of her powerful voice. When they teamed up on the choruses, it was pretty amazing. But Betsy struggled to nail her big, showoffy note, whereas Lisa sounded the way she looked: like a singer possessed by a number that really spoke to her. Love Betsy, but for me, Lisa was the winner. 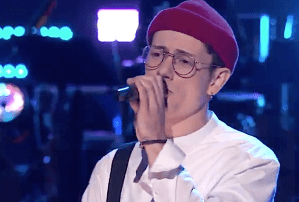 Team Adam: Mari (Grade: A-) defeated Anthony Ortiz (Grade: D) on “I Like Me Better” | In rehearsal, Anthony mentioned that the Lauv song he and Mari were assigned was “perfect for my tone.” But it sounded to me like it was at least as good or better for Mari’s. Adviser Charlie Puth marveled that she could “really hit all the notes.” Then again, he also likened Anthony’s voice to his own. So the high praise was flying. (And Anthony did sound kinda Puth-esque when he went into his falsetto.) When they took their places in the spotlight, Anthony had donned an outfit that mystifyingly made me ask, “Where’s Waldo?” Worse, his vocals fell flatter than flat — his breathy technique, Blake Shelton told him afterward, is “a neat thing that you’ve almost perfected” — whereas Mari sounded terrific. Her voice was big, well-modulated and just a freight train barreling down the track. This was no contest; Mari slayed. 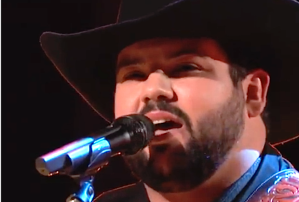 Team Blake: Andrew Sevener (Grade: B+) defeated Hannah Kay (Grade: C) on “Tequila” | Unlike those times when the contestants enter the rehearsal room and have to be told who their advisers are, Hannah and Andrew seemed genuinely starstruck to find themselves within the same four walls as not only their coach but Brooks & Dunn. Both Hannah and Andrew were a little intimidated by the prospect of tackling Dan + Shay’s au courant hit; she tends to sing Loretta Lynn, and he’s more a ’90s guy, he said. But they sounded like a freakin’ dream, in rehearsal and on stage. That rasp of Andrew’s went on for days — and I mean that as a compliment. Hannah sounded to me like she was having slight pitch issues and didn’t nearly as easily hit the big notes as her teammate did. Was it just me, by the way, or after dragging things out for the first half an hour, did the show suddenly fast-forward to Andrew and Hannah’s Battle? 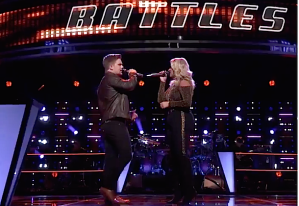 Team Kelly: Abby Kasch (Grade: D) defeated Jackson Marlow (Grade: C) on “Bring On the Rain” | In rehearsal, Kelly Clarkson told us that she’d given her competitors one of her favorite songs to perform. Jackson admitted that he was struggling to harmonize with Abby. At least his voice sounded as sweet as syrup on its own. On stage, oh dear. Abby struggled rather disastrously with pitch problems. Jackson didn’t exactly knock it out of the park, but he still sounded way better than his opponent. I could see, or rather hear, why the show opted not to show us this Battle in its entirety. Why Kelly chose Abby over Red Marlow’s nephew, however, is a total head-scratcher. It seemed to me like this was easily Jackson’s win. 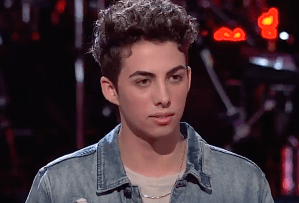 Team John: Jacob Maxwell (Grade: C-) defeated Talon Cardon (Grade: D) on “Every Little Thing She Does Is Magic” | Though the teammates were sure it was a good omen that they were both waiters who were the sons of cops doing a Police song, I approached this Battle with dread. Talon had been the worst of the Blinds, and the song seemed totally wrong for Jacob. Yet despite their dubious stab at the number in rehearsal, the most criticism they received from their coach and adviser Khalid was that they came off nervous. Later, John at least nailed them on a harmony problem. On stage, Jacob started off sounding just fine. Talon… not great, but not a train wreck, either. There’s just a cheesiness to him that I have trouble getting past. During the peppier parts of the ’80s classic, they both fell apart completely. “You looked like you were having a lotta fun,” Adam Levine said afterward. In other words, that was not good. So very not good. Given the fact that Talon’s voice cracked completely at one point, there could be no question that Jacob and his much-commented-upon looks would be named the winner of the Battle. 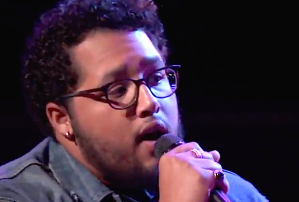 Team Kelly: Rebecca Howell (Grade: B) defeated David Owens (Grade: C) on “Unchained Melody” | In rehearsal, David mentioned that when he’d heard he was being paired with Rebecca, though she’s country, he, soulful, it kinda made sense to him because her voice transcends any genre. Aww. To give them each a chance to shine, Kelly assigned them “Unchained Melody,” then crossed her fingers that their confidence would increase as showtime neared. On stage, David sounded iffy out of the gate. “Oh, I love your tone,” exclaimed Kelly. But I couldn’t tell whether he was just using a ton of vibrato or as shaky vocally as he seemed. Rebecca, on the other hand, sang with great “Notice me!” oomph. They did sound awfully good when they sang together on the big choruses — by then, David had found his footing — but this was Rebecca’s to lose. Even Adam remarked that David in five years would be able to kick the David of today’s butt vocally. Kelly said she had a super difficult choice to make, but come on, did she really? As she noted herself, Rebecca doesn’t screw up.

Team Adam: Kalvin Jarvis (Grade: C) defeated Jimmy Mowery (Grade: B) on “U Got It Bad” — Jimmy stolen by John | In rehearsal, Adam warned that Kalvin had to work to keep his voice under control. Jimmy worried about how he’d manage to bring any swagger to the number since he wasn’t a dancer at all. When the guys got to the stage, they turned out a couple of the least energetic performances I can remember seeing on the show. Victims of another dubious Adam song selection, perhaps? Vocally, they weren’t bad, they just weren’t terribly exciting, save maybe Jimmy on those nice, long notes that he hit. He seemed to have the sweeter voice; Kalvin, the richer one, though he often squandered that richness by yelling the lyrics rather than singing them. I’d have given Jimmy the win. His vocals were, as John Legend noted, more piercing, and there was a spark of charisma to him.

So, what do you think the big twist will be? And who wowed you Monday night? Vote in the poll below, then hit the comments.