Don’t be fooled by his cuddly nature, love of learning and distaste for violence: Game of Thrones‘ Samwell Tarly is as much a schemer as anyone else in Westeros, series star John Bradley tells TVLine.

“What you’ve also seen from Sam, a lot of the time, is he holds a lot of influence over Jon himself,” Bradley says. “There’ve been so many occasions over the course of the series.” He cites the Season 1 episode in which Jon was furious that he was chosen as a steward, and not a ranger, of the Night’s Watch. “Sam is the one who reasons with him and tells him the importance of being a steward, and what’s going to happen with [Lord Commander] Mormont and all this stuff. And Jon changes his mind. Sam has got the power to make Jon change his mind.”

As we move more deeply into the show’s final season, Bradley adds: “Is there more opportunity for Sam to have an influence over Jon and influence over the way things turn out with Jon’s decision-making process? I think that there definitely is.”

Viewers saw shades of that in Sunday’s season premiere, when Bran tasked Sam with delivering a bombshell of a revelation to the former King in the North: Jon, who grew up thinking he was Ned Stark’s bastard, actually is the legitimate son of Rhaegar Targaryen, aka heir to the Iron Throne. As Jon reeled from the news, Sam — still in shock, himself, after learning Daenerys killed his father and brother —wondered aloud whether the dragon queen even deserved to rule, given her penchant for seizing power.

And we should probably pay close attention to that moment, given how Bradley describes his on-screen alter ego’s motives. 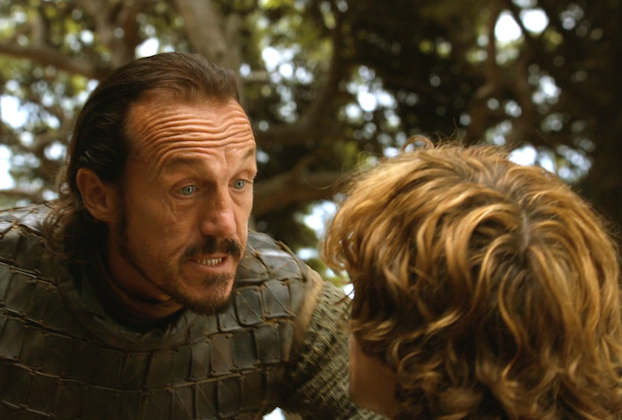 “When it comes to Jon, everything [Sam] does seemingly for other people — especially Jon — he’s helping himself, as well,” the actor notes. He points out Jon’s election to lord commander in Season 5. “Do you think that’s a great thing to do for Jon?” Bradley laughs. “He knows that if he does that, it’s the best chance he’s got of getting Gilly and Baby Sam and himself out of there.”

So the next time your heart is warmed by something Sam does, remember Bradley’s warning: “He’s as much a schemer and a manipulator as anybody else. He’s got his own and Gilly’s and Baby Sam’s interests at heart, more than anything else.”