I certainly hope you had a box of Kleenex within reach while watching Monday’s episode of The Resident. (And if you haven’t seen it yet, let me warn you: An ugly-cry is in your future.)

The Fox drama’s latest hour took a cue from real-life events, using the tragic story of Kira Dixon Johnson as inspiration for the episode’s lead storyline. Twelve hours after giving birth to her second child via C-section in 2016, Kira died of massive blood loss, and her husband went on to sue Cedars-Sinai Medical Center for wrongful death and negligence. (He also founded an organization, 4Kira4Moms, to advocate for improved maternal health care; watch more of his and Kira’s story below.)

In Monday’s episode, Devon assisted with a C-section for Lea Davies, a black woman giving birth to her second child. The procedure went smoothly, and Lea’s baby was delivered successfully — but when Devon noticed blood in Lea’s catheter after the surgery, his concerns were written off by nurses, as well as the OB-GYN who led the C-section. Even after Lea complained of stomach pain and became listless, she wasn’t given proper attention.

By the time Devon performed an ultrasound, revealing that Lea was bleeding internally, it was too late. She was pulled into emergency surgery, but ultimately died from blood loss. Devon, mortified by the outcome, accused Lea’s (white, male) OB-GYN of not giving a woman of color the proper attention, while Mina and The Raptor urged Dr. Bell to take serious action in the wake of the tragedy.

“It felt like a very, very important issue for families, but especially for expectant mothers,” executive producer Todd Harthan said of the show’s decision to tackle this topic. “That’s the beauty of the show — we get to find something that inspires us and really run with it.”

And Lea’s storyline wasn’t the only harrowing one in Monday’s hour. Conrad and Nic also had a tough conversation about their relationship, which ended with the couple on the verge of a breakup. Plus, Nic’s sister learned that her kidney failure is only getting worse, and she’ll likely have to spend the rest of her life on dialysis — that is, unless Nic is a match for a potential kidney transplant. 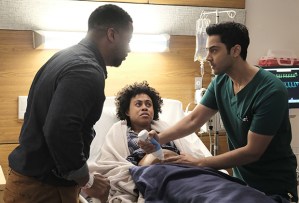 Below, Harthan offers more insight on Lea’s emotional storyline and teases the major arc that lies ahead for Conrad, Nic and Jessie as Season 2 comes to a close.

TVLINE | When did you and the writers decide to tackle this story based on Kira Dixon Johnson? It seemed like a topic you were passionate about, given the footage of Kira and Charles at the end of the show.
It dates back probably three or four months. Two of our writers simultaneously came upon Kira’s story, and it got sent to the staff. We do that quite often, where someone will come upon something, and we do this thing called Medical Mondays where we huddle as a group and talk about interesting and inspiring stories in the medical world, and that was one of them. And then we started talking about how we were going to make a compelling episode out of it and use the inspiration of what happened to Kira to fuel that episode… The studio and network were supportive of it, and we got, arguably, one of our better and most compelling — but also, hopefully, impactful — episodes of the season.

TVLINE | Devon, Mina and The Raptor seem especially dedicated to preventing situations like Lea’s in the future. Will we see this topic pop up again before the season ends?
For now, it’s contained. Had it happened earlier in the season, that would have been a real possibility. But now that we have been picked up for another full season, we never say something won’t come back on the show. We’ve had plenty of stories that I thought were not going to come back, and they did because someone came up with an inspired pitch. So I would say that it could absolutely come up again, but we just don’t have it in the cards this season.

TVLINE | This episode also focuses quite a bit on Jessie, who seems fairly hopeless when she’s initially told about her future on dialysis. How will she and Nic fare emotionally in the weeks ahead?
[This storyline is] a big part of the DNA of these last three episodes. The Nic/Jessie story has been such a rollercoaster, even before she had kidney failure and needed a transplant. The story we’re really telling is the strength of Nic and how she can put the weight of the world on her back and be there for everybody — her sister, her father, Conrad — without batting an eye. That’s her strength, and that’s going to get tested in these last few episodes. At some point, Jessie’s situation will become… not hopeless, but [Nic] will feel helpless. She will exhaust every potential option, and what she’s going to be faced with — which we think is going to be really interesting — is this moral dilemma. How far am I willing to go? What lines am I willing to cross to save my sister’s life?

You’ll get to see how her relationship with Conrad has affected her and pushed her, and potentially even challenged her own moral code, because his is so different from hers. That will come into play as she’s looking at her sister, who she’s sacrificed so much to save, and it really is a big question of how far she’s willing to go. That question will filter through and drive these last few episodes.

TVLINE | Speaking of Conrad, I was surprised to see how emotionally open he was with Nic during their big conversation in this episode — and Nic wasn’t quite as open as I was expecting her to be. What’s ahead for them, especially given Jessie’s health issues?
What the audience will hopefully appreciate about the ride they’re on is just how much Conrad and Nic are willing to give up, sacrifice or even change for each other. That’s what’s going to be tested in these last few episodes. We’ll continue to put certain obstacles in front of them, and it really does become about each of them being there for each other at their darkest and most difficult times — and it just so happens that Nic is the one going through this really harrowing experience with her sister. Will this be the one obstacle that they can’t get over as a couple? Will it break them? Or will it strengthen them? I think it will be a really inspiring story for them. We’re super excited about it, we’ve been building toward it all season. We are going to put them through the wringer in these last three, but I think the audience will be excited to see where they land.