Fresh off a relapse of his alcoholism and an achingly adult breakup, This Is Us‘ Kevin ended Season 3 by heading out to California to nurse his broken heart. Series star Justin Hartley says that before the episodes began to unspool, even he wasn’t aware of how much Kevin was banking on eventually having a family of his own.

“This Vietnam thing, this needing to find out what he’s made of, these answers to who his father was, these burning questions that he has — that created this whole thing that maybe wasn’t there in the beginning, that then led them to write this guy who needed to have kids,” Hartley tells TVLine.

He’s relaxed, sitting in a dressing room at New York City’s 92nd Street Y before a Q&A event. His wife, Chrishell Hartley (Selling Sunset, Days of Our Lives) and other members of Hartley’s team hang out, as well. Professionally, it’s been a good week: In addition to promoting the Marsai Martin/Issa Rae comedy flick Little, in which he plays a dashing school teacher, Hartley also has launched his own production company with 20th Century Fox TV, the studio behind This Is Us.

But at the moment, he’s focused on how Kevin’s desire for fatherhood snuck up on him, even though he played it off at first. “When you have that need to have kids, and the other person is never going to have kids, that’s a deal breaker,” Hartley says. “There are very few deal breakers. That’s one of them.”

The family drama ended its third season by showing us a good chunk more of the flash-forward it had teased in prior episodes. So, of course, that’s what we grilled Hartley about the most — starting with…

TVLINE | When did you become aware that, A) Kevin has such a sweet house in the future and that B) that he had a kid?
So, we know where the show’s going — and I might be speaking out of turn here, because I don’t write the show, obviously — but I have a feeling, the way it’s sort of been going, is that things come up that get written into the show that weren’t part of the original plan maybe… So, it was fairly recent. I don’t remember anytime in Season 2, thinking, “Oh, Kevin’s going to be a dad.” But we still don’t know who the mom is.

TVLINE | Do you know who the mom is?
No. [Pauses] I don’t want to say no. I tell you what, if I say yes, it gives… I don’t want to tell you if I know or not. How about that? [Chrishell Hartley laughs in the background and asks, “What kind of answer is that?!”] Yeah. That’s a s—ty answer. Listen, I just gave you a s—ty answer to a really good question. Now you get to ask me a s—ty question, and I have to give you a really good answer.

TVLINE | I’ll save that for later, for another interview.
Okay. Great. Okay. Yeah, you got me, and I owe you. 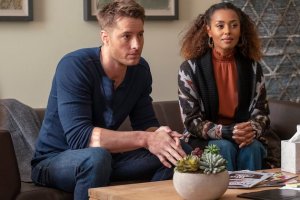 TVLINE | Obviously, the break-up with Zoe isn’t easy for Kevin. We see him decamp to California. Have you had any conversations with producers about what his life will look like next season, or what the overall tone will be for him?
Yeah. I mean, so these kind of things that happen with him. He’s an addict, and he has a personality that is everything in excess, right? He loves too much. He worries too much. He doubts himself too much. He drinks too much, He pops too many pills. He doesn’t sleep enough. It’s like he’s a blur, you know? He has these tools now — and he’s got a sponsor — and he’s figured out that if he uses these tools, he can calm himself down enough to where he can re-center. So he needs to keep his hands busy.

And this whole thing with his uncle, those questions never got answered. [Kevin] found him, and he got a few answers, one being, “That’s too much for me, I don’t really want to reconnect with the family.” But other than that, there was nothing, so that could come around in a big, big way in Season 4. I don’t know if it will or not, but it could in a very, very, very, big, big, big way. But I don’t know. [Laughs] That’ll be interesting if it happens, and I think he’ll be really busy with that.

And then we don’t know exactly how many years in the future [the flash-forward] was. There’s a kid like, 10? 12? We don’t really know.

TVLINE | I think executive producer Isaac Aptaker said it’s about 12 years in the future.
Right. So he could be 10? 8? We don’t really know when that happens, what that relationship looks like. So I’m sure that we’ll get into that in Season 4, and we’ll have a lot more questions.

TVLINE | Do you have any idea when that might be coming to you?
I would imagine it’ll be next season… No one’s told me specifically like what day, or what year, what season, or even if. But you’ve seen his son, we’ve been in his house. We see that his mom is in a bed there, on what looks like her deathbed, and so you assume that he’s taking care of her. He’s not Santa Claus — we’ll see him — but I would imagine it will be this year.