Patricia’s fight against her recurring cancer officially begins in this week’s The Village, but series star Lorraine Touissaint wants you to know that her storyline will be tough, yes, but it won’t be all IV drips and worried glances.

“Just chemo in itself, that’s a monster. And she’s still going to try to be very private. Ron’s going to be the one who takes the brunt of it because he’s on the front lines with her,” she says, adding that the other members of the titular apartment building will help where and when they can. “And I’ve got to tell you: It’s not all heavy. There’s some funny stuff that goes down, too… She leans into members of this community that she would not expect to lean into and come together with.”

The episode — which airs in its new timeslot, 9/8c, on NBC — picks up two months after the events of Episode 3. As you can see in the exclusive clip above, Patricia undergoes chemotherapy with her biggest cheerleader by her side. But as we got an inkling of in last week’s hour, Ron’s unflaggingly positive brand of support isn’t always exactly what Patricia needs.

“She’s gone through this before with Ron, taking care of Ron, making sure he’s OK,” Touissaint says. “It is more energy than she knows she’s going to have, so some some of it is just trying to set the stage for her own coping.” The actress says she suffered “very violent migraines” for years and remembers only wanting her mother around when she was having an episode. “Anyone else being there is burdensome, because you really don’t want to throw up on anybody,” she says, chuckling. 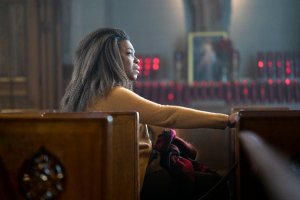 In need of a little girl time, Patricia will seek respite in a night on the town with neighbor Sarah. In Tuesday’s ep, “They go out and get drunk,” Touissant previews. “She is determined to celebrate in her own way, celebrate life… And then, of course, it backfires, and she pays the price.”

But before the hangover gods can smite her, we hear there’s a little karaoke action?

“Oh dear God, yes,” Touissaint says. Even though she’s played badasses like Orange Is the New Black‘s Vee and Into the Badlands‘ Cressida, she admits that the idea of singing in front of a room full of people gave her serious pause. “That, for me, was the scariest moment in the entire season.”