What other surprise awaits Lucifer‘s Chloe? Could Arrow kids get spun off? Is New Amsterdam ready to deliver? Read on for answers to those questions plus teases from other shows.

Anything new on Lucifer? I’ll take literally anything, please. —Paola
Chloe can’t be faulted for assuming that she is the only human, and certainly within her circle of friends, to know Lucifer’s true identity. So as you can imagine, it’s quite an amusing moment when she discovers that is not in fact the case. Talking to Maze, “She’s like, ‘You don’t know the pressure of being the only human that knows this…,’ and Maze is like, ‘Well, I’ve got to be honest, Linda took it a lot better than you did,'” Rachael Harris shared with me on set. “And Chloe’s like, ‘Wait, what?!'”

Do you have anything on Arrow‘s Season 7 finale? –Morgan
You mean the episode that gave Stephen Amell literal goosebumps once he read it? And that now stands to be Emily Bett Rickards’ final episode? “All I have to say is the finale script, almost everyone who read it was in tears,” showrunner Beth Schwartz tells TVLine. “I’m very happy with it, and I think the audience is going to really like it.”

Any rumblings about making Arrow‘s Kat McNamara, Ben Lewis and Joseph Jones series regulars for the final season? Or maybe a possible spin-off is in the works? —Stephanie
We did ask Schwartz if the all-flash forwards episode, “Star City 2040,” was envisioned as a backdoor pilot of sorts for a possible offshoot. “It was definitely meant to grow the world that we had already built and to see the next generation of what Oliver and Felicity and our present-day team have worked so hard for, and sort of see what happens in the future,” she answered. “We love those characters and would love to see them go on in some capacity after the show’s over,” possibly via crossovers with the remaining Arrowverse shows. “We were so happy, internally, about how it came out,” she added. “We kinda love our future story.”

Because it’s The Magicians, I’m almost certain we’ll be left for months with an intense cliffhanger. Any scoop for the rest of Season 4 and when they’ll start up on Season 5? —Ness
I delivered your Q to showrunner Sera Gamble, and here’s her tantalizing response: “The rest of Season 4 is crazypants and the finale is extra crazypants — the kind of bananas you have to shoot in super-slow motion because so much is happening in a single second.” Looking ahead, she said, “We are already hard at work on Season 5, which so far is full of love, loss, mixed beverages, and possibly a spell or two that were in hindsight extremely poor life choices for the casters.”

What’s the plan for Grey’s Anatomy‘s Schmico? Will Levi and Nico have any significant screen time together in these last few episodes of the season? —Jon
The good news: There is some great screen time ahead for Schmico. The bad news? Their nascent relationship is heading for a road bump. 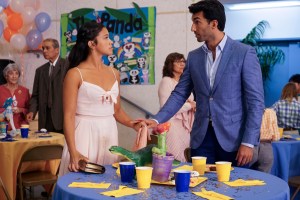 Will Jane the Virgin end with flash-forwards? —Mino
“It’s a closed-ended story that ends,” says showrunner Jennie Snyder Urman. “There’s a few things you’ll learn, or that’ll hint towards the future, but it’s not about flash-forwards,”. Bonus Scoop: Michael’s return isn’t the only big twist his portrayer Brett Dier has had to keep mum about. “There are like four of five big secrets in the next little bit with Michael,” teases the actor, who actually went to Montana for research and put on 25 pounds of muscle to play Michael/“Jason.”

What’s the early buzz on Game of Thrones’ final season? Were you at the premiere? —Dee
I was washing my hair that night, because our go-to Game of Thrones expert had things well handled. Here’s what Kim Roots had to say about screening the final season premiere: “I really enjoyed the return to Westeros. The show wastes no time getting the action underway, and the reunions were very satisfying. The last minute or so, especially, made me holler with enjoyment.”

Can you give me some scoop on The Rookie? —Laura
Afton Williamson, who plays Talia, told me that the season finale (airing April 16) is no less than “insane. I mean, we already had an earthquake, so don’t even ask what’s coming up next.” I however did, and she promised “a cliffhanger that’s out of this world”, which she expects to have fans asking her questions “throughout the entire hiatus.” 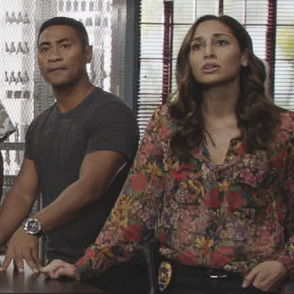 Does Hawaii Five-0‘s ‘Ship Shape entry mean that Junior and Tani are moving in a romantic direction? —Trent
There is a wedding in their future, I hear. Not theirs, of course, but that of Tani’s friend, setting the stage for an interesting “plus-1” situation that could lead them to see each other in a new light.

Are we going to see Luna’s birth this season on New Amsterdam, or will we have to wait until next season because Lisa O’Hare is on maternity leave at the moment? —Rachel
“The last episode is titled ‘Luna,’ if that’s any indication,” showrunner David Schulner answers. “As we established in the pilot, Georgia’s had a difficult pregnancy. She was diagnosed with placenta previa in the pilot, and so I think it’s fair to say that complication will be a part of her delivery.”

Any word on when we might see Ozark Season 3? –Jordan
Production on the Netflix drama begins in May and rumor has it producers are looking to introduce Wendy’s (Laura Linney) never-before-seen younger brother, who’s apparently a bigger monster than his increasingly unhinged and morally vacuous older sis.

Anything on Good Trouble? —Rebecca
Now that Mariana has kissed Raj, “They’re going to explore their relationship” in Season 2, says executive producer Joanna Johnson. But it’s “difficult to date someone at work, especially if you don’t really want to go public with your relationship because of the kind of teasing or harassing you can get from all those ‘broholes,’ as [Mariana] calls them.” Bonus scoop: Johnson says we’ll “absolutely” see Fosters family members in Season 2. In fact, the show is trying to do “something very special” on that front, which Johnson predicts “fans are going to love” if it all comes together. 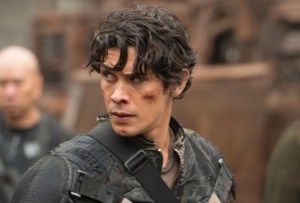 Any chance Bellamy and Echo finally break up in Season 6 of The 100? —Meredith
Sorry to (apparently) disappoint you, but it sounds like the couple is stronger than ever as we head into Season 6. “She understands loyalty, I think, more than anybody else,” Tasya Teles says of Echo. “With her clans and with her Spacekru and with her family, she understands that certain relationships are sacred and she has trusted these people as her new adopted family. There’s a lot of trust and there’s a lot of support.” As for Echo and Clarke, that relationship hits “highs and lows,” Teles says. “Echo sees herself in a lot of Clarke’s struggles and understands what Clarke is going through. Clarke has also saved Echo’s life several times, and she’s indebted to Clarke, so there is understanding and respect.”

I want to know anything you can tell me about Sean Maguire’s character on The 100. Thank you! —Gabbi
I can confirm that TV’s erstwhile Robin Hood now has his sights set on playing the leader of the original Eligius 3 mission.

I would like to know the status of Neo Yokio (Netflix), Dimension 404 (Hulu), and Trust (FX). —Gabriel
1) Thank you again for narrowing down the list of 30 (!) shows for which you initially emailed me BOLOs.
2) As for the three you picked, it goes like this: nothing new to report at this time; it was always meant as a one-and-done anthology; FX is completely mum.

Can you inquire about when Season 2 of Dark will return? They announced it in 2017, I believe. —Michael
You can count on Dark returning to Netflix later this year.

Can you tell me if BET’s In Contempt is renewed or cancelled? —Dragonsi
There has been no movement, either way, since I first checked on this [checks calendar] seven months ago.

What happened to Logo’s Finding Prince Charming, which was renewed for Season 2 waaay back in the fall of 2016? —Dylan
I asked around and came up with nada. Sorry, nothing to report at this time.

Real questions from real people get real answers! If you need the Inside Line on a favorite show, email InsideLine@tvline.com! Questions left in Comments will not be read and may count against your final score. (With reporting by Vlada Gelman and Andy Swift)